Is It Just A Job?

I have come to a somewhat painful realization that I guess I have not wanted to accept.  PLW says I have been a romantic idealist and I need to face the truth.  This unwanted reality involves our military and their reasons for serving, and I so desperately want to be wrong.  But I'm afraid that for a certain segment of our armed forces, my fears may be too realistic.  Let me explain .... 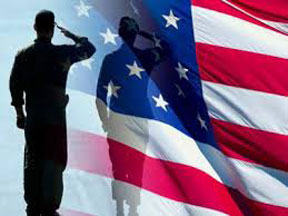 How many times have you thanked our young members of the military and they have humbly replied, "You don't need to thank me; I am just doing my job."  I've always assumed they were just being modest or self-deprecating.  I've always wanted to believe that they are serving in the military out of the same love and respect for our country that I possess; that they recognize the nobility of our nation's founding principles and they are fighting to protect what is uniquely American.
First of all, let me say that I have no doubt this is true of most of our servicemen; especially the older ones who have served in previous conflicts or wars.  They "get it" and their service is from the heart.  But after this last trip to Fort Sam Houston, and an extended conversation with some of the wounded vets and their wives, I'm beginning to form a different picture; one that isn't quite so sentimental.
I know for a fact that many of these young people join the military because it provides them with a means to an education.  But it is becoming more apparent that for some, it is exactly what they are telling us it is .... it is "a job".  One young couple tried to thank me for coming to serve them through our ministry Angel Chefs.  But when I told them we were there to thank them for their sacrifice, they repeated the oft-spoken phrase, "We're just doing our job."  Of course, I'm assuming that once again, they are just being polite, so I tried to explain that we appreciated what they sacrifice for us so that we can live in freedom and liberty; that we are in awe that they would be willing to fight in our place so that we can continue to be a free nation.  But they said, "We don't look at it as a sacrifice."  They expressed the security they felt within the brotherhood of the military and that they had been trained to do a job and they weren't happy in the civilian world; they just didn't fit in.  He enjoyed what he did, what he had been trained for.  I had to accept the truth ... he enjoyed his job.
Then it dawned on me.  For this couple at least, serving in the military was not the patriotic, emotional sacrifice for "love of country".  It was more practical, or pragmatic.  This was his chosen method of employment.  And once I had made this painful discovery, it opened the door for more disquieting thoughts.  Things began to make a little more sense, whether I wanted to admit it or not. 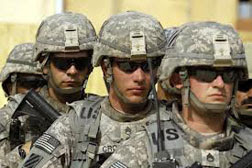 These kids (because that's what many of them are) did not receive the same education I did.  In grade school, they didn't study the history of the founding of this country in the same way; they don't know the stories of Patrick Henry, Samuel Adams, Nathan Hale or Daniel Morgan.  They weren't brought up believing that America was an exceptional nation.  Their grandfathers likely fought in the Vietnam War, which I don't have to tell you was not a celebrated victory for this country.  Serving in the military likely was not encouraged from a flag-waving standpoint, but rather from an economic one.  It provided steady and guaranteed work.
And I can only guess at the training they received and the mentality of their superiors.  Did they instill patriotism or was it their job to create a workforce of soldiers that would follow orders?  I don't mean to sound cynical or downhearted, and I am sure there are some military members that will vehemently deny my supposition.  I am also aware that there are differences between the military branches of service.  So I do not want to paint a broad brush across all branches or on all service members.  But I would really like to believe, with all my heart, that these young men and women who take an oath to uphold the Constitution of the United States know what that document represents and what it stands for.  I don't want to think that their oath is hollow and meaningless to them; something they were instructed to do, and therefore it is an empty promise.
Because that Constitution represents us -- we, the people -- and if they are simply "doing their job", then what happens when their "job" involves going against that precious document.... and us?  Where will their loyalties lie?  And will they know to whom they owe their allegiance?  These are thoughts that disturb my soul.....