Corn Isn't The Only Thing Being Modified 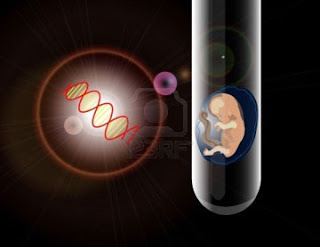 This may be a disturbing post, but it is something that needs to be talked about.  This is going to sound crazy, but if you will hang with me, I am going to give you a Biblical perspective on the reality (and the subsequent danger) of dabbling with genetically modified children.  (I told you it would sound crazy!)
PLW brought an article to me that he found on SteveQuayle.com.  It was posted on the UK's DailyMail site and reported that fertility pioneer, Professor Jacques Cohen, had successfully completed experiments that resulted in "human germline genetic modification resulting in normal healthy children".  In laymen's terms, that means that they took eggs from donors and, using a fine needle, sucked some of the internal material - containing 'healthy' mitochondria, and injected it into eggs from women wanting to conceive.  Because mitochondria contain genes, genetic fingerprint tests on the resulting babies show that they have inherited DNA from three adults --- two women (the donor and the recipient) and one man.
The article went on to say that Jacques Cohen is regarded as a brilliant but controversial scientist who has pushed the boundaries of assisted reproduction technologies.  He developed a technique which allows infertile men to have their own children, by injecting sperm DNA straight into the egg in the lab.
Prior to this, only infertile women were able to conceive using IVF.  Last year, Professor Cohen said that his expertise would allow him to clone children --a prospect treated with horror by the mainstream scientific community.
But here's the problem:  That article is more than 10 years old, as confirmed by another article on LifeNews.com.  But far from alleviating any serious concerns, this second article only justified my unease.  It seems that this technique is known as "cytoplasmic transfer", and so disturbed the FDA that they banned it.  Apparently, the FDA argued that genetically manipulated embryos are a “biological product,” and therefore subject to regulation, just like medical devices and drugs.  So Professor Cohen left his Institute for Reproductive Medicine and Science of St Barnabas in New Jersey and works for a U.S. military hospital.  (Still troublesome, as far as I'm concerned).
But it shouldn't be surprising that there were those fertility centers who disagreed.  One such clinic, known as Clonaid, was run by a group known as the Raelians.  By now, you're asking, "Who are they and of what importance is that to this subject?"  Well, here is where it all ties into a Biblical perspective and a precise warning from Jesus.
First we need to know who the Raelians are and why their involvement with infertility clinics is so frightening.  Here is the philosophy of the Raelians, as stated on their website:  (WARNING:  This will sound completely insane, but I will show you where the Bible references this kind of false doctrine).

Thousands of years ago, scientists from another planet came to Earth and created all forms of life, including human beings, whom they created in their own image. References to these scientists and their work can be found in the ancient texts of many cultures. Due to their highly advanced technology, they were considered as gods by our primitive ancestors and often referred to as 'Elohim' which in ancient Hebrew meant 'Those who came from the sky'.
Despite being a plural word, Elohim was mistranslated over time to the singular 'God' reference that appears in modern-day Bibles.   (This is pure blasphemy!)  Nevertheless, these people who came from the sky (the Elohim) educated humanity through the ages with the help of various messengers (also called prophets) with whom they had made contact. Each messenger was given a message suitable for the level of understanding prevailing at the time, with the primary purpose of instilling basic principles of non-violence and respect. Once humanity reached a sufficient level of scientific understanding, the Elohim decided to make themselves more visible in UFO sightings and to conceive their final message. Rael was given two missions: spreading that last message on Earth and preparing an embassy to welcome the return of our creators.
The atheist 'Intelligent Design Theory' offers a rational solution to the age-old debate between God-believers and evolutionists. It’s compatible not only with today's scientific discoveries but also with the ancient historical accounts of all cultures.

I know it sounds like a science fiction movie, but if you are a serious student of the Bible, then bells and alarms should be going off in your head!  Not only is the explanation of "Elohim" completely false, but their version of who "came from the sky" is also fraudulent.  Let me share just a couple of verses from Scripture and you will know why this made the hair stand up on the back of my neck.  Genesis 6:1-4 says,
"When human beings began to increase in number on the earth and daughters were born to them, the sons of God [fallen angels] saw that the daughters of humans were beautiful, and they married any of them they chose. Then the Lord said, 'My Spirit will not contend with humans forever, for they are mortal; their days will be a hundred and twenty years.'  The Nephilim [offspring of fallen angels and human women - sometimes translated as "Giants" in the Bible] were on the earth in those days—and also afterward—when the sons of God went to the daughters of humans and had children by them. They were the heroes of old, men of renown."  And what followed?  God grew tired of the genetic mutations subjected on mankind, and executed the Flood, to wipe out all the unnatural gene pools.
The Raelians are atheists who reject the Creation theory and have adopted a perversion of the Gospel; they actually contend that human beings were genetically engineered by aliens.  As stated in their official premise, they believe that we were created not by Elohim God, but by Elohim, "aliens from the sky."  Furthermore, Clonaid, the infertility clinic run by these nuts, have announced their intentions to clone a human being.  Can there be any more perverse action against the Word of God?
To top it off, there is still a controversy as to the legality of cytoplasmic transfer.  When asked if the procedure was legal, Dr. John David Gordon, the Co-Director of Dominion Fertility at The George Washington University and an expert that has been answering questions on high tech IVF for more than ten years, replied, “I honestly have no idea…”
Well, I don't have a medical degree and am obviously not a trained bioethicist, but I do have an idea... and all this genetic modification goes against everything my God has declared holy!  Because Jesus himself said in Matthew 24:37 ... "As it was in the days of Noah, so it will be at the coming of the Son of Man."  What he meant was this:  I abhorred the defilement of my Creation in the days of Noah, and wiped them out through the Flood.  Just as I did then, I will do again when Jesus returns.  Make no mistake about it, the prophecies of the Bible are true!
But also, be forewarned that the kinds of perverted philosophies as proclaimed by the Raelians are running rampant through our culture.   In Tom Egeland's book Gospel of Lucifer, Nephilim are referred to as mysterious extraterrestrials who came to the earth over 5000 years ago, to help us advance as societies by teaching us math, physics and technology.  Do you see how Satan could take God's Word, distort it, and entice our younger generation with tales of aliens?  It's hard to imagine that anyone could fall for such nonsense, but both our popular culture and technology are being used to misguide and mislead those who are not grounded in God.  The Unsaved are just one step away from worshipping Satan's counterfeit gods.  If they can be convinced that the Nephilim are the "good guys", then can Jesus be far away?

2 Corinthians 11:13-14     "For such people are false apostles, deceitful workers, masquerading as apostles of Christ. And no wonder, for Satan himself masquerades as an angel of light."