How Do They Sleep At Night 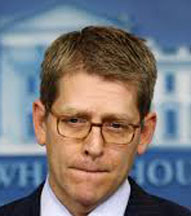 I tried to feel sorry for White House Press Spokesman, Jay Carney, yesterday; I really did.  But the weak attempt to cover up the lies of this Administration just made me yell at the television.  Although the MSM has now decided they can no longer deny the deception in the Benghazi scandal, I still felt as though they didn't pursue the truth hard enough.
You know what?  I'm tired of the lies, and I'm tired of the politicization of issues that effect our freedoms and the transformation of America.  How stupid do they think we are?  And "they" includes everyone in the political arena.  For the moment, it looks as if the Republicans are interested in getting some long-awaited answers as to who made the decisions to abandon Americans during an Islamic extremist attack.  Will they persevere until the entire truth is revealed?  Time will tell.
But the fact is that ABC News is now saying they received twelve different editions of the White House talking points, with the final version eradicating all references to jihad, Islamic extremists, terrorism, and Al Queda.  (For a hard-hitting exposé, read this article.)  Ultimately, the White House spokesman stuck to his lie that "only one stylistic change" was made; the word consulate changed to mission.  Take a look at the following comparison of talking points issued by the White House, and make up your own mind.

As if this is not enough, Carney again threw the CIA under the bus, stating that they were responsible for the talking points.  He kept trying to stress that it was "an interagency process to develop the information about what we knew."  I think the most ridiculous excuse Carney came up with was that the Administration "could not know the relevancy of the warnings" coming from the American embassy in Tripoli.  I have a very simple question, Mr. Carney .... why didn't the Administration rely on the intel on the ground?  Gregory Hicks, the Acting Deputy Chief of Mission, told Secretary of State Clinton directly that they were under attack that very night!  There is no way around it--they knew that night that our mission in Benghazi was under attack and they chose not to rescue those men.  The American people want to know WHO made the changes and WHY.   Perhaps even more importantly, the families of those who were sacrificed deserve the truth.
Stop blaming the Republicans, a misguided ad by Mitt Romney, and, yes, even George W. Bush's administration (they're still playing that card!)  Fess up and take responsibility for your poor judgment!  Stop trying to blame others and be accountable!  Repeating the same lies over and over again, doesn't make them true.  And just because you offer a half-truth today, doesn't erase the fact that you lied to us nearly eight months ago.  And just because you decided to hold your press conference on a Friday afternoon, to try to limit the damage, we will not let this scandal be so easily dismissed.  Your actions are incompatible with the character of our nation, and we have been betrayed.

Proverbs 19:5    A false witness will not go unpunished, And he who speaks lies will not escape.