Have you ever become interested in a subject and find that your research begins to peel off layer after layer of significance?  That's what I'm finding with the attempts to genetically engineer our food supply.  I've talked about the big seed companies and their influence in the halls of Congress, as well as the impact they are having on the sustainability of our food sources; never mind altering the nutritional value of what we eat.
Well, now, let me take you one step further and inform you of something else companies like Monsanto and Dow are effecting.  It seems that there is a dramatic loss of bees in Europe and North America. As many as 50 percent to 90 percent of the bee populations have simply vanished, leaving their hives empty, resulting is what is knows as colony collapse disorder (CCD) in honey bees.
Everything from mites, cell phone radiation and viruses have been suspected, but now it seems the cause is much more familiar .... the Bayer Pharmaceutical Corporation.  The reason that the bee colonies are collapsing is due to poisoning with a known insect neurotoxin called Clothianidin, a pesticide manufactured by Bayer to address a rootworm problem that was infesting the world's corn crop.  Now, Bayer knew that its pesticide was highly toxic to bees but claimed that, because it would be applied to corn seed and would be buried in the soil, it would be harmless to other creatures.
But here's the problem .... Farmers were instructed to buy special machines to apply Clothianidin to their seeds with a special adhesive seed coating manufactured by ..... guess who? ..... Monsanto!  The poison is supposed to stick to the seed coat and to be toxic to the rootworm. These poison-coated seeds are now growing all over the globe.
Here is where it gets real disturbing:  According to a 2003 statement by the EPA, "Clothianidin is highly toxic to honey bees on an acute contact basis (killing 50% of tested populations at greater than 389 mg/kg). It has the potential for toxic chronic exposure to honey bees, as well as other nontarget pollinators, through the translocation of Clothianidin residues in nectar and pollen. In honey bees, the effects of this toxic chronic exposure may include lethal and/or sub-lethal effects in the larvae and reproductive effects in the queen."
In order to understand the full effect of these findings, there are some things you need to know.  First of all, the food chain is a delicate system.  It would be very hard to re-balance a food chain if it was thrown off dramatically. Especially if something vital or basic was taken out. This is just the case when it comes to the decline of the Bee population. They give us so much, that if this decline continues, the food chain will be affected dramatically. 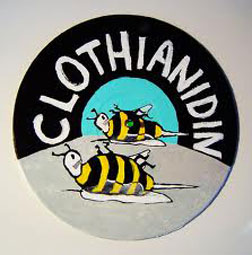 It's as simple as this:  Bees are  primarily consumed by spiders and birds. So if they were to continue to decline, these animals would have to find a new food source.  If these animals fail to do that, then whatever animal feeds on them would need a new food source.  Picture this continuing on down the food chain until some species even become extinct.  It's not hard to see that the basic food web will drastically change with the absence of Bees.
But it's not just animals that will be affected.  Since bee’s pollinate and stabilize over 70% percent of plants, you can see how their absence could affect the very survivability of mankind.  If plants are not pollinated, they die, and animals (including man) who rely on plants for food will be competing for ever-reducing food supplies.  And let's not forget that plants like cotton serve to clothe us, and so it's not just our food source, but our very way of life that is at stake.
For those of you who need to calculate a financial cost of the disappearance of the bee colonies, here it is:  Bees pollinate about one-third of the human diet, $15 billion worth of U.S. crops, including almonds in California, blueberries in Maine, cucumbers in North Carolina and 85 other commercial crops, according to the U.S. Department of Agriculture. It goes without saying that not finding a cause of the colony collapses could prove costly.
If your blood is not boiling by now, then here's a little known fact that will send you over the edge:  The EPA granted conditional registration for clothianidin in 2003 and at the same time required that Bayer CropScience submit studies on chronic exposure to honeybees, including a complete worker bee lifecycle study as well as an evaluation of exposure and effects to the queen.  According to Aaron Coalangelo, an attorney for the Natural Resources Defense Council, those studies have never been released.  "The public has no idea whether those studies have been submitted to the EPA or not and, if so, what they show. Maybe they never came in. Maybe they came in, and they show a real problem for bees. Maybe they’re poorly conducted studies that don’t satisfy EPA’s requirement."  It has been ten years since that study was supposedly conducted!  How many bee colonies have disappeared in the last decade?
You can read the EPA's response to various petitions by beekeepers, honey producers and pesticide watchdogs, but don't get your hopes up that they will put the welfare of the bees, or ultimately mankind, over the profits of Monsanto and Bayer.  This is just one more example of messing with God's creation that will result in dire consequences for us all.

Psalm 104:27-29     All creatures look to you to give them their food at the proper time. When you give it to them, they gather it up; when you open your hand, they are satisfied with good things. When you hide your face, they are terrified; when you take away their breath, they die and return to the dust.
Posted by Pam Kohler at 7:00 AM