The Truth About The Economy

Last week I published my 500th post, and look how far we've come down this path since the first day I decided to share my thoughts!  I want to thank everyone who encourages me to continue writing, and I want you to know that I am honored that you give a small part of each day to consider my opinions.  I am no different than you, and we are all concerned about the state of our country and the world.  It amazes me that readers from all over the world tune in to this small blog; I have no power and no real influence.  But to know that even one person from China, Pakistan, Ukraine, Latvia, Poland, many other countries, or my beloved United States receives a glimpse of how the Lord is working in my life, is very humbling.  Thank you for sharing your time and your comments.  On towards the next 500 posts!

Until the last few days, the Mainstream Media would have you feeling pretty good about the state of our economy.  The stock market has been up; the unemployment rate is falling; retail sales are increasing; and the dollar is getting stronger.  The MSM has been extremely optimistic about our future! 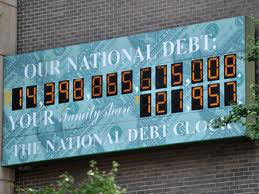 But with the recent events in Boston and Texas, the stock market is taking a dive.  These are only distractions, as are the losses in the paper market for gold and silver.  And if you listen to the media puppets, the days of gold as a viable hedge are over.  (However, bullion sellers are reporting a sharp incline in sales).  I'd love to tell you that I'm buying into their misleading mumbo jumbo.  But you see I don't really believe anything they're forecasting right now; nothing makes sense!
Money is fleeing Europe into the U.S. dollar, because there is nowhere else to go; but that will most likely be temporary.  And the gold sell-off is happening in Europe to cover debts; and in the U.S. to cover margin calls on a panicked Wall Street.  I wouldn't be surprised to see the stock market climb again in the next day or so.
But all this shouldn't cause us to take our eye off the massive national debt.  I will confess that I don't understand how the facts and figures are being manipulated; I just know that our economy -- and the world's -- is far from healthy.
The signs are everywhere:  Bitcoin, the online digital currency, was supposedly safe from governmental interference; yet it is crashing.  Besides the plunging prices for commodities like gold and silver, the price for oil and the demand for energy is declining, as well.  Just look at the collapsing markets in Europe and the lack of consumer confidence here at home, and you get a pretty accurate picture of failing economies.
Various economic sources say it feels eerily like 2008, when we felt like "something bad was coming."  And since our economy is becoming increasingly intertwined in a One World Economy, we have to take into consideration how the economies of other countries affects ours.  While the indicators I've already mentioned appear to be forecasting a gloomy financial picture, there are also other signals that all is not rosy in the land of economics.
Retirement Accounts.  According to Wells Fargo, the number of Americans taking loans from their 401(k) accounts has risen by 28 percent over the past year.  "Of the participants who took out loans, the greatest percentage were to people in their 50s (34.2%), followed by those in their 60s (28.9%) and then by those in their 40s (27.3%). The increase among participants in their 50s was nearly double the increase among those under 30."
It's not hard to figure out why.  Rising costs of food, health care and property taxes make it difficult for people to live within their means.  The worry is that by the time these folks actually retire, there won't be anything left.
Casino spending is one of the most reliable indicators about the overall health of the economy.  Interestingly enough, casino spending crashed during the last financial crisis as well.  That is why it is so alarming that casino spending is now back to levels that have not been seen since the last recession.
Employment numbers in Greece.  Over in Europe, things just continue to get worse.  According to numbers that were just released, the unemployment rate in Greece has soared to 27.2 percent, which was up from 25.7 percent the previous month.  That means that the unemployment rate in Greece rose by 1.5 percent in just a single month.  That is not just a crash - that is an avalanche of unemployment.
European Finances.  European financial stocks have been hit particularly hard lately.  And for good reason actually -- most of the major banks in Europe are essentially insolvent at this point -- hence, the selling of gold reserves.  This week, European financial stocks fell to seven month lows, and this is probably only just the beginning.
The Cyprus Situation.  This is the most frightening for me.  It can't be a good sign when a country's solution to its financial problems is to confiscate the private money of its citizens.  Couple this alarm with the number of Spanish companies going bankrupt rising by 45 percent over the past year, and you begin to wonder if these are the beginning of a domino effect. 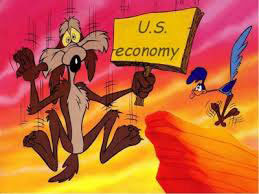 Demand For Energy.  Just like we saw back in 2008, the overall demand for energy in the United States is falling rapidly.  When people's incomes and savings decline, so does their use of energy.  They  curtail their driving and gasoline usage, and alter their thermostat temperatures.          While the environmentalists think it is good for people to use a bit less energy, it is also a clear indication that economic activity is really starting to slow down.
So now, I have just one question .... with all these indicators of stressed domestic and international economies, why have the Dow and the S&P 500 been setting new record highs?  It just doesn't make any sense!  And why would you put your confidence in something that goes against all the economic fundamentals?  Any Economics 101 student can tell you that the stock market is not functioning in reality.
In an interview on CNBC's Squawk Box, Economist Marc Faber said, "If [the stock market] continues to move up, the probability of a crash becomes higher."  He also said, "It could happen sometime in the second half of this year."  But the rest of the MSM talking heads want you to think that this stock market bubble can go on indefinitely.  But as other more level-headed economists have pointed out, isn't a bubble always biggest right before it bursts?
Unfortunately, a great percentage of Americans choose to listen to those who lull them into a false sense of security.  A recent CNN poll claims that Americans are now more optimistic than they have been in six years.  Somehow, I can't help but see these folks as walking in the shadow of those people who refused to listen to Noah.... and then the rains came.

Psalm 52:6-7      The righteous shall see and fear, and shall laugh at him, saying, “See the man who would not make God his refuge, but trusted in the abundance of his riches and sought refuge in his own destruction!”