I have mentioned before that we Christians in America are just beginning to feel the spread of persecution against our faith.  For those who share our faith around the world, persecution is a very real and threatening reality.  I am not trying to be a fear-monger, but I think it is time that we prepare ourselves for the spread of this threat to our doorsteps.   It does us no good to think that we will escape what the Bible tells us is coming.
It is for this reason, that I highly recommend the book, Persecuted; The Global Assault on Christians.  The book paints an honest picture of the forces attacking Christianity around the world.  Christians in Ethiopia are undergoing extreme attacks; many mirroring this alarming story:  In May 2011, Abraham Abera, a worker at an Evangelical church, was walking home with his pregnant wife, Bertukan. Suddenly, six Muslim men wielding machetes assailed them beating Abraham to death and leaving Bertukan unconscious. She and the baby survived and as Bertukan recounts the attack she recalls the men's words: "You [Christians] are growing in number in our area. You are spreading your message. We will destroy you." 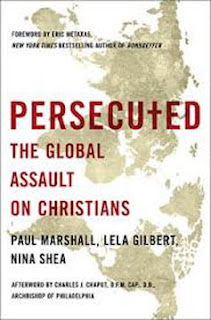 And opposition to our faith is violent and persistent in Mother Russia, as this story demonstrates:  In Russia, police with automatic weapons and attack dogs stormed St. George's Lutheran Church during Sunday morning worship. Blocking all exits, they announced that they were searching for "extremist literature" and proceeded to ransack Bibles and hymnals. Justifying the raid, the police commander said, "There were indications that terrorists were gathering there, and distributing terrorist literature." In fact, the raid was part of a growing program of hostility toward the Lutheran congregation that has been oddly branded "a Catholic sect."
These are just two of the stories as told by authors Paul Marshall, Lela Gilbert, and Nina Shea in their book.  They write, "[Christianity in America] doesn't require us to keep looking over our shoulders, unsure if we will be arrested for praying or be attacked for having a Bible."  Unfortunately, the majority of the world's 2.2 billion Christians DO look over their shoulders.  They have to.
The authors point out that the sources of persecution are threefold: Communist and post-Communist regimes that still "hunger for total political control"; Hindu and Buddhist nationalists who see Christianity as a political as well as a religious threat; and radical Islam with its "urge for religious dominance."  The book goes on to illustrate that, across the world, Christians are harassed, arrested, jailed, tortured, raped, beaten, and killed. Their churches and homes are bombed or burned to the ground. And children are taken from their Christian parents lest they too become tainted with faith in Jesus.
Eric Metaxas, who wrote the best-selling book Bonhoeffer (the story of German Pastor Dietrich Bonhoeffer, who fought Hitler's extermination of the Jews and paid with his life), wrote this in the forward to Persecuted, "we [in America] have been blessed with such a bounty of religious freedom that we can hardly imagine what such suffering must be like." But imagine it or not, we ignore it at our own peril.
The book is hard to read.  The suffering is there on every page.   But as Christians, we are not to turn away from the truth or hope to escape the trials and tribulations of declaring our faith in Jesus Christ.  For that reason alone, you will find that the book will strengthen your faith. The lives of those who witness to the truth of Christianity in the midst of unspeakable pressure are inspirational.
Another reason I recommend the book: you'll understand the world better.  Metaxas cuts right to the point in his assessment:  "This blood-spattered world is the world Jesus came to save and for which we need to pray." Finally, it will prepare us to act.  Metaxas is forceful when he says, "As Christians in America, we're in a position to put pressure on our government and in so doing come to the aid of our suffering brothers and sisters-and we must."  He is right.  But I want to go one step further.... it will prepare us to act in the sense that we must shore up our faith; our comfortable, easy, casual American faith.  Because I'm not sure how most American Christians would respond to the kind of attacks and persecution that others around the world have faced.  It's time to get grounded and strengthen the very foundations of our faith.
As Philadelphia Archbishop Charles Chaput writes in the book's Afterword, "Ignorance of the world is a luxury we cannot afford. We must know our faith, know our world and its struggles; and then open our hearts, engage our minds, and lift our hands."  I would add .... and prepare our hearts and minds to understand that word that is so foreign to our souls .... Persecution.

2 Timothy 3:12     "Yes, and all who desire to live godly in Christ Jesus will suffer persecution."