An article by Sarah Kliff of The Washington Post made my heart sink.  And according to doctors, we can blame it on the Sequester.  Here's how it all plays out:  It was supposedly the Legislators intent to partially shield Medicare from the automatic budget cuts triggered by the Sequester, limiting the program to a 2 percent reduction — a fraction of the cuts seen by other federal programs.
But oncologists say the cut is unexpectedly damaging for cancer patients because of the way those treatments are covered.  Medications for seniors are usually covered under the optional Medicare Part D, which includes private insurance. But because cancer drugs must be administered by a physician, they are among a handful of pharmaceuticals paid for by Part B, which covers doctor visits and is subject to the sequester cut.
The federal government typically pays community oncologists for the average sales price of a chemotherapy drug, plus 6 percent to cover the cost of storing and administering the medication.  Since oncologists cannot change the drug prices, they argue that the entire 2 percent cut will have to come out of that 6 percent overhead, resulting in a cost of 1/3 of their profit!
One Director of an Oncology clinic said, "“If you get cut on the service side, you can either absorb it or make do with fewer nurses.  This is a drug that we’re purchasing. The costs don’t change and you can’t do without it. There isn’t any wiggle room."  Another said, "If we treated the patients receiving the most expensive drugs, we’d be out of business in six months to a year." 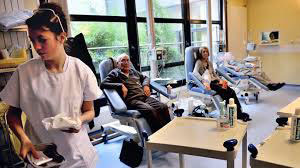 That's why many Cancer Clinics across the country are making the heart-breaking decision to turn away their Medicare patients that need life-saving chemotherapy.  That means that patients at these clinics would need to seek treatment elsewhere, such as at hospitals that might not have the capacity to accommodate them.
Jeff Vacirca, chief executive of North Shore Hematology Oncology Associates in New York made this chilling statement:  “The drugs we’re going to lose money on we’re not going to administer right now.”  After an emergency meeting Tuesday, Vacirca’s clinics decided that they would no longer see one-third of their 16,000 Medicare patients.  That's over 5,000 Seniors that will be told they will no longer be seen by their physicians who have cared for them through one of the most frightening experiences of their lives!  They are not faceless statistics that the Federal Government can ignore .... they are real people, and they are hurting!
And even if they are able to find an alternative medical center to administer the life-saving chemo drugs, experts predict the cost of the care will be considerably higher.  In fact, a study from actuarial firm Milliman found that chemotherapy delivered in a hospital setting costs the federal government an average of $6,500 more annually than care delivered in a community clinic.  And guess who those extra costs will be passed on to?  Milliman found that the portion Medicare patients are responsible for adds up to an additional $650 out-of-pocket expense each time they are seen in a hospital setting.  Who can afford that?
Not surprisingly, non-profit hospitals that treat low-income or uninsured patients receive a double-digit discount from pharmaceutical companies under a federal program known as 340B.  Not really that surprised, are you?
The medical profession is lobbying the Feds, hoping they will see the light and keep this travesty from happening.  Because the numbers just don't lie.  Clinics report that between 50 and 70 percent of the drugs they administer would become money losers.  And when Oncology clinics estimate that 55 percent of their patients are elderly and covered by Medicare, the handwriting is on the wall.  The numbers simply don't add up, and no one can stay in business if they can't cover their costs.
That leaves the elderly to pay the price, both monetarily and physically.  The sad thing is, I'm not too sure this isn't just another manifestation of the "death panel" policy.  Call me cynical!