I know this is going to sound completely off the wall and undeserving of consideration, but please give me a chance to explain.  When the stresses of this crazy world and the unfolding of evil events seems ready to overwhelm me, I take a break, turn on the TV and enter into 30 minutes of pure, simple, godly entertainment.  Judge me if you must, but how am I able to give my mind a break and nourish my soul?  It's simple, really ..... it's called Duck Dynasty! 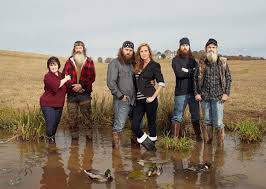 Yep!  The redneck millionaire family from the woods of Louisiana have totally charmed me.  They represent the rags-to-riches American story.  The show's promo calls them the "close-knit family who has made a fortune on duck calls by turning a backyard business into a multi-million dollar sporting empire."  But they are so much more!
The premise of the show is that we tune in each week to watch the antics of a Louisiana bayou family living the American dream as they operate a thriving duck call and decoy business while staying true to their family values.  But here's the real attraction .... For the Robertsons, those values relate to the grace and salvation found in Jesus Christ.  And that has put them right up against the unholy boardrooms of Hollywood.
It seems that it is the Robertsons vs. the Editing Room.  “They pretty much cut out most of the spiritual things,” says Phil Robertson, the Patriarch and one-time honky-tonk operator who gave up his heathen lifestyle in the 1970s, “We say them, but they just don’t run them on the show.  Hollywood has run upon the kingdom of God, and there’s a rub there,” said the Duck Commander.  Phil is a tenacious personal evangelist who has baptized hundreds of souls to new life in the Ouachita River. “Well, we have to be as harmless as a dove and as shrewd as a snake in the way we deal with them.”
Despite the spiritual material cut out of the show, the Matriarch, Miss Kay, says “We’re so blessed for what we can get in there. That’s really unknown in today’s TV on a regular, big TV network like that.”
And this family is serious about their faith.  By taking advantage of an opportunity to be “salt and light” in the entertainment media, the Robertsons gain a voice and a presence in a culture-shaping industry.  And in so doing, they have learned to compromise; the opportunity to influence a segment of culture in very broad ways as TV personalities outweighs the disappointment they may feel when the producers cut out ‘in Jesus’ name’ at the end of every televised prayer.  In a recent comment before his church, Jase Robertson said, "“It’s a slippery slope when you’re holding Hollywood’s hand and you’re trying to accomplish something; when deep down all you want to do is proclaim that Jesus is Lord.”  Yet, somehow they manage to get their message past the program executives, and let us see who they really are.
Maybe it's their irreverence for the trappings of this world; or their obvious love of family and the affectionate teasing that can't quite disguise their sincere attachment to each other.  Maybe it's that the grandkids are respectful of their elders.  It's refreshing to see "yes, sir" and "no, ma'am" roll effortlessly off their tongues. And it's nice to see a family that prospered through hard work and isn't afraid to take pride in their efforts.  I love the old-fashioned, down home values and the humor is honest, clean and really funny. 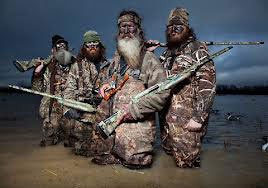 Camo, guns and simple living are the norm for every show.  There is nowhere the men of the Robertson clan would rather be than in full-blown camo, face paint on, and seeing the sun rise from a duck blind. They're proud to be rednecks!
What's more, they have no desire to become enmeshed in the empty standards of today's culture.  In fact, PLW's favorite aspect of the show is when Grandpa Phil teaches the grandkids the old ways; he's not afraid to take away the cell phones and video games and give them a taste of hard physical labor.  Other times he shows them the joys of a lazy afternoon in his pirogue; fishing out of the small, flat-bottomed boat typically used by Cajuns of the Louisiana marsh shows his grandkids that they don't need the distractions of modern society.  He instructs them that fresh air and the outdoors are still good for what ails ya.  The grandkids always receive a thinly-disguised lesson on how to live a godly life.
I love the respect and commitment on display; not only between the Patriarch Phil and his devoted wife, Miss Kay, but between the siblings and their wives.  Every show involves an admonition to the third generation; the grandkids see the value of choosing your spouse wisely.  Then there's Miss Kay's famous cooking.  It is the honey that keeps the family buzzing around her kitchen.  And every single show ends with the extended family gathered around a long table and a mound of home-cooked Southern food, while Phil thanks God for their blessings.
This show makes me feel good; just like The Waltons and Little House on the Prairie used to ---- except that I always end up clutching my sides in laughter.  And there is nothing like laughter to erase the frown lines brought on by the day's headlines.  So I know there will be those of you who will only see the long beards, scraggly hair and endless displays of camo.  But please don't dismiss the Robertson family so quickly!  I know I resisted it for far too long, and am busy catching up on the previous seasons.  In fact, PLW and I end each day with a 30-minute episode and they always leave us smiling and praising their faith in family and God.  What better way to cope with all the negativity in the world!

Psalm 126:2      Then our mouth was filled with laughter, and our tongue with shouts of joy; then they said among the nations, “The Lord has done great things for them.”