Let me tell you about my new friend, Tina.  We met at a firearms training class, in which I was serving as an extra pair of eyes for the instructor.  "Watch for fingers on triggers, and instances of 'flagging' ".  PLW and I had agreed to offer our help that day because the instructors who had trained us were expecting an extremely large class of first-time shooters, and could use the extra support.
It was quickly established that about nine attendees were beyond Beginner Status; they actually had held a pistol and fired one before, so this group was separated from the inexperienced, and that's where I found myself.  PLW would be working with the larger Newbie Class.
As chance would have it (more on that later), I wasn't real comfortable as to how much to insert myself into the class, so I positioned myself behind this thirty-something woman and a gentleman on one end of the class.  I could easily keep tabs on the two of them.  I introduced myself and was instantly drawn to Tina's gentle spirit and smile.  But it didn't take long to figure out that it would take all my attention to see her through this class.
To begin with, she had stacked the deck against herself.  As so often happens, women will show up at these classes with a pistol that their husband, father or boyfriend shoved into their hands as they walked out the door.  Tina showed up with a Smith & Wesson early model semi-auto (in 9mm) with a safety and de-cocker.  I think some male co-worker loaned it to her.  On top of that warning sign, she had no real experience beyond firing her ex-husband's deer rifle.  I'm not exactly sure how she ended up in the Level 1 Class, because she rightfully belonged in the Beginner's.  Her lack of experience with the gun was readily apparent, and all the extra steps she had to take to fire her pistol gave her a significant handicap. 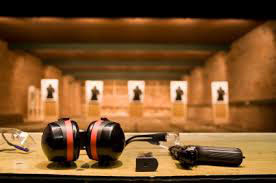 Plus all her gear was wrong.  She didn't have a proper rigger belt for her holster, only one magazine, and no mag holder.  She also had the gel earplugs which were attached to a cord that hung around her neck.  She had to pull them out to hear the instructor, and then re-insert them to shoot.  So she was always seconds behind everyone else, and missed the first sentence of commands every time.  Needless to say the morning was very frustrating for her.  Besides trying to learn proper stance, grip and line of sight, she had to deal with applying the safety each time and de-cocking the gun before reinserting it into her holster.  But she never complained.  I caught the subtle look from the instructor ..... "Stay with her.  She needs extra help."
I was impressed with her marksmanship, but could tell that she wasn't retaining any of the procedures.  For instance, it's a little hard to practice tactical reloads, or Type 1 stoppages when you only have one magazine and no mag holder.  As we took a break for lunch, I could tell that she felt lost.  At that time, one of the guys in the class offered her an extra Glock 19, a holster and mag holder, if she would like to try it.  She looked at me, and I said, "This afternoon will be much more beneficial if you use this set-up.  Try it and see how you like it."
I also took the opportunity to ask some questions.  "Do you mind telling me why you wanted to take this class?"  Another woman had boldly stated that she wasn't interested in doing any tactical training and probably wouldn't pursue the next level of instruction.  I wanted to see what Tina's motives were.
"I am a single mom, and I spend a lot of time on the road with my girls and I want to be able to protect us."  She said it with such emotion, that I found myself blurting out, "Umm, if you think you would be interested, PLW and I would be willing to work with you privately and spend a Saturday or two getting you up to par so that you could take some further classes ..... that's if you want to."  I saw the biggest sigh of relief and then the smile.  "Would you really?"  And while I was still finishing my PB&J sandwich, she had run to her car and written her email address on the back of a Walmart receipt. I guess that would be a "Yes", I thought.  "Hope PLW doesn't mind that I volunteered us."
Well, the rest of the afternoon was as if she had a renewed purpose.  The Glock 19 solved all the issues she had with the Smith & Wesson, and we could concentrate on her stance, draw and grip; all the foundational aspects of her gun-handling.  At the end of the class, our small group rejoined the larger Beginner class and I introduced her to PLW.  I promised to email her when we had a free weekend and wondered if she was really serious, or if there would be a series of excuses. 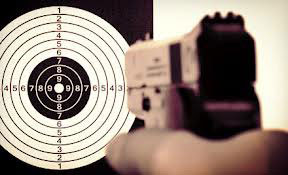 It was a few weeks later when I emailed Tina and I could almost feel that she had been sitting at her computer waiting for my invitation.  She came the next Saturday and we were able to equip her with the proper gun to train with, and all the correct gear.  She had progressed to a pair of inexpensive electronic ear muffs, so I knew she was serious about getting on the right track.  And lo and behold, she was a natural!  She wanted to learn, took instruction well, and fell in love with the training.  She couldn't wait to purchase her own firearm.  But like so many, she was late to the party and the availability of Glocks was scarce.  She also had the added burden of being a single mom, so there wasn't a lot of extra money for such purchases.  We outlined what all she would need to purchase, and she proudly exclaimed, "I know how I'm going to spend my tax return!"
She has made good on her intentions.  She has managed to get her firearm, gear and even signed up and passed her Concealed Handgun class.  She is currently signed up for a Handgun Level 1 class, with plans to proceed to Level 2.  To say that she feels empowered would not be worthy of her state of mind.  She is stronger in her outlook; she possesses more confidence; and feels in control of her life.  She knows the seriousness of firearms ownership and the responsibility of having a gun in her home with young daughters.  She has enabled herself to protect her family and is free of debilitating fear.  She knows that she must never take her skills for granted and must keep practicing and training.  I am extremely proud of her!
But above all else, her story is one that shows what a woman who will take control of her own self-defense and protection can accomplish.  She showed up at a class, totally unprepared and unskilled.  Yet, she stuck it out; she didn't let the frustrations discourage her.  She was willing to take advantage of help when it was offered; and then set a goal for herself and is reaching for higher levels of competence.
And as for our "chance" encounter .... I have no doubt that God's hand is in the mix somehow.  We let her know that we believe it was no accident that our paths crossed and that we were able to help her. She repeatedly thanked us, but we reminded her that it wasn't us she should give credit to.  She had just been blessed by God and He deserved the glory.  Now you might not think that guns and God are a good mix, but I'm here to tell you that He will use any situation to show Himself and to give us opportunities to serve each other.  Tina is on her way to securing the safety of herself and her daughters, and I have a new friend.  It was a win-win for everybody!

Proverbs 19:20-21     Listen to counsel and receive instruction,
That you may be wise in your latter days. There are many plans in a man’s heart, Nevertheless the Lord’s counsel—that will stand.