Sacrificing Our Children At The Altar of Madness

The Reuters news agency released a startling report a couple of days ago that "a Presidential ethics panel has opened the door to testing an anthrax vaccine on children as young as infants."  After the obvious backlash from .... oh, let's just say, anyone who is ..... SANE!, the official Commission who proposed this ridiculous experiment is attempting to back off. 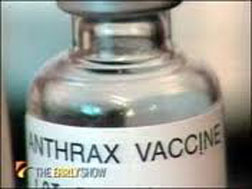 That would be the Presidential Commission for the Study of Bioethical Issues, who, while claiming they would have to overcome "numerous hurdles", has nonetheless sent the proposal to Secretary of Health and Human Services Kathleen Sebelius, who will ultimately decide whether to take the steps the commission recommended.  Whew!  That gives me some sense of relief that reason will prevail!  How about you?
This is the same Kathleen Sebelius who has been endorsed by Planned Parenthood; received major campaign contributions from notorious (and deceased) abortion doctor George Tiller; and who, as Governor of Kansas, vetoed a bill that would have strengthened that state's late-term abortion laws.  So forgive me, if I don't exactly have a lot of confidence that she will make the proper moral decision.
Back to the anthrax experiments on our children.  It's kind of hard to follow the path to how we ended up at this monstrous notion.  Apparently, this ethics commission took up the issue after the National Biodefense Science Board recommended the testing in 2011.  Just who is this Science Board?  Well, this federal advisory board [to the HHS] was created in 2006 to make recommendations on a variety of federal disaster preparedness and response issues. The issues include the effectiveness of the National Disaster Medical System and federal management of the research into the medicines, vaccines and equipment needed to protect our populations's health from bioterrorism and pandemic disease.
Here's the caveat: the National Biodefense Science Board required that the study receive a go-ahead from a bioethics panel.  Enter our Presidential ethics panel, mentioned above.  This so-called "ethics panel" stipulated that "Many significant steps would have to be taken" before a pediatric anthrax vaccine trial could be considered; yet it appears that the "seeking of knowledge" trumps the safety of our children.  Ethics panel Chair Amy Gutmann, president of the University of Pennsylvania, was quoted at a news conference as saying, "Balancing the need to protect children against the need to know, for instance, the safe dose of the vaccine, made this 'one of the most difficult ethical reviews a bioethics board has ever conducted' ".
Not difficult enough, it would seem.  Vera Sharav, founder of the Alliance for Human Research Protection, predicted that such a study would cause "moral harm for us as a nation and suffering for the children. They should have said, 'thou shalt not.'"  Absolutely! 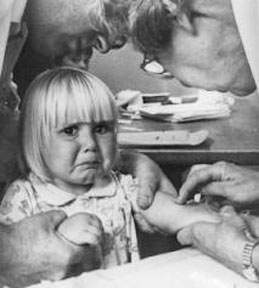 What kind of ethics panel could even consider subjecting infants to the effects of anthrax vaccines?  It is not only immoral, but repugnant!  Yet while the presidential bioethics panel conceded that "there is no prospect of direct benefit to children" who participate in an anthrax-vaccine study, they are still willing to subject the children to a vaccine in which the side effects in children are unknown.  Who do they think they are?  Dr. Frankenstein?
Because of the outcry over testing on infants, one suggestion has been to begin the study on 18-year-olds.  "You'd work your way down from 18-year-olds," said Dr. John Parker, a retired army major general and chairman of the biodefense board. "If it were safe you'd go to 17-year-olds, then 16-year olds." After each round showing minimal harm, "you'd ask permission to move on to younger children."
The youngest age for testing is not clear, said Parker, "but the immune system of very young children is different from older people's."  Results in 16-year-olds or even 5-year-olds might not reveal whether the vaccine is safe in babies, who would therefore have to be studied, too.
Jeanne Guillemin, author of a 2011 book about anthrax attacks, titled "American Anthrax," says that  data collected by the U.S. Army on the side-effects experienced by soldiers, should be enough to dismiss any such studies on children --- of any age.  In the largest study of the anthrax vaccine, the U.S. Centers for Disease Control and Prevention reported in 2008 that in 1,563 adults who received the vaccine, there were 229 "serious adverse events" such as cardiovascular disease, intracranial aneurysm and seizure, though only nine were blamed on the vaccine. Much more common were milder reactions such as soreness near the injection site, itching, fever and malaise.
That's all I need to hear!  From my understanding, most forms of the anthrax disease are lethal.  So why in the name of Almighty God, would a supposedly humane ethics panel even consider the risks of any such tests on children?  But I think I've answered my own question.  There is nothing humane or ethical about a board of government bureaucrats who could suggest such a proposal.  And I don't care if a majority of the board are doctors!  Many of them are part of the Atheistic Elite who see us plebes as fodder for their scientific egos.
As a closing comment, I thought you would find this fact interesting:  Under a 2005 law, children in an anthrax-vaccine study would be prohibited from seeking damages through the legal system.  Does that really surprise you?  But out of the goodness of her heart, the Ethics panel Chair, Amy Gutmann "strongly recommended that a plan be put in place to compensate any children" who are harmed.  Kind of sounds like they are expecting some sort of negative outcome, doesn't it?  All I can say is, Hide your children!

Proverbs 8:13    The fear of the Lord is to hate evil; Pride and arrogance and the evil way; And the perverse mouth I hate.