Seventy-five years ago today, on March 12, 1938, Nazi Germany officially "took possession of" Austria.  For several years prior, Austrian leaders had played a song-and-dance with the Chancellor of Germany, Adolph Hitler, hoping to avoid annexation and trying to maintain their independence.  But their economic woes rendered a compliant populace, who in response to a call for a public vote, overwhelmingly voted in favor of a union with Germany.  It didn't hurt that the Chief Propagandist of the Third Reich, Josef Goebbels issued false press reports that riots had broken out in Austria and that large parts of the Austrian population were calling for German troops to restore order.  It seems that manipulating the news in order to achieve political goals is not a new tactic.  See how easily martial law can be sold to the public? 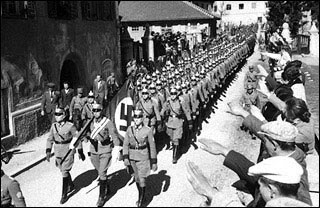 So it was on this date in history that Germany announced the "Anschluss" (Union) with Austria, and German forces crossed the border to a cheering Austrian population.  Although most Austrians will deny it, nearly 200,000 people welcomed Hitler's troops as they marched into Austria.  It didn't take long for Hitler's underlying motive to become apparent.  Some 76,000 people were arrested in the days following the "Anschluss," and a first convoy carrying 151 Nazi opponents set off for the Dachau concentration camp near Munich on April 1 --- less than a month after the peaceful takeover.  And that was just the beginning.
The result of this malevolent union would be some 65,000 Austrian Jews who would be assassinated under the Third Reich; and 130,000 who would be forced into exile.  There would also be 50,000 Jews deported from Austria to ghettos and extermination camps.  Only 1,747 of them would return to Austria at the end of the war. (Figures from the Holocaust Education & Archive Research Team).
It is for these very human reasons that I was shocked to read the results of an opinion poll taken by an Austrian newspaper.  TheBlaze.com reports that when Austrian citizens were asked about their opinion of Adolf Hitler and the Nazi annexation during World War II, an astonishing 42% said "life was not all bad under Hitler", while 61% said they would be interested in "a strong-armed leader who did not have to deal with democratic challenges like political opponents and elections."
This should be alarming to the entire world!  Austria was the beginning of Hitler's dream of an empire, and the cleansing of the Jewish population was maniacal and violent.  The flames of anti-semitism were fanned in Austria and would spread throughout the Third Reich and beyond.  The embers of that old hatred are still burning, and 54% of today's Austrians said they believed neo-Nazi groups would succeed in Austrian elections this September if they were not banned there!
So, I ask, do they not remember their history? Or like ours, has it been distorted and re-invented through the last few decades so as to render it a believable deception?  The city of Vienna held the largest concentration of Jews during the War years, and there is still a viable population in that city today.  But when the head of Vienna’s Jewish community says he has seen a doubling of the number of anti-Semitic incidents in the last year, then it's time to revisit history and gain some perspective.
Austria was where the Nazi's began and perfected their plan of extermination for the Jews.  It began simply enough with Jews being barred from becoming real estate agents, traveling salesmen, and accountants.  Soon they were forbidden to enter the stock exchange, and then they weren't allowed to go to their safety deposit vaults without police escort.  Landlords were asked to expel Jewish tenants, and it was established that Jews could not live in flats with windows facing main streets.
All Jews with property of more than 5000 marks had to declare it, even if it were held abroad, and Jewish children were not allowed to go to state schools or universities.  Aryan servants were not permitted to work in Jewish households; and Jewish doctors could no longer practice, even though 47% of all doctors in Vienna were Jewish.  Jewish scholars also report that 62% of all lawyers and 29% of all University professors were Jewish.
And that's how it starts.  You marginalize a segment of the population and begin to undermine their contributions.  You spread lies and make them the enemy; you make them responsible for your economic troubles and blame them for your insufficiencies.  Most important of all, you diminish them as human beings and isolate them from society.  Hitler did all this; he saw the relative success of Jewish financiers and bankers while the rest of Germany suffered the financial ills of the country's loss in WWI.  His bigotry became hatred, which made it easy to demonize the Jews.  His nationalistic fervor excluded the Jews as an inferior race, and his promises to restore Germany to its rightful place in the world set the stage for his meteoric rise to power.
Apparently nothing has changed.  Nearly two-thirds of the Austrian's who were polled would like to see a "strong-armed leader" take control again.  The world would be wise to pay attention to these rumblings.  I would think that the horror of what began 75 years ago today would be enough to stem the tide of such oppressive talk.  It is apparent that anti-Semitism is on the rise; and in the very countries where the atrocities were committed.  Hitler came to power because the people turned to a godlike figure to heal the nation's misery and hardships.  And, as happens throughout history, these men become deluded by their power and influence.  There is no room for compromise or cooperation.  They have the control, and Evil quickly steps in to manage their authority.
Hitler was just another manifestation of the Evil that seeks to separate man from God.  He was a willing host.  That same Evil is on the search again, stirring up old prejudices and intolerances.  The Jews are once again in his sights, and whether it is the alarming opinion poll in Austria, or the blatant attacks by Hezbollah and Iran, we need to pray that our Almighty God, who is on His throne, will not let the world go down this road towards Holocaust again.
Seventy-five years ago today, the world took its first step into diabolical darkness.  Pray that our walk this time will be in love and mercy, and we will remain in the Light.