What Sequestration Will Mean For Our National Defense

It's time to have a serious discussion about Sequestration.  First of all, we need to be on the same page as to exactly what this term means.  MoneyWatch gives the simplest explanation I have heard:  Sequestration is the fiscal policy procedure adopted by Congress to deal with the federal budget deficit; an "automatic" form of spending cutback.
And here is how it came about:  The Budget Control Act of 2011 (BCA) established a 12 member Joint Select Committee on Deficit Reduction  (or “super committee”)  charged with reducing the deficit by an additional $1.2 - $1.5 trillion over ten years. The BCA also included a sequestration hammer should the super committee fail, a provision intended to “force” the super committee to act.
Guess what?  They failed.  So, as mandated in the BCA, sequestration was triggered when the super committee failed to reach an agreement. Sequestration generates automatic cuts for each of nine years, 2013-2021, totaling $1.2 trillion. Sequestration was originally scheduled to take effect on Jan. 2, 2013. However, it was delayed for two months - until March 1, 2013, by the deal struck on New Year's Eve, called the American Taxpayer Relief Act of 2012.
Since Congress failed to act to stop sequestration, we are looking at the first round of cuts to take place on March 1st.  You might think automatic spending cuts are the way to go if Congress can't do their job and reduce the deficit.  If that's what it takes..... 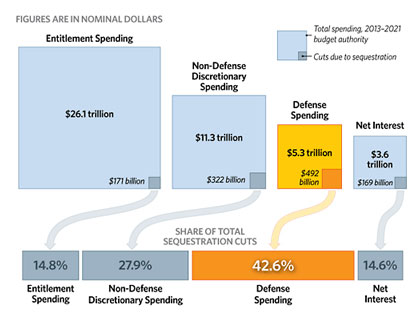 But here is the downside: the 2013 cuts apply to “discretionary” spending and are divided between reductions to defense ($500 billion) and non-defense ($700 billion).  Now you might not immediately see the ramifications of this split, but let me put it to you in simple-to-understand language .... nearly half of the budget cuts are at the expense of the military.  And not only will these spending cuts cripple the proficiency of our military; but with the socio-political state of the world, can we afford the effects of such a reduction to our defense capabilities?
Consider this.  There are many factors of our military preparedness and readiness that will be affected by these drastic cuts.  Think about Military Intelligence.  It is part of the Defense budget scheduled for cuts.  With the troops that we still have stationed in Afghanistan and Iraq, along with Benghazi-style attacks, Intelligence is important in keeping our troops safe and effective.  On top of that, deployments may be extended, adding an even heavier burden to our exhausted troops. 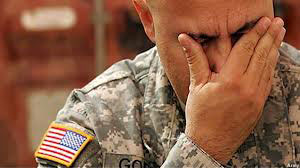 With the impending budget cuts in view, Defense contractors have begun layoffs, which can only mean that our troops will pay the price with a lack of equipment and supplies.  The U.S. Navy has announced plans to reduce the number of ships in its fleet from 285 to 235 over the next 10 years.  Don't you think that is welcome news to our enemies and a source of consternation to our allies?
I don't see how anyone can refuse to see that the world is becoming increasingly dangerous.  We see  chaos and war throughout the Middle East; Syria and Egypt are on fire; and Jordan, Libya, Yemen and Turkey are smoldering.  We have nuclear threats from Iran and North Korea, Russia rattling their sabres, and Africa becoming the new radical Islamic playground.  And let's not forget China and the threat it imposes! So why in the hell are we talking about disarming our nuclear arsenal and dismantling our fighting force?
A Heritage Foundation blog pointed out this interesting fact:  "When President Eisenhower coined the phrase, “the military-industrial complex” in 1961, 51 cents of every dollar spent by the federal government was spent on defense, while 37 cents of every dollar spent by the federal government was spent on domestic programs. Today, less than 20 cents of every dollar spent by the federal government is spent on defense, while more than 70 cents of every dollar spent by the federal government is spent on domestic programs."
I will agree that we need to strike a balance between defense and domestic spending.  A bloated military-industrial complex is not good for the country either, because that monster has to be fed.  And unnecessary wars and the loss of our best and brightest are not worth the cost.  But these figures now reveal that 3.5 times of the Federal Budget is spent on entitlement programs and "Departments", rather than on strengthening and maintaining the defense of this country.   Now tell me, just what have Food Stamps, Medicaid, Medicare, and the Departments of Education, Energy, Agriculture and Labor done to secure our freedoms?  Have any one of these "distribution" programs or swollen bureaucratic systems contributed to the protection or security of your family?
Our national security is at risk!  While we disembowel the finest military on the face of the earth, our enemies grow in strength, capability and courage.  Why would they not see us as weak and potentially defenseless?  We are gambling with our future!  Sequestration sets us on the road towards destruction; and who, in DC, will stand for our brave troops, safeguard our homeland, and defend the stature and respect of the United States?  This is a disgrace!

Psalm 89:42-44     "You have exalted the right hand of his foes; you have made all his enemies rejoice.  Indeed, you have turned back the edge of his sword and have not supported him in battle.  You have put an end to his splendor and cast his throne to the ground. "