A Tale Of Two Fathers

This past week, I'm sure you heard the news stories about the fathers who were confronted with someone breaking into their homes, and threatening their families.  Both fathers took action to protect their children; both stories ended in dramatically different fashions.
In Miami, Florida, 36-year-old Maurice Harris fought with two heavily-armed men after they broke into his home and held he and his wife at gunpoint.  It was when one of them approached the bedroom of his sleeping 11-year-old daughter that this brave man decided to make his move.  He allegedly charged the suspect; they fought; then he was shot and killed. 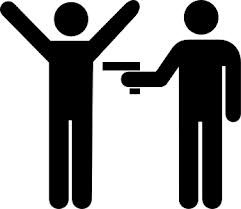 The outcome was different 6oo miles to the north, in Prince Edward, Virginia.  When three men busted down the door to a modest rural home, they were met with gunfire, as the homeowner and father protected his two-year-old son.  Two of the suspected armed robbers were killed, while the third managed to escape.  The father and his child were unharmed.
Both instances make the hair on the back of my neck stand up.  I think this is every homeowner's worst nightmare.  You are awakened in the middle of the night by the sound of someone breaking down your door, and in a matter of seconds, your family is in danger.  If the criminals are armed, you are at their mercy.  How do you expect to protect your family?
Those who, like the Police Chief of Emeryville, California, think that "a gun is not a defensive weapon", should take a few moments and think about the consequences of the above-related stories.  The father who legally owned a firearm was able to defend his family.  The father who tried to fight armed criminals without the aid of a gun lost his life.  Which makes more sense?
And let's not forget the Georgia mother of a few weeks ago who successfully defended herself and her two children from an armed criminal who stalked them in their own home to an upstairs attic.  Does anyone really think that the outcome would have been the same if she had not had a weapon?
To say that a gun has no value as a method of defending yourself is like saying an automobile is nothing but a killing machine because of the number of traffic fatalities.  All inanimate objects can be used for good or evil, depending on the motives of the operator.  But to assume that guns are only an "offensive" weapon, meant to intimidate people and to be used for a show of power seems clearly one-sided; spoken from the Police Chief's perspective.  Yes, a gun in the hand of a police officer can be offensive when trying to curb crime.  But I bet if you asked a cop who saved his own life, or that of a fellow officer by firing back at armed criminals, he would say he was "defending" himself.
The whole gun debate has become so politically driven, that we've seemed to have lost all common sense when it comes to the issue.  Having vilified the weapon, instead of the person using the weapon, our society is ready to condemn this effective tool for self-defense.  So just how would "they" suggest we protect ourselves in this increasingly violent culture? 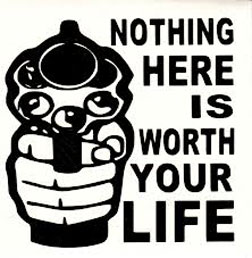 Are we to assume that the hundreds of gun laws on the books are going to convince all the bad guys to just lay down their weapons?  We know they're not going to register them or turn them in, since many of them were gained illegally.  Do you really think they are suddenly going to be willing to do the "moral and just" thing?  And if the anti-gun proponents are willing to let those guns stay in circulation, while expecting law-abiding citizens to turn theirs in, then how do they propose we stay safe and defend ourselves?
Perhaps the Police Chief of Emeryville should have a sit-down with Milwaukee County Police Chief David Clarke, who recently stated in a radio ad, "With officers laid off and furloughed, simply calling 911 and waiting is no longer your best option... You could beg for mercy from a violent criminal, hide under the bed, or you can fight back."  Clarke then urged listeners to take a firearm safety course and handle a firearm "so you can defend yourself until we get there."
The police chief doesn't buy into the politically correct mantra of the anti-gun supporters. "You have a duty to protect yourself and your family."  He ended his radio ad with, "We're partners now. Can I count on you?"
Now here is a law enforcement officer who deals in reality!  We are at the mercy of violent criminals.  What reasonable person wants to abdicate the safety of themselves or their family to another person?  Do you really want to rely on 911 and the response time of law enforcement?
The decision to own a firearm and get responsible training is very personal.  It is unfortunate that our society has deteriorated to the point that it needs to be considered for personal protection.  But to deny that fact is to live in delusion.  It must also be stated that owning a firearm for personal defense is not a license for citizens to take the place of law enforcement; but it is a viable tool to protect yourself and your family until law enforcement arrives.  Those can be valuable seconds.  And in the lives of these two fathers, it meant the difference between deliverance and devastation.

Luke 11:21    "When the strong man, fully armed, [from his courtyard] guards his own dwelling, his belongings are undisturbed [his property is at peace and is secure]."

Email ThisBlogThis!Share to TwitterShare to FacebookShare to Pinterest
Labels: Firearms and Training, Self-Defense