In Honor Of A Hero 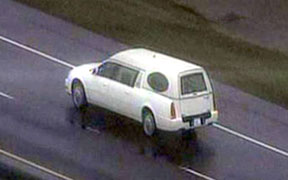 On Monday, family, friends and fellow heroes honored slain Navy Seal Chris Kyle in Cowboy Stadium in Dallas, Texas.  At his funeral, his life was celebrated and recognized by those who loved him best: his wife and children who shared him with his country, and his brothers-in-arms who shared his life of sacrifice for the rest of us.
Yesterday, along a 200-mile stretch from Midlothian, Texas (where Kyle resided) to the Texas State Cemetery in Austin, thousands of "the rest of us" paid their respects to a man who gave it all; and gave it from his heart.  It was raining in Texas yesterday, but that didn't prevent Americans from showing up to let Chris Kyle's family know that they acknowledge and appreciate the sacrifice he (and they) have made. 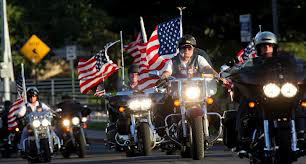 All along I-35, flags were lining the route as military personnel, first responders and the Patriot Guard escorted the procession.  In case you are unaware of who the Patriot Guard is, they are a diverse group of motorcycle riders from across the nation, who volunteer, out of respect, to attend the funerals of fallen American heroes.  They have two objectives:  1) to show respect for the fallen heroes, their families and communities; and 2) to shield the mourning families from interruptions by protesting groups, such as the Westboro Baptist Church.  Yes, they would try to make their disgusting presence known.  But the Kyle family requested the presence of the Patriot Guard and they responded, coming from all over the country. 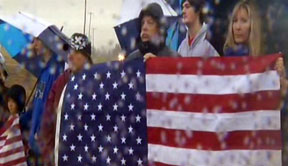 But it was the faces of the men, women and children who lined the route in the cold and the rain that told of America's deep admiration for Chris, and men like him.   It's the only way we know how to say "thank you."  We realize that he is, in so many ways, better than us.  He's willing to stand in the gap for us, to face evil men who wish to kill us, our families, and our way of life.  And in doing so, he is willing to lay down his life for us. Then, when by the grace of God, he is able to lay down his arms and come home to his family, he continues to sacrifice for others.  Once again, he steps into the gap to help fellow soldiers who suffer from the ravages of war that prey on their minds and souls.  He sells his own story of incredible exploits and accomplishments, and devotes all the proceeds to fellow soldiers.  These levels of sacrifice are beyond what is demanded or expected from any of us.  Yet, Chris Kyle did them without fuss or fanfare.  He modeled his Christian faith and put his fellow man first. 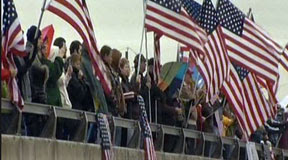 Can you say you would do the same?  I cannot, and I dare say, neither can most of America.  And so they line the highway, expressing their gratitude with a show of our flag; the symbol that Chris Kyle fought for, sacrificed for, and loved so well.  Thank you seems too shallow, and Respect  is not a big enough word for what we want to express.  Perhaps we want to say to Chris, "You will never be forgotten, and your death will not be in vain.  As of this writing, Glenn Beck's Mercury One organization has raised over $600,000 from Americans like me, who have pledged to stand in the gap for you, and take care of your family's needs, as well as continue your efforts to help you help soldiers with PTSD.  It's the least we can do."
After the procession passes, the flags will be stored, and people will return to their lives.  But Chris Kyle will live on in the hearts of those who stood in the driving rain yesterday.  His story will burn in the memory of every child present, and they will know what it means to stand for something and offer their talents and their love of freedom on behalf of others.  Chris Kyle loved his family, his home state of Texas, and America with the full force of his personality.  God has welcomed Chris home, and I pray that his sacrifices will result in unparalleled honor for this man and his God.

Psalm 112:8-10      "Their hearts are secure, they will have no fear; in the end they will look in triumph on their foes. They have freely scattered their gifts to the poor, their righteousness endures forever; their horn will be lifted high in honor."