Syria: What Is The End Game?

It's no secret that I view world events from a Biblical perspective.  You may, or may not agree with me, but I would hope you would consent to the idea that this viewpoint is legitimate and valid.  To that end, I am fascinated with the machinations of world leaders in regard to Syria.  In truth, the circumstances in this war-torn country, that has seen the reported deaths of 60,000 of its citizens, is an on-going event; so it is impossible to sum it up.  But it is nonetheless compelling in its relevance. 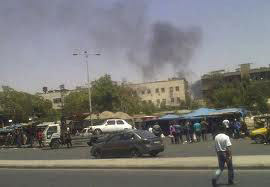 There are so many references to Syria in the Bible.  For instance, Damascus is mentioned 67 times; it was on the road to this historic city that the Apostle Paul was converted.  And what Christian does not know the prophecy of Isaiah 17 that "Damascus will become a ruinous heap"?  So I watch all the maneuverings and the posturing between Russia and the United States and wonder, what will be the outcome of their furtive tactics?
Just this past week, Syrian President Bashar Assad puffed out his chest and proclaimed that his country no longer takes dictation from anyone, and called on Syrian citizens to defend the country against “a war fought by only a handful of Syrians and many foreigners.”  Of course, I'm sure the 16 Russian warships, just off the Syrian coast, and carrying thousands of marines, gave him the confidence to boast that he would “deter the West from deploying ground forces in Syria."  So on the one hand, we see Russia actively getting involved in Syrian affairs.
On the other hand, contradictory statements by U.S. Secretary of State candidate John Kerry leave me wondering just how our nation views our relationship with this troubled country. In March of 2011, Kerry spoke optimistically about the Syrian government and the United States making progress with Assad.  "“President Assad has been very generous with me in terms of the discussions we have had .... So my judgment is Syria will move; Syria will change, as it embraces a legitimate relationship with the United States and the West and economic opportunity that comes with it and the participation that comes with it."  He was quick to add, however, “I take nothing at face value in any relationship.”
That's good, because in August of 2012, Kerry called for President Assad to step aside, in the wake of international outrage over Assad’s "unceasing violence against his people."   These remarks stood in stark contrast to previous Kerry statements.  He further stated, “what is clear is that we need to increase the political and economic pressure so President Assad understands that he must end the violence and embrace reforms.”
To me, the unsophisticated (to put it mildly) political analyst, it would appear that the U.S. and Russia are jockeying for position, and influence, with Syria.  But what is their end goal?  It is hard to believe that the U.S. really thinks Assad wants any kind of relationship with the West; especially when he sees how the U.S. and its allies threw Egyptian President Mubarek to the wolves; whether he deserved it or not.  Why would he trust the West?
And then there is Russia.  What is their agenda?  Russia and Syria have had a long history together; Syria being Russia's strongest Middle Eastern ally.  Russia has been supplying Syria with weapons since the 1950s, and has a vested interest in seeing the relations between the oil-rich Middle East and the United States in turmoil.  At this stage, it would appear that both super powers are backing opposite factions in Syria --- Russia supports Assad and his regime, while the U.S. approves of the so-called "rebel fighters" fighting for "democracy".  (We have yet to receive answers about our alleged involvement in gun-running via Libyan terrorist groups in Benghazi). 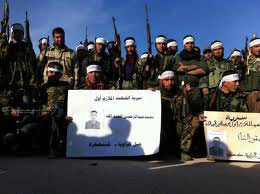 But back to Kerry's statement about "Assad ending the violence," and President Assad's own statement about a"war fought ... by many foreigners."  Just who are these foreigners?  As my recent post, Understanding the Syrian Conflict  explains, many feel that the "rebel forces" fighting Assad are, in reality, Al Qaeda-linked forces, streaming into Syria to claim the country for their cause and align themselves with Iran and other anti-West terrorist groups.
To that argument, I found a most interesting proposition on Debka, the Israeli news source.  In its latest issue of Jan. 4, Debka-Net-Weekly revealed that both Washington and Moscow may be encouraging the rush to Syria of Al Qaeda and other radical Islamist fighters so as to put them in harm’s way on the Syrian battlefield instead of their staying home to make trouble in Asian, European and other Middle East countries.  On this point, Assad remarked: “The West tried to get rid of these terrorists by drawing them into conflicts in Iraq, Afghanistan and other places, but were unsuccessful. Now they are sending them to Syria. "
Wow!  That seems like a crazy idea .... or does it?  There's nothing I wouldn't believe these days.  As if that's not enough to blow your socks off, Assad seems to think that the presence of Russian marines near Syrian waters “will deter the West from deploying ground forces in Syria." The Russian flotilla and marines are intended to be the counterweight to the six NATO Patriot missile interceptors, the US, Germany and Holland have installed on the Turkish-Syrian border. Russia along with Iran  is providing Assad with a strong military shield, which is supplemented by Chinese diplomatic support.
So, are you seeing the picture develop as I am?  Are the nations of the world assembling for an apocalyptic conflict on the plains of Syria?  They certainly seem to be competing for position, as well as power.  But woe to them, for they don't realize that the hand of God is the real Master behind world events.  It may not yet be time for Damascus to become "a ruinous heap", but the clock is surely ticking.

Ezekiel 38:23       "I will magnify Myself, sanctify Myself, and make Myself known in the sight of many nations; and they will know that I am the Lord."