Ready For Some Good News?

After reporting on the depressing comments by a "Christian" writer on Saturday's post, I thought we could all use some uplifting news.  I'm sure you've heard the reports over the last week of the Houston, Texas waiter who refused service to a patron who maligned a young special needs customer dining at the same restaurant. 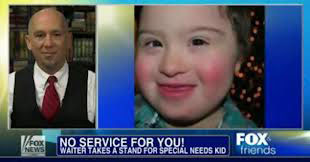 Milo, the five-year old customer at Laurenzo's Prime Rib, was celebrating his recent birthday.  Milo also has Down's Syndrome, and his exuberance was high-spirited and irrepressible.  Apparently, another customer was unable to celebrate or honor Milo's joy, and complained that "special needs children need to be special someplace else."  That's when waiter Michael Garcia did the decent thing.  He told the regular patron that, in good conscience, he would not be able to serve him due to his treatment of young Milo.  Garcia said, "My personal feelings took over. Milo wasn't being bad, he was just talking and making little noises."   Subsequently, the complaining customers left the restaurant and Milo continued with his celebration.  What's more, the restaurant management backed Michael Garcia's actions.  Kudos to them, as well!
It's nice to read about someone who is willing to risk his job and do the right thing.  His compassion for another human being; one that our current culture would see as "less than normal", is an example of the tolerance that is so fiercely proclaimed by the Politically Correct culture, yet very rarely demonstrated.  I don't know whether Mr. Garcia is a Christian or not, but he showed Christ's love for his fellow human being.  And as my post yesterday pointed out, Milo was "fearfully and wonderfully made" in his mother's womb.  He is a treasure to God, who created him, and it is God's Spirit within Michael Garcia that allows him to love Milo for who he is.
As if this inspiring story is not enough, I have another one for you.  In the small town (pop. less than 1500) of Unionville, Tennessee (south of Nashville), three popular nominees for Homecoming King made a decision that touched the heart of our nation.  They made a unanimous decision that no matter who won, they would give the crown to a beloved student with a genetic condition. 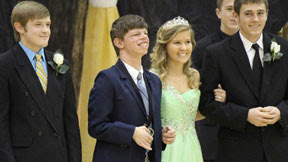 According to the local news affiliate, students Jesse Cooper, Drew Gibbs and Zeke Grissom were all nominated for homecoming king at Community High School's basketball homecoming ceremony.
The teens got together and decided that the winner would turn over the honor to junior Scotty Maloney, who has Williams Syndrome, a neurological disorder that inhibits learning and speech.
"I've been blessed with so many things," Cooper said. "I just wanted Scotty to experience something great in his high school days."  Gibbs said,"He's always happy, so he deserves some recognition for who he is."
Cooper won the popular vote for Homecoming King, but when the Principal announced that a different decision had been reached, that's when it got emotional for everyone present.  Scotty Maloney's  name was announced, and the crowd erupted in cheers, as Scotty experienced a long standing ovation.  As he was awarded his "King" medal, the smile on his face told the rest of the story.  "To know Scotty and meet him is to love him," seems to be the motto of the student body of 500.
And this small community school appears to be another example and model of Christ's love for all of his children.  Students like Jesse Cooper help out in special needs gym classes and other activities.  They interact and support those who are "different" than themselves.  Scotty's Special Needs teacher, Liz Gassaway, said the boys' gesture toward Maloney sent a greater message.  "We want people to have more empathy towards people, not be scared of people with disabilities," she said. "We want them to embrace them, more like the boys did."  For now, Scotty wears his medal everywhere, and it is a symbol of Christ's call to "love your fellow man".  It also is evidence of the verse in Psalm 139 that this special day for Scotty Maloney, and the three young men who honored him was "ordained for them" and "written in God's book before one of them came to be."
And in closing, I wish to point "Christian" writer Frank Schaeffer to these poignant stories.  This is an accurate picture of what white, Christian men are all about.   The One True God is still alive and well in the South, and these men speak His Truth.

Psalm 139: 1-4     "You have searched me, Lord, and you know me.  You know when I sit and when I rise; you perceive my thoughts from afar. You discern my going out and my lying down; you are familiar with all my ways. Before a word is on my tongue you, Lord, know it completely. "