"I Will Keep Them From Harm and Injustice"

The title of today's post is a small part of the Hippocratic Oath, taken by many doctors as they embark upon a career to practice medicine, both ethically and honestly. It is part of the covenant between them and their patients, and doctors take it seriously.  I want to thank CZ; a faithful reader and friend, as well as a physician herself, for referring me to a timely article by Paul Hsieh, MD, who is a physician and co-founder of Freedom and Individual Rights in Medicine (FIRM).
Dr. Hsieh wrote the article for Forbes Magazine's website, and I have to tell you that it gives me great hope that physicians across the land will follow his example.  Dr. Hsieh gives an indepth account of why he will not follow the mandate issued through the White House Executive Orders that purportedly clarifies that “the Affordable Care Act [ObamaCare] does not prohibit doctors asking their patients about guns in their homes."  Before this "clarification", it was understood that ObamaCare banned the federal government from using patient medical records to compile a list of gun owners.  But with the rising hysteria resulting from the CT shootings and the all-out assault by anti-gun lobbyists and politicians, that stance has been modified. 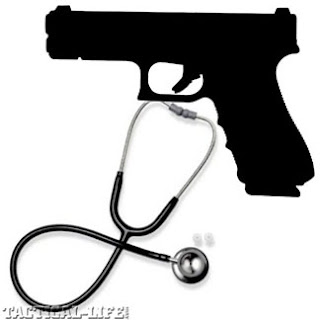 Dr. Hsieh, boldly and courageously, calls out the American Academy of Pediatrics (AAP) for their biased position in promoting and encouraging physicians to follow the latest dictate and ask patients about gun ownership --- all in the name of protecting "the children".  He disavows this recommendation, pointing out that they use the false and misleading scare tactic of “A gun kept in the home is 43 times more likely to kill someone known to the family than to kill someone in self-defense.”  (These statistics do not disclose suicides among the numbers).
Furthermore, if you are serious about protecting the children, he asks why would you not report swimming pools to the federal government, which contribute to drowning, a leading cause of death among young children.  In fact, Dr. Hsieh further bolsters this argument by quoting University of Chicago economics professor Steven Levitt and his co-author Stephen Dubner.  In their best seller Freakonomics, they noted that a child is 100 times more likely to die in a swimming accident than a gun accident.   So following this logic, physicians should definitely be gathering information on swimming pool ownership.  Or what about stairs (death by falls); household products (death by poisoning); cooking with hot grease (burn injuries and fires); all the small toys or objects that can obstruct a child's airway (death by suffocation or strangulation) .... all of these were mentioned by a U.S. News & World Report article as leading cause of accidental death in the home.  Not guns!
What is ironic is that the AAP recognizes the value of a swimming pool in a family's life, and even promotes teaching children how to swim .... even though it is a leading cause of death among those same children.  Why can they not give the same credibility to gun ownership?  A gun in a household, with proper training and safety precautions, could be a valuable asset in the home .... especially in the event of an unwanted intruder.  It could actually SAVE lives!  Now that's a novel concept!
Dr. Hsieh mentions that doctors already have a professional and legal responsibility to notify the authorities if they believe patients pose an imminent threat to others or themselves.  And I believe that doctors take that responsibility seriously.   Mandating that they MUST ask their patients any question about gun ownership is not only violating the patients' constitutional rights and endangering doctor/patient confidentiality, it will erode all trust and confidence in that sacred relationship.
The good doctor recommends that his fellow colleagues follow the doctrine of a fellow friend and physician, Dr. Matthew Bowdish, who declared, “I will not undermine the Second or Fourth Amendment rights of any of my patients who are lawful gun owners. Nor will I record my patients’ gun ownership status in any medical records that could be accessed by government officials unless relevant to a specific medical issue.”
Physicians all across the country are having to decide where they stand on this issue.  I pray that the majority of them will follow the dictates of these ethical and brave doctors.  And might I suggest something from the patient side of the aisle?  It would give me great confidence to see a statement similar to Dr. Bowdish's prominently displayed in my doctor's office.  There would be no need for comment or discussion.  All patients would know where their doctor stood and could be confident that their rights were being secured.  I believe that this issue is important enough, (to both doctor and patient), that such a statement would clear the air and set the boundaries of this very important relationship.  We may not have control over Executive Orders coming out of the White House, but we sure as shootin' (pardon the pun) can take charge of the dialogue with our healthcare partner.  Further regulations and legislation are on the way, so know where your doctor stands.  We need to support each other and our Constitutional rights.

Isaiah 8:10     "Devise your strategy, but it will be thwarted; propose your plan, but it will not stand, for God is with us."