Egypt and Middle East Ramping Up Against Israel

With all the political speak over our domestic Fiscal Cliff and Gun Control legislation, we Americans may not be aware that Egypt's President Morsi and his Muslim Brotherhood cohorts are increasing their rhetoric against Israel.
Morsi has been quoted in the past as referring to Jews as the descendants of apes and pigs and called on Palestinians to employ "all forms of resistance" against the Jewish state, including violence.  "These blood-suckers who attack the Palestinians, these warmongers, the descendants of apes and pigs … there is no place for them on the land of Palestine," Morsi said. 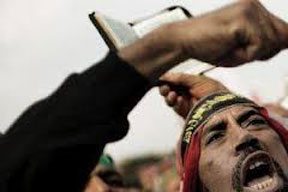 Now the deputy head of Egypt's Freedom and Justice Party (the political arm of the Muslim Brotherhood) has stated that the "ideology of Zionism" had ended in failure and that "Palestine's occupiers" should leave to make way for the return of Palestinians.  This is actually a new form of attack.  Instead of denigrating Jews, themselves, the Brotherhood is now insisting that their real enemy is Zionism.
So that we all understand what is meant by this term, we will use the common definition, as stated in Wikipedia:  Zionism is a form of nationalism of Jews and Jewish culture that supports a Jewish nation state in territory defined as the Land of Israel.  By focusing on the elimination of the state of Israel instead of the Jewish people, the enemies of Israel can appear to channel their hatred in a political sphere, rather than a personal one.  But don't let them fool you!
This criticism of the state of Israel is nothing less than an ill-disguised form of anti-semitism; a suspicion of and hatred towards Jews, for no other reason than their Jewish heritage.  It's as old as time, and recorded throughout the Bible and all of history.  And that is why there has been such a push for Palestinian statehood, both by the U.N. General Assembly and now Palestinian Authority President Mahmoud Abbas, who has ordered his government to officially change the name of the Palestinian Authority to "State of Palestine."  If, somehow, the legitimacy of Israel's statehood can be called into question by declaring "the ideology of Zionism" a failure, and the world can, instead, declare Palestine as the rightful state, then Israel's claim to the Land is fraudulent and unsanctioned.
But they are forgetting one thing:  regardless of what the nations of the world say, or Middle Eastern strongmen, or the United Nations General Assembly; it was God who gave the Land to his chosen people, and declared that they would always possess it.  No earthly government or political leader can over-rule God.  The nation state of Israel exists because God said it would.
We should look for increasing pressure from our own government for Israel to recognize a Palestinian state.  Indeed, even Prime Minister Netanyahu has hinted at just such a possibility.  That would be unwise for all parties concerned.  It's never a good idea to think you know more, or are capable of making better decisions than God.  Why would anyone consider giving away what the hand of God has consecrated?  I see the maneuvering of the Enemy, and I'm wondering how God will outwit him.  Because one thing is for sure .... that land is Holy and God will never allow it to be surrendered.

Genesis 13:14-15    "The Lord said to Abram, after Lot had separated from him, “Now lift up your eyes and look from the place where you are, northward and southward and eastward and westward; for all the land which you see, I will give it to you and to your descendants forever."