For some reason, the thought "you need to understand what is happening in Syria" keeps coming to the forefront of my brain.  I keep pushing it back because I'm not quite sure where to go to get creditable information, or if I'm even capable of comprehending all the players and the true situation on the ground.  But because of my Biblical worldview, I know that this issue is important and Damascus plays a role.  So I have, frankly, spent more time than I wished on this post.  But I feel we need to be aware of how this war-torn country could play a role in our future.
First of all, the news coverage by the MSM and even Fox News has been lame.... minimal information with no clear explanation of who is who and what the relationships are.  All I've been able to discern is pretty much "Assad vs. rebel forces."  So what is the real situation, and who are the rebel forces, and how could it possibly involve us? 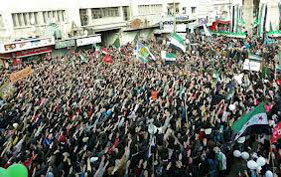 I am no political or foreign policy genius, but this is what I have been able to determine.  The Syrian uprising (which has evolved into an actual civil war at this date) occurred in March of 2011 as a part of the Middle East protest movement known as the Arab Spring.  Protesters demanded the resignation of President Bashar al-Assad, as well as the end to nearly five decades of secular Ba'ath Party rule.  As far as I can understand, the Ba'ath Party was a form of strict, authoritarian rule, similar to the Communist Party, and did not recognize society per se, but saw itself as the society.  In other words, the party and the people are inseparable, which resulted in extreme political control of the masses. Any call for democratic reform was quickly squelched.  Totalitarian rule was the name of the game.
As the Arab Spring spread, and the protests and the uprising in Syria began to swell, the Syrian Army was deployed, and soldiers were ordered to open fire on civilians in demonstrations accused of harbouring armed activists. After months of military sieges, the protests evolved into an armed rebellion. Opposition forces, mainly composed of defected soldiers and civilian volunteers, became increasingly armed and organized as they unified into larger groups, with some groups receiving military aid from several foreign countries.
For months now, we've been hearing about "the rebel forces" fighting the military loyal to Assad, and the news slant seems to be trying to convince us that "the rebels" are the good guys fighting the Assad's evil regime.  While that may be true to an extent, I think there is much more to the story.  Just what is the make-up of these "rebel forces"?  By July of 2011, defected Syrian Armed Forces personnel and civilian volunteers joined together to form the main opposition group to Assad's government, and called themselves the Free Syrian Army (FSA).  This group gained support from Turkey, who allowed this rebel army to operate and locate their headquarters within Turkey's borders.  There was also a coalition of anti-government groups, called the Syrian National Council. This group, based in Turkey, attempted to organize the opposition rebel army.  However, the opposition, including the FSA, remained a fractious collection of political groups, longtime exiles, grass-roots organizers and armed militants, divided along ideological, ethnic or sectarian lines.  Sounds like a recipe for disorganization, infighting, and an opportunity to be exploited by other groups.
Clashes between the Syrian Government and the FSA continued, each side gaining ground and then losing it, as the fighting resulted in tens of thousands of deaths.  UN Secretary General Kofi Annan attempted a ceasefire, but by the end of May, 2012, the civil war had resumed. A second cease-fire in October also failed. 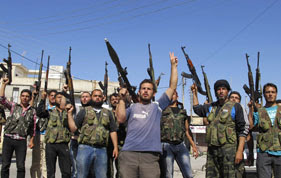 So just who are these "armed militants" that have become a part of the FSA, and could this regional civil war affect us?  As this conflict spirals into total anarchy, jihadists have risen to become part of the armed rebellion against Assad's government.  Foremost among them is Al-Nusra Front (who call all Syrians to engage in a holy war against the government), and Ahrar al-Sham, a loose collection of various Islamist and Salafist groups who have formed a battalion to take part in the fighting.  Both groups have come under criticism for their fundamentalist ideology.
Interviews with top FSA commanders in late August 2012 expressed their concerns that the Islamists would become "a threat to stability post regime change".  One FSA commander was quoted in The Guardian as saying, "They are stealing the revolution from us and they are working for the day that comes after".  While FSA leaders have "generally condemned the emergence of jihadi groups", many of its rank-and-file members "argue they need all the help they can get".
From The Guardian report it appears that there is a lot of struggle for control within the rebel fighting force.  Lebanese soldiers have joined the fight, with the goal to wage "jihad" against the Syrian government; with various Islamist "Brigades" fighting for their own agendas.  In July of 2012, the FSA rescued two photojournalists who had been captured by one of these "Brigades", and one of them commented, "Where the FSA seems to be fighting for democracy, these foreign fighters don't want anything more than imposing sharia on Syria."
But it's not just individual foreign fighters who have joined this conflict, but foreign nations are picking sides, too.  Some analysts have interpreted the Syrian conflict as part of a regional proxy war between Sunni states, such as Turkey, Saudi Arabia and Qatar, who support the Sunni-led "rebel" opposition; and Iran and Hezbollah, who support the Alawite-led (Alawite is a branch of Shia Islam) Syrian government.  And we mustn't forget our own shadowy involvement and insinuations that have surfaced after the Benghazi tragedy.
With all this confusing infighting and foreign influence, it is no wonder that the average American can't follow what is going on in Syria; not to mention our less-than-precise news coverage.  But an article in DebkaFile, an Israeli online news source, caught my eye yesterday.  The headline read, "What comes first – a Syrian chemical attack or a US-led military showdown?"  What?!?!  Do they know something that we, the American people, don't know?  Apparently! 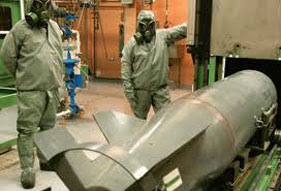 According to the article, two days ago, on Saturday, December 8, British Foreign Secretary William Hague reported evidence from intelligence sources that Syria is preparing to use chemical weapons. British intelligence sources added that Syria's chemical weapons are concentrated at five air bases and are being closely watched.  The article goes on .... so who are these "watchers" and just what are their plans, if this proves to be true?
Well, according to Debka-Net Weekly's last issue, military sources disclosed that US, Israeli, Jordanian and Turkish special forces are spread out on the ground in Syria, armed with special gear for combating chemical arms. They are close enough to count the convoys carrying canisters, shells or bombs loaded with poison gas and their reports are supplemented by orbiting US military surveillance satellites and drones able to pinpoint the position of the chemical munitions at any given moment.
Have you heard a peep out of Washington on this little piece of news?  All the Middle East appears to be a powder keg, and the fuse has been lit.  Where do we focus our attention?  Israel?  Iran? Syria?  And what is the United States' role in all this?  And that's not even considering what nations like Russia and Turkey are doing behind the scenes!
While the American public might be kept in the dark, the Israeli news sources are bold with their speculations.  Here is their analysis:  "We seem to be witnessing a high-stakes poker game between Washington and Damascus over a deck of chemical cards, each waiting to see who blinks first.  If the Americans attack, Assad will feel he is justified in releasing his poisonous gas over Turkey, Jordan and Israel.  But if Assad loses his nerve and lets loose with chemical weapons inside or outside Syria, the Americans will come crashing down on him with the full might of the US air, sea and marine forces standing by off the Syrian coast, along with Turkish, Israeli and Jordanian strikes against targets in Syria."
Boy, I didn't see that coming!  What's more, I don't really want to even contemplate that scenario.  It's all too much for this average American citizen; wiser heads than mine will have to figure out the next move.  And I know that there is much more to this news story than I am able to understand; perhaps some of you can enlighten us even more.  All I know is that Damascus is prominently mentioned in the Bible, and I'm smart enough to realize that its' significance isn't only reserved for some ancient time in an Old Testament prophesy.  The Word is alive and relevant to all generations and we need to keep our eye on Syria.

“See, Damascus will no longer be a city but will become a heap of ruins.  The cities of Aroer [in modern-day Jordan] will be deserted and left to flocks, which will lie down, with no one to make them afraid. "