Those Are Fightin' Words!

I'm not sure I can contain myself in this post.  I don't even like mentioning this man's name; he is such a disgusting and loathsome human being.  I usually just dismiss him for the mentally deficient excuse of a man that he is, but the hateful Bill Maher has stepped over the line this time!  In case you haven't heard, he somehow felt it was important to denigrate and malign an American icon this past weekend .... Andy Williams.

Here's what he had to say on his Twitter feed (and I will correctly spell out his twitter shorthand -- he can use all the help he can get to look halfway intelligent): ..... Andy Williams Christmas songs: I wish I could forget I found out near the end of his life he was a teabag idiot. But I can't, so put on Dean Martin.
OK, I know that he thinks all of us who identify in the least with Tea Party sentiments are worthless peabrains.  That's alright --- I don't give a damn what he thinks about me.  But to vilify one of the most-beloved American icons .... (who just happens to spawn emotional and sentimental feelings during the Christmas season) .... is too much for me.  I can't remain silent. 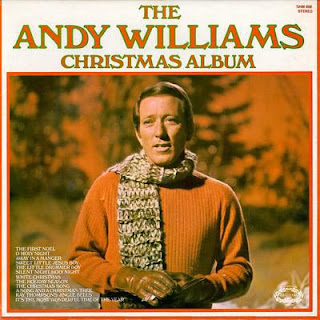 Does he hate Mr. Williams because he represents the old-fashioned conservative image of America?  Or is the venom coming from the fact that our beloved Andy is so closely tied to Christmas, which the atheist Maher despises?  Whatever the reason, I won't let his slam go unanswered.
If you're like me, you remember those Christmas holidays, when the entire family gathered in front of the TV for the Andy Williams Christmas special.  It was an event in our household!  All us kids quit pestering each other for a full hour, while my parents looked forward to ending their hectic day on a joyful note.  This was no second-rate TV show!  The sets and stage scenes were elaborate, and all the old favorite Christmas songs would be sung.   You looked forward to the ever-present Osmond Brothers, and my mother's favorite, the Lennon Sisters from the Lawrence Welk show.
Andy's own brothers would join him for a song or two, and his beautiful wife and children were always a part of the show, along with his parents.  You really felt like you were witnessing a happy family celebration.  And that voice!  His rendition of "O, Holy Night" brings tears to me eyes.  And "It's the Most Wonderful Time of the Year" just signifies Christmas to millions of people!  I remember that was one of the first albums my Dad bought when he purchased a new console stereo unit.  We must have played that Christmas album several hundred times.  It finally wore out!
And from what I've heard, when the TV executives no longer found Andy "relevant", he took his show to Branson and continued to entertain millions of Americans who still valued his brand of quality entertainment.
So I know that loving Andy Williams may sound corny.  But hearing his smooth, mellow voice and those incredible notes can instantly return me to a time when America felt connected, and the love of Christmas was shared by all.  I'm sorry that Bill Maher can't appreciate that.  I can't imagine how miserable his soul must be.  As for me, I'll continue to celebrate Andy Williams and what he represents:  a time when Christmas was about family and not commercialism; a time when, as a nation, we valued what this holy holiday meant; and a time when a simple, understated, and uncomplicated man could be admired for a God-given talent that brought such joy to millions.  Rest in peace, Mr. Williams.  While you entertain the angels in Heaven, you will sing on in my heart and memories.