The Power Of The Unions ... Is It On The Decline?

Recent history has seen a rise in the conflict between public sector unions and the private sector work force, while the membership in unions is declining at a steady rate.  I confess that I do not entirely understand the climate of this conflict, other than knowing that costly pensions and health plans for union workers were cited as part of the reason GM and Chrysler were forced to accept bailout money from the Federal Government, and ultimately us, the taxpayer.
Oftentimes, due to extravagant labor agreements, these union workers were expected to earn more during their retirement years than they had earned during their entire working career.   The payout on these labor agreements made it difficult for the automakers to remain competitive with foreign companies.  The other side of this argument is that the United Auto Workers felt they had made extensive concessions over the last couple of decades in order to help the automakers stay competitive, and were therefore due these entitlements.
But it is a fact that union workers make anywhere from 10-30% higher wages than workers in the private sector, and that difference is subsidized by we, the taxpayer.  Now, I'm not sure which side of the fence you fall on, but with the union battle we witnessed in the state of Wisconsin last year, and the controversial "card check" and "right to work" legislation that is at the forefront of the news, it is obvious that this issue is escalating. Anyone willing to propose change in the union environment, comes under attack.  These attacks have now progressed from verbal to physical.  Where is this headed? 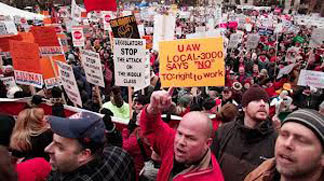 I will agree that the idea behind the creation of unions is a worthy one.  The American worker should be protected from unscrupulous employers.  They should receive a fair wage, and have the ability to bargain for better benefits.  But when those benefits become so costly that the average American taxpayer can no longer afford to foot the bill for so-called "cadillac plans", while they, themselves, are struggling to make their own modest salaries stretch to cover health plans and retirement ..... then, something's got to give.
I can testify to just how much better the benefits are for Federal workers than for you or me.  After struggling for a few years to raise a young family on a teacher's salary, my father went to work as a Civil Service employee for the Federal government.  He didn't make great money, but was able to retire with a comfortable pension and, I later learned, an incredible health benefits plan.  At the time of his death, my family received the Explanation of Benefits from his short hospital stay.  The cost was $80,000 --- paid in full by his High Option Blue Cross insurance plan.  I dare say, none of the Blue Cross plans that I've been offered include 100% coverage.
There are approximately 2.8 million federal workers at this date.  If everyone of them receives this same health care plan, it is simply unsustainable.  Include the cost of pensions, and you can see that the numbers just don't add up.
I know that teachers and police and firefighters do not receive enough pay for the valuable work they contribute to society.  But the country is going broke and it is a reality that we must make some changes to bolster our economy; encourage and develop new industries that will result in new jobs --- and not necessarily union jobs.
It is obvious that unions have wielded much power throughout their history, and many have gotten used to the "automatic ride" they receive through their union benefits.  They are a natural target vote for politicians, which naturally leads to corruption.  And threatened with declining numbers and state governments who want to become more inviting to industries and prospective employers, the unions have turned to disruptive tactics, if not outright violence, to hold on to their power.
I know it must be difficult to face the realization that what you've come to expect, to count on, and even to feel you deserve, might be coming to an end .... but do they really feel they should be paid for accumulated unused vacation and sick time during their career?  The state of Florida has reported that since 2007, they have paid out over $22 Million in such benefits.  And the rate of that unused vacation pay is oftentimes at the rate they retire at, not the rate it was earned; so that rate could be 2, 3, 10 times what they started with.
It is not my intent to vilify public workers, but to point out that these elaborate contracts can no longer be sustained.  There is a huge divide in this country: between people retiring at 50 and enjoying these extravagant benefits, and the millions of non-union workers who are simply seeking any employment.  We must be able to have a civil dialogue and come to a mutually agreeable conclusion.  Violence is not the answer!

Isaiah 1:31     "The mighty man will become tinder and his work a spark; both will burn together, with no one to quench the fire."