The "Pathway" To Hell

This post was very hard for me to write.  What I'm about to share has seen limited exposure on Fox News, while some of the more conservative talk radio hosts have probed deeper into the subject.  But I want to try to explore this abomination through the annals of history and show you where we're headed. 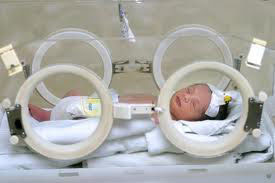 I'm sure you have heard the report by a "whistleblower" physician in the UK about the accepted practice of "death pathways" among sick children, including newborn disabled babies.  Apparently, the much-lauded National Health Service (NHS) not only facilitates, but advocates, end-of-life treatment for the elderly, the terminally ill, and now the very young.   You remember the NHS, right?  They were featured and applauded at this year's Olympics as the future of nationalized healthcare; with Mary Poppins-like caregivers dropping from the sky to tuck the sick little children into their hospital beds.  This notorious healthcare system is primarily funded through general taxation rather than requiring insurance payments.  Sound familiar?
A protocol for dying elderly patients has been in force for a decade.  Now one is being developed for children.   Parents have to agree to their child going on the death "pathway", often being told by doctors it is in the child’s ‘best interests’ because their survival is ‘futile’.  But just what are the doctors' objectives?  Many say to free up hospital beds and reduce the costs of the public program.
But let me tell you just how inhumane and abhorrent this healthcare system has become.  According to the physician who exposed this evil, the "pathway to death" is anything but peaceful and compassionate.  In the acclaimed British Medical Journal, the doctor describes this "pathway" as a 10-day process, during which the baby becomes “smaller and shrunken.”  He admitted to starving and dehydrating ten babies to death in the neonatal unit of one hospital.  This doctor wrote of the pain of watching the slow, forced deaths of newborn babies. One baby’s parents decided to put their infant on the “pathway” because of a “lengthy list of unexpected congenital anomalies,” according to the doctor. Parents, for God knows what reasons, are willing to sacrifice their children, rather than attempt to give them life.
As I contemplated this unimaginable scenario, I realized that in the history of man, this is nothing new.  You must remember that I see things from a Biblical worldview, not a secular worldview.  I see history as a continuous playing out of God's attempt to reconcile Himself with His creation, versus seeing historical events and time periods as separate and unrelated occurrences.
China is a modern example of a nation's willingness to sacrifice its children, and the diabolical results of such practices.  Their one-child policy has resulted in a shortage of female children (since males are preferred, and females are "discarded" in a variety of ways).  This infanticide has led to a shortage of brides and an increase in sex trafficking.  America's embrace of abortion is reprehensible, and has likewise resulted in a declining population among certain demographics 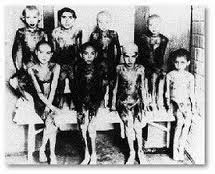 One need only go back 70 years or so to discover the secret edict issued by Hitler in WWII Germany.  His infanticide policy required midwives and doctors to report every child born with disabilities, in order to keep track of all for potential killing, regardless of how mild the impairment.  German doctors killed tens of thousands of disabled babies.  In his book, Culture of Death, author Wesley J. Smith offers this account:  The first known German government-approved infanticide, the killing of Baby Knauer, occurred in early 1939.  The baby was blind and had a leg and an arm missing.  Baby Knauer’s father was distraught at having a disabled child.  So, he wrote to Chancellor Hitler requesting permission to have the infant “put to sleep.”  Hitler had been receiving many such requests from German parents of disabled babies over several years and had been waiting for just the right opportunity to launch his euthanasia plans.  The Knauer case seemed the perfect test case.  He sent one of his personal physicians, Karl Rudolph Brandt, to investigate.  Brandt’s instructions were to verify the facts, and if the child was disabled as described in the father’s letter, he was to assure the infant’s doctors that they could kill the child without legal consequence.  With the Fuhrer’s assurance, Baby Knauer’s doctors willingly murdered their patient at the request of his father.  Brandt witnessed the baby’s killing and reported back to Hitler who was pleased all went as planned.  Based on this case of requested infanticide, Hitler signed the order permitting doctors to kill disabled infants. 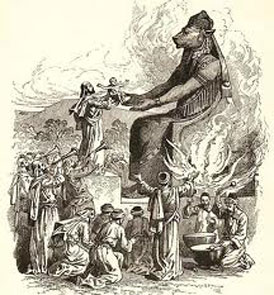 Unfortunately, infanticide is not something that belongs only to the 20th or 21st centuries.  Infanticide, was common throughout the Roman Empire and other parts of the ancient world, according to a new study in the Journal of Archeological Science.  And researchers working an excavation at Ashkelon, Israel found the skeletal remains of 100 infants, all about the same full-term age. They were not buried, but instead were cast into a sewer that ran beneath a brothel. Researchers suspect that most such victims were suffocated to death.
These reports and findings mirror Old Testament scriptures, where we find warnings against sacrificing children to the pagan gods.  Leviticus, 2 Kings, 2 Chronicles, Isaiah and Ezekiel tell us of the practice that is an abomination in God's eyes.  The false gods in Biblical times had names like Molek, Adrammelek and Anammelek.  Today, we sacrifice our children to false idols and doctrines known as population control, women's rights, quality of life, and convenience.
All these reasons are being tied up in a nice little package called the Affordable Care Act.  Just take a look at the NHS and you see our future.  They are going broke and cannot be sustained.  This results in radically reduced services. When human life is regarded as disposable -- whether it be babies or the elderly -- and cost control replaces treatment as the main objective, then anything that enables government to reduce costs is possible.  It then is only a matter of conditioning the public to accept lower-quality care and rationing, otherwise known as the "pathway."
Sacrificing children is nothing new in the history of man, but that doesn't make it any less detestable to the God of Creation.  He warned ancient Israel about His coming judgment, so what makes us think we will go unjudged?  Listen to His words:

Ezekiel 20:31-33     "When you offer your gifts—the sacrifice of your children in the fire—you continue to defile yourselves with all your idols to this day .... You say, “We want to be like the nations, like the peoples of the world, who serve wood and stone.” But what you have in mind will never happen.  As surely as I live, declares the Sovereign Lord, I will reign over you with a mighty hand and an outstretched arm and with outpoured wrath."