Just How Wise Were The Wise Men?

How many of us remember taking part in the school Christmas play?  It was an honor to be selected, and children scrambled for the "choice" parts.  The story is a familiar one, and worth revisiting.  The characters in the story are well known; from Mary and Joseph, the young couple who are about to receive the Son of God as their first child; the Innkeeper who has to turn them away from his crowded domicile; the Shepherds and the Wise Men.  And it is the latter that I want to take a closer look at on this Christmas Eve.
Matthew 2:1-12 gives us the narrative of their role in the Christmas story.  Scripture tells us that the Star of Bethlehem appeared only to the magi in the East (the “East” most likely being the area of Persia, or modern-day Iran). There is no biblical record of anyone else observing this phenomenon. The magi saw something in the heavens that alerted them the Jewish Messiah was to be born (in Matthew 2:2 the magi refer to the star as being “His star”). The Star prompted them to travel to Jerusalem, the Jewish capital. This would be the logical place to start looking for the birth of the King of the Jews, right? 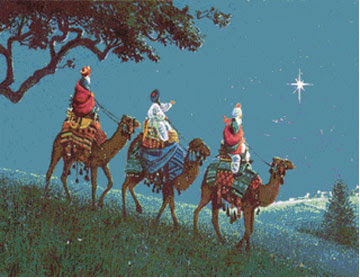 When the magi were told that the Messiah would be born in Bethlehem, not in Jerusalem, they left in search of Him.  The Bible records that Herod "sent them to Bethlehem".  After they left Herod, the Star that appeared to them in the East re-appeared and led them to the place Joseph and Mary were then staying.   If you are like me, you grew up with images of the nativity scene that showed the wise men visiting Jesus on the night of His birth. That is likely not what happened. The fact that Herod had all male babies two years old and under in Bethlehem killed indicates that up to two years had passed since the wise men first saw the star - and possibly since Jesus' birth.
The fact that the magi were most likely Persian is fascinating to me, and raises another question.   How would Persian magi know about the Jewish Messiah? They would have been exposed to the writings of the Jewish prophet Daniel, who had been the chief of the court seers for Persia, while in Babylonian captivity.  Daniel 9:24-27 is a prophecy that gives a timeline for the birth of the Messiah. Also, they may have been aware of the words of the pagan prophet Balaam (who was from the town of Pethor on the Euphrates River near Persia). Balaam's prophecy (Numbers 24:17) specifically mentions a “star coming out of Jacob.”
In addition, there is another interesting fact in this story:  celestial bodies normally move from east to west due to the earth’s rotation, yet this Star led the magi from Jerusalem south to Bethlehem. Not only that, but it led them directly to the place where Joseph and Mary were staying, stopping directly overhead.  God's glory directed their journey.
As a child, I was intrigued by the gifts they brought:  gold, frankincense, and myrrh.  Matthew 2:11 tells us that upon finding the baby Jesus, “they bowed down and worshiped him. Then they opened their treasures and presented him with gifts of gold and of incense and of myrrh”.  Just what were the significance of these gifts?
Gold is, and has always been, a precious metal.  Its value could very well have financed Joseph and Mary’s trip to Egypt. The Bible does not tell us any other significance to these three gifts;  however, tradition has it that there is a deeper meaning for each of the three. Gold is a symbol of divinity and is mentioned throughout the Bible.  Pagan idols were often made from gold and the Ark of the Covenant was overlaid with gold. The gift of gold to the Christ child was symbolic of His divinity—God in the flesh.
Frankincense is a white resin or gum, obtained from a tree. It is highly fragrant when burned and was used in worship, where it was burned as a pleasant offering to God (Exodus 30:34).  Frankincense is a symbol of holiness and righteousness.  The gift of frankincense to the Christ child was symbolic of His willingness to become a sacrifice, giving Himself up, as in a burnt offering.
Myrrh was also a product of Arabia, and was obtained from a tree in the same manner as frankincense. It was a spice and was used in embalming. It was also sometimes mingled with wine to form a drink.  A similar drink was given to our Savior when He was about to be crucified, as a numbing potion.  Myrrh symbolizes bitterness, suffering, and affliction. The baby Jesus would grow up to suffer greatly as a man, and would pay the ultimate price when He gave His life on the cross for all who would believe in Him.
These precious gifts offered by the wise men to Jesus were costly, and they worshiped Him.  God warned them in a dream against returning to Herod, so, in defiance of the king, they left Judea by another route, and that is the last we hear of them.
So how wise were the Wise Men?  Well, the magi were men who 1) read and believed God's Word, 2) sought out the Jewish Messiah,  3) recognized the worth of the baby Jesus,  4) humbled themselves to worship Him, and  5) obeyed God rather than man.
If the standards of these Wise Men from Persia were observed today, what a better place the world would be!  On the eve of the birth of our Savior, I invite every one to humble themselves as these wise, prayerful men did, and to worship the Baby who was born to save us all.  Merry Christmas!

Matthew 2:6    "But you, Bethlehem, in the land of Judah, are by no means least among the rulers of Judah; for out of you will come a ruler who will shepherd my people Israel."