2012 In Review: Focus On the Middle East

I don't think there was a day that went by in 2012 that there wasn't a headline or news story about someplace or somebody in the Middle East.  Muammar Gaddafi and Hosni Mubarak have left the world stage, while the Muslim Brotherhood in Egypt and the war in Syria have taken center stage.  Lurking in the background is Iran, and who doesn't think they are playing Puppet Master and pulling the strings of multiple players? 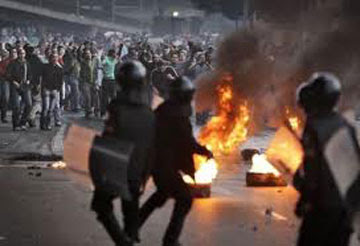 War drums sounded as the Israeli-Palestinian conflict ignited.  It's hard to believe that the Hamas-backed Palestinians truly want peace.  As cited by Mark Kahlberg on BizPac Review, not only do Palestinian leaders use their media to say contradictory things about peace in English and Arabic, but "The top Muslim religious leader Mahmoud Abbas called for the killing of Jews. The Palestinian Authority information website, directly affiliated with PLO leader Abbas, publishes anti-Semitism openly.  Schools teach hatred, and Palestinian television programs incite young Muslims to “kill and eat Jews.”   School textbooks are used to “educate” Palestinian children to hate Jews.  Palestinians for the most part hate Christians almost as much as they hate the Jews."  So much for any hope of a lasting peace.
Then perhaps the top Middle East story for American citizens is Benghazi, Libya and the deaths of our American Ambassador and three other brave men.  Will we ever hear the truth?  People were rescued from that "consulate".  Why haven't we heard from them?  How was Ambassador Stevens involved with the Syrian rebel forces?  And what did David Petraeus, as Director of the CIA, know that was so damning that he had to be brought down by an illicit affair?  I know this all sounds like conspiracy talk, but nothing is adding up in this whole affair, and the entire thing stinks!
The rise of Islamic jihadists in Libya, Syria, Yemen and Africa assure that the Middle East will stay on the world's radar throughout 2013.  Sharia law is raising its ugly head wherever fundamentalist and extremist Muslims reside.  The war in Afghanistan continues to take American lives.
But if one were looking for a ray of hope in the Middle East, it would be in the story of Malala Yousufzai, the Pakistani girl who was shot by the Taliban for promoting education for secular girls.  She refused to back down and in the face of evil, she continues her cause.
So what can we expect as the year 2012 eases into 2013?  My fear is not only more of the same, but an increase in the Muslim Brotherhood's influence as well as rising rhetoric against the West.

Isaiah 42:25     "So he poured out on them his burning anger, the violence of war. It enveloped them in flames, yet they did not understand; it consumed them, but they did not take it to heart."