I think you will agree that the Chick Fil A event was a lightning rod for our culture.  It was hard to be noncommittal on this issue; you either agreed with the sentiments and policies of the fast-food chain, or you supported gay marriage.  When the CEO of Chick Fil A exercised his freedom as an American citizen to support groups that agreed with his religious belief in the Biblical definition of marriage, then he quickly became an enemy of the Progressive Left.  How dare he deny gay and lesbian partners their civil right to marry!  Of course, the gay community thought nothing of denying him his civil rights to freedom of speech and to practice his faith as he saw fit, and called for boycotts and public protests.  To put it mildly, the plan failed. 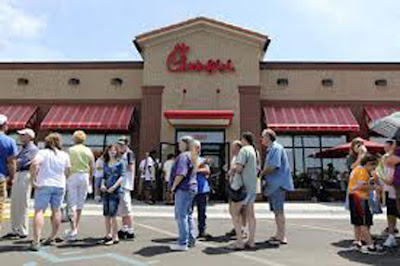 What resulted was one of the largest outpourings of support among the American public for an individual to operate his business as his conscious dictated.  The fact that government officials in Chicago and Boston sought to bully the restaurant into changing their position, or risk losing franchise options in their cities, smacked of prohibiting the chain's First Amendment rights.
After the uproar receded, there was some further controversy about whether Chick Fil A had capitulated to pressure to conform their company's charitable giving policies to a more politically correct agenda of not donating to groups that opposed gay marriage.  If you listen to the Left, they yielded.  If you believe Dan Cathy, the CEO and original target of the Lesbian/Gay groups, their position remains the same .... to treat all people with respect and dignity.
The furor over the Chick Fil A controversy may have subsided, but the agenda to grant lesbian/gay couples the right to "be married" is just getting started.  I'm still confused as to why it is important for them to be able to label themselves as "married".  It seems to me it is the civil rights they want .... to be recognized as a union of two adults so that they might receive legal status for buying a home, benefits, and power of attorney.  Marriage is a biblical tenet, specifically designed by God in order to propagate his created world.  It takes a man and a woman to accomplish that.  Period.
So, unless I am mistaken, this seems like the perfect end-around play to push God further out of our culture.  Deny His definition of marriage and you deny Him; replacing Him with a secular "god of equality for all".  It is one more scheme that the Enemy has employed to deceive mankind and separate them from God's will.  I have no doubt that this agenda will move forward at a breakneck speed.  Our society, our culture, and our children will pay a heavy price.