Final Words From A Wise Man 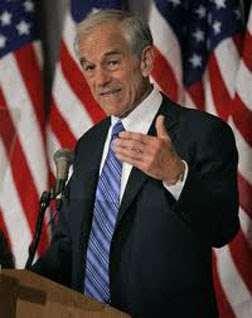 Last week, Ron Paul made what will most likely be his final farewell address to Congress.  At the end of the year, he will have completed 23 years of public servanthood.  His address was made without much fanfare, and the MSM hardly mentioned it.  I have had serious conflicts with some of Mr. Paul's political positions, but this three-time candidate for the highest office in the land had some things to say that left a memorable impression upon me.  He spoke for, what I believe was around 45 minutes, and I would like to share some of the highlights of that speech.  As the foremost proponent of freedom and liberty through less government, Mr. Paul had a huge impact on our political identity and he leaves us with sage advice:

•  His stated goal and purpose throughout his Congressional tenure was to "promote peace and prosperity by a strict adherence to the principles of individual liberty."

•  Congressman Paul laments that he accomplished very little in his long career.   "In spite of my efforts, the government has grown exponentially, taxes remain excessive, and the prolific increase of incomprehensible regulations continues.....  A grand, but never mentioned, bipartisan agreement allows for the well-kept secret that keeps the spending going.  One side doesn’t give up one penny on military spending, the other side doesn’t give up one penny on welfare spending, while both sides support the bailouts and subsidies for the banking and corporate elite."

•  "The major stumbling block to real change in Washington is the total resistance to admitting that the country is broke.... The country and the Congress will remain divisive since there’s no 'loot left to divvy up.' "

•  "I have thought a lot about why those of us who believe in liberty, as a solution, have done so poorly in convincing others of its benefits.... history has shown that the masses have been quite receptive to the promises of authoritarians which are rarely if ever fulfilled.... If authoritarianism leads to poverty and war and less freedom for all individuals and is controlled by rich special interests, the people should be begging for liberty."

•  "During my time in Congress the appetite for liberty has been quite weak; the understanding of its significance negligible.  Yet the good news is that compared to 1976 when I first came to Congress, the desire for more freedom and less government in 2012 is much greater and growing, especially in grassroots America. Tens of thousands of teenagers and college age students are, with great enthusiasm, welcoming the message of liberty."

•  Congressman Paul gives us his opinion on where we got so far off track:  "Freedom, private property, and enforceable voluntary contracts generate wealth.  In our early history we were very much aware of this.  But in the early part of the 20th century our politicians promoted the notion that the tax and monetary systems had to change if we were to involve ourselves in excessive domestic and military spending. That is why Congress gave us the Federal Reserve and the income tax.  The majority of Americans and many government officials agreed that sacrificing some liberty was necessary to carry out what some claimed to be “progressive” ideas. Pure democracy became acceptable."

•  "Some complain that my arguments make no sense, since great wealth and the standard of living improved  for many Americans over the last 100 years, even with these new policies....  But the damage to the market economy, and the currency, has been insidious and steady....  Most of our wealth today depends on debt."

•  "The material benefits became more important than the understanding and promotion of the principles of liberty and a free market.  It is good that material abundance is a result of liberty but if materialism is all that we care about, problems are guaranteed....  The crisis arrived because the illusion that wealth and prosperity would last forever has ended."

•  "The current crisis elicits a lot of pessimism.  And the pessimism adds to less confidence in the future.  The two feed on themselves, making our situation worse."

•  "Everyone claims support for freedom.  But too often it’s for one’s own freedom and not for others.  Too many believe that there must be limits on freedom. They argue that freedom must be directed and managed to achieve fairness and equality thus making it acceptable to curtail, through force, certain liberties.  Some decide what and whose freedoms are to be limited.  These are the politicians whose goal in life is power."

•  "But there is good evidence that the generation coming of age at the present time is supportive of moving in the direction of more liberty and self-reliance. The more this change in direction and the solutions become known, the quicker will be the return of optimism."

•  "Our job, for those of us who believe that a different system than the one that we have had for the  last 100 years, has driven us to this unsustainable crisis, is to be more convincing that there is a wonderful, uncomplicated, and moral system that provides the answers.  We had a taste of it in our early history. We need not give up on the notion of advancing this cause."

•  ".... we allowed our leaders to concentrate on the material abundance that freedom generates, while ignoring freedom itself.  Now we have neither, but the door is open, out of necessity, for an answer.  The answer available is based on the Constitution, individual liberty and prohibiting the use of government force to provide privileges and benefits to all special interests."

•  "Too many people have for too long placed too much confidence and trust in government and not enough in themselves."

•  "Our Constitution, which was intended to limit government power and abuse, has failed.  The Founders warned that a free society depends on a virtuous and moral people.  The current crisis reflects that their concerns were justified."

•  "I have come to one firm conviction after these many years of trying to figure out “the plain truth of things.”  The best chance for achieving peace and prosperity, for the maximum number of people world-wide, is to pursue the cause of LIBERTY."

These few quotes represent just a modicum of Ron Paul's counsel and warnings to his fellow Congressmen.  Whether you agree with him politically, or not, I don't believe that anyone can question his love of country or liberty.  He has stood his ground and upheld his Constitutional principles in the face of ridicule and hostile indictments.  I invite you to read his entire speech, as he argues his positions and points out the failures and promises of America.  You may not agree with everything he says, but I think his words deserve our consideration.  While he lays the blame squarely where it belongs, at the feet of a power-hungry bureaucracy, he is not without hope.  He provides a path forward for those willing to consider the potential of following Liberty,
And in his own words, If you find this to be a worthwhile message, spread it throughout the land.

Ecclesiastes 7:5    "It is better to heed the rebuke of a wise person than to listen to the song of fools."