A Show Of Thanksgiving 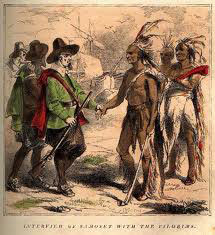 Today, of all days, I wanted to give everyone a gift of the true meaning of Thanksgiving.  Those of us who are more mature in age remember what it was like to hear the story of the Pilgrims and Squanto, the Native American who helped them survive a brutal winter.  He taught them how to grow maize and catch fish from the local waters.  He was a vital part of Plymouth Colony's success, and the first Thanksgiving in our country was held to celebrate the bountiful harvest.
Flash forward a couple of centuries plus a few decades, and what sentiments have we, as a nation, kept from that first Thanksgiving?   It seems to me, we give voice to the idea of giving Thanks for our many blessings, but do we really do anything to express our gratitude?  For most people, this family holiday simply centers around food.
So how could I combine the ideas of Food and giving Thanks, while helping us to focus on what that really means?  On Monday, a good friend sent me an email and I knew I had found my analogy.  You may have seen this before, but I think we can all benefit from visiting this story.  Enjoy!

I put my carry-on in the luggage compartment and sat down in my assigned seat. It was going to be a long flight. 'I'm glad I have a good book to read. Perhaps I will get a short nap,' I thought.
Just before take-off, a line of soldiers came down the aisle and filled all the vacant seats, totally surrounding me. I decided to start a conversation. 'Where are you headed?' I asked the soldier seated nearest to me.  'Petawawa. We'll be there for two weeks for special training, and then we're being deployed to Afghanistan.’
After flying for about an hour, an announcement was made that sack lunches were available for five dollars... It would be several hours before we reached the east, and I quickly decided a lunch would help pass the time... As I reached for my wallet, I overheard a soldier ask his buddy if he planned to buy lunch.  'No, that seems like a lot of money for just a sack lunch. Probably wouldn't be worth five bucks.  I'll wait till we get to base.'  His friend agreed.
I looked around at the other soldiers. None were buying lunch. I walked to the back of the plane and handed the flight attendant a fifty dollar bill. 'Take a lunch to all those soldiers.' She grabbed my arms and squeezed tightly. Her eyes wet with tears, she thanked me. 'My son was a soldier in Iraq ; it's almost like you are doing it for him.'
Picking up ten sacks, she headed up the aisle to where the soldiers were seated. She stopped at my seat and asked, 'Which do you like best - beef or chicken?' 'Chicken,' I replied, wondering why she asked. She turned and went to the front of the plane, returning a minute later with a dinner plate from first class. 'This is your thanks.'
After we finished eating, I went again to the back of the plane, heading for the rest room.  A man stopped me. 'I saw what you did. I want to be part of it... Here, take this.' He handed me twenty-five dollars.
Soon after I returned to my seat, I saw the Flight Captain coming down the aisle, looking at the aisle numbers as he walked, I hoped he was not looking for me, but noticed he was looking at the numbers only on my side of the plane. When he got to my row he stopped, smiled, held out his hand and said, 'I want to shake your hand.' Quickly unfastening my seatbelt I stood and took the Captain's hand. With a booming voice he said, 'I was a soldier and I was a military pilot. Once, someone bought me a lunch. It was an act of kindness I never forgot.' I was embarrassed when applause was heard from all of the passengers. 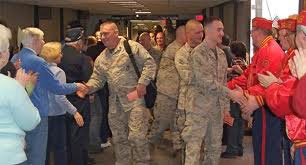 Later I walked to the front of the plane so I could stretch my legs. A man who was seated about six rows in front of me reached out his hand, wanting to shake mine. He left another twenty-five dollars in my palm.
When we landed I gathered my belongings and started to deplane... Waiting just inside the airplane door was a man who stopped me, put something in my shirt pocket, turned, and walked away without saying a word. Another twenty-five dollars!
Upon entering the terminal, I saw the soldiers gathering for their trip to the base.  I walked over to them and handed them seventy-five dollars. 'It will take you some time to reach the base.  It will be about time for a sandwich. God Bless You.'
Ten young men left that flight feeling the love and respect of their fellow travelers. As I walked briskly to my car, I whispered a prayer for their safe return. These soldiers were giving their all for our country. I could only give them a couple of meals. It seemed so little... A veteran is someone who, at one point in his life, wrote a blank check made payable to 'The United States of America ' for an amount of 'up to and including my life.'

That is Honor, and there are way too many people in this country who no longer understand it.'

Sack lunches may seem an insignificant way to give back our "Thanks" to those who are a huge part of our success as a nation.  But once again, the simple act of offering food to another human being can feed more than their stomachs.  The souls of those soldiers were fed by the generosity of one man.  And that one gesture led to more displays of thanks from grateful countrymen.
So my prayer for you today, is that you will find meaningful ways to express your "Thanksgiving"; ways to show your gratitude for all the blessings that have been bestowed upon your life.  This is a beautiful holiday ..... let's celebrate its' true Spirit!

Philippians 4:5-7      "Let your gentleness be evident to all. The Lord is near.  Do not be anxious about anything, but in every situation, by prayer and petition, with thanksgiving, present your requests to God.  And the peace of God, which transcends all understanding, will guard your hearts and your minds in Christ Jesus."