"Welfare" Has Become The Norm 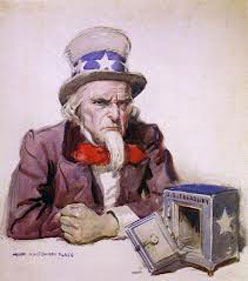 Did you know that the government spent approximately $1.03 trillion on 83 federal welfare programs in fiscal year 2011 alone, making this the government's largest expenditure?  Did you also know that Federal welfare spending has grown by 32 percent over the past four years; increased through stimulus spending and by the growing number of Americans whose economically damaged incomes now qualify them for public assistance?  Before you accuse me of being cold-hearted or indifferent, I believe in the Christian principle of helping those who need a helping hand.  Unexpected illnesses, the death of a head-of-the-household, and unforeseen tragedies or loss of income can all devastate a family's finances.  But  I think we can all agree that the Welfare State has gotten out of control and will be our ruin if we don't get drastic reform.  But it might also surprise you to learn that historically, social welfare has been a part of the United States since its inception.
In the early days of our country, the colonies imported the British Poor Laws. These laws made a distinction between those who were unable to work due to their age or physical health and those who were able-bodied but unemployed. The former group was assisted with cash or alternative forms of help from the government. The latter group was given public service employment in workhouses.
As our country grew, social welfare apparently began to become a problem, and in the 1800's social caseworkers tried to help the poor move towards work, rather than continuing to need assistance.  The Civil War Pension Program was passed in 1862 and provided aid to Civil War Veterans and their families.  As the turn of the century approached, reformers urged caseworkers to train the poor in morals and to encourage a work ethic. 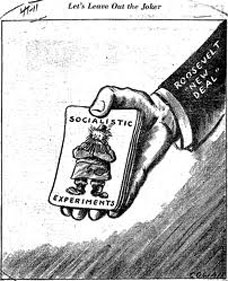 The history of welfare as we know it began in earnest during the Great Depression in the 1930's.  More than 25% of the population were out of work and families were suffering.  President Franklin D. Roosevelt raised the bar for government assistance by signing into law the Social Security Act and the Aid to Families and Dependent Children (AFDC) Program.  Of course, you can't have massive government programs without agencies to oversee them, right?  Hence, the Department of Health and Human Services (HHS), the Department of Housing and Urban Development (HUD), and the Departments of Agriculture, Labor and Education were born.
Then in 1964, LBJ and his "Great Society" programs sealed the deal.  The massive entitlement programs that flowed out of Washington damaged the soul of the American spirit.  The segment of the population that it was designed to help the most, became the most broken.  The family unit was abandoned in favor of receiving money from the government,  and this resulted in fatherless families, rising abortions and generations locked in the prison of poverty.
I remember when being on Food Stamps and accepting Welfare from the Government was something one hid from the public.  If your family received government assistance, it was not something that you wanted others to know; you were humiliated and ashamed.  It was not a situation one sought or desired.  People accepted this aid as a last resort, and only until they could get back on their feet and supply their own means of income.
When I was three-and-a-half years old, my father supported his young family by selling insurance.  My mother stayed home to care for me, and my younger brother and newborn baby sister.  One day, my mother received the phone call that changed our family's life.  My father's car had been T-boned by a cement truck, completely demolishing it.  He had been pulled out of the wreckage just moments before the car exploded by a kindhearted and anonymous bystander.  The accident resulted in my father being in a body cast for over a year and obviously out of work for much longer.
They could have easily qualified for assistance, yet it wasn't even a consideration.  Family members stepped in and supplemented what the insurance settlement didn't cover.  My mother provided all of Dad's after-hospital care while he recuperated at home, and continued to maintain the home and the responsibilities of three small children.  It was a very difficult time for them.  But my dad instilled in me how families help each other out in times of need, and how one was never to expect or accept help without paying it back.  I know it was years before he repaid the debt to his older brother, but it was important to him that his family not get trapped in the government system.
What happened to that kind of attitude?  I stood in line behind a woman at the grocery store yesterday, who had no qualms about buying a huge shopping cart of food on her Electronic Benefit Transfer (EBT) card, which is what they call Food Stamps now.  It even looks like a regular credit card!  She confidently indicated which items she would pay cash for, and which she wanted applied to her EBT.  There was absolutely no stigma attached to using this form of a government handout.  I just wanted to gently remind her that I helped pay for her food, as well as purchasing my own. 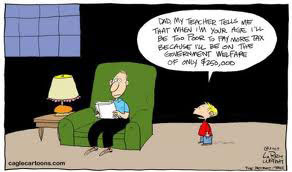 I guess what disturbs me beyond the trillion dollar price tag, the growing number of recipients, and the routine use of entitlement programs is the lack of pride.  We have generations of Americans who see no dignity or honor in succeeding on your own; they see no purpose or motivation for success, and instead opt for failure because it's "free".  How do you re-instill self-respect and self-worth when the government now openly runs TV ads inviting people to apply for welfare.?
You can call it "benefits", "supplemental assistance", SNAP cards, Medicaid or whatever you wish.... it's all the same .... these programs are free financial support provided by the workers of this nation.  And the numbers show us that it cannot be sustained.  It's a sad state of affairs when the Welfare State has become the Provider for millions of Americans.
We're a long way from the mindset of what this country used to stand for.  Ponder this statement by Benjamin Franklin and then ask yourself, "How did we get so far off track, and how do we find our way back to virtue and respectability?"
"I am for doing good to the poor, but I differ in opinion of the means. I think the best way of doing good to the poor, is not making them easy in poverty, but leading or driving them out of it. In my youth I traveled much, and I observed in different countries, that the more public provisions were made for the poor, the less they provided for themselves, and of course became poorer. And, on the contrary, the less was done for them, the more they did for themselves, and became richer." --- Benjamin Franklin, 1766.

Isaiah 32:7      "Scoundrels use wicked methods, they make up evil schemes to destroy the poor with lies, even when the plea of the needy is just."
Posted by Pam Kohler at 7:00 AM