".... for nothing restrains the LORD from saving
by many or by few."

Although this passage of Scripture comes from 1 Samuel and tells us of the defeat of the Philistines at the hand of King Saul's son Jonathan, I want to show you how this passage also pertains to the story of Gideon and his valiant three hundred warriors in the book of Judges.  And because God is forever working throughout history and his people, this verse also applies to us today.
In Judges, we learn that an angel of the Lord has appeared to Gideon and told him that he will be victorious in battle against the great Midianite army.  You have to remember that Gideon was not a battle-hardened soldier of Israel.  He was threshing his family's wheat in the winepress, in order to hide it from the approaching Midianites.  So imagine his consternation when this supernatural experience happens to him!  The angel appears and says, "The LORD is with you, you mighty man of valor!"
I'm sure I would have reacted the same as Gideon did ..... I would have said something like, "Do you know who you are talking to?  I'm no soldier!  And besides, where is this Lord that I've heard so much about through our ancestral stories?  Where are the miracles that He supposedly performed in the past?  He may have delivered my forefathers from Egypt, but it seems to me that He has forgotten about us and we're about to be annihilated by the Midianites!"  Gideon didn't have any first-hand knowledge or experience with miracles, so he was a little skeptical.
Gideon and the Angel have a little back-and-forth discussion; the Angel again declares that Gideon will go forth and save His people from the Midianites because the Lord is with him, while Gideon asks for some proof.  Is it too much to ask for a sign or two, maybe even a miracle?  The Angel does him one better, and provides three miracles!
Feeling a little more confident, Gideon agrees to take the mantle of leadership and raises an army of over 30,000 from the northern tribes -- still long odds against the 100,000 men the enemy has brought to the field of battle.  Gideon may have been bolstered by new-found courage, but he had to have faltered a bit when faced with the departure of two-thirds of his fighting force.  You see, according to the Torah, before Israel went to battle the commander was to give an opportunity for the fearful to depart from the ranks without shame or penalty.  And 22,000 men did just that.  Gideon still had 10,000 men, and was willing to fight as instructed.
But the LORD needed to know that the nation of Israel knew who their savior was beyond a doubt; so he demanded that Gideon pare his forces down even further, resulting in a paltry army of 300.  The ending of this story is legendary.  Gideon and his 300 men surround the camp of the Midianites.  They hide torches under pitchers, and when given the signal, they all blow the shofars in their right hands, break the pitchers and hold their torches aloft with their left hands, crying, "The sword of the LORD and Gideon!"  The Midianites were deluded into thinking they were being attacked by a much larger force (who would have the chutzpah to attack such a multitude with only three hundred?) and in the ensuing confusion, the Midianites fought and destroyed themselves.  Gideon was victorious!
This story represents a concept that we would do well to embrace.  THE BATTLE BELONGS TO THE LORD!  So I want to relate this historical telling of God's power to rescue, to a story that is currently happening in Israel.  I have mentioned before that I have dear friends who are Messianic Jews, living in Jerusalem.  I receive a newsletter from an organization they are involved with and that I support.  This month I learned that the significance of Gideon's battle is not lost on them. 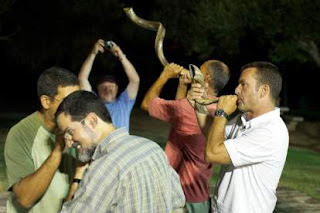 This past month a small group of Messianic Jewish men held a retreat on the slopes of Mt. Gilboa, directly above the Harod Spring --- in the same location Gideon and his army found themselves.  They, too, are vastly outnumbered.  Did you know that the number of Messianic Jews make up only two tenths of one percent of Israel's total population?  So you can imagine that they, too, feel as if a victory is out of reach.  But they decided to gather and follow Gideon's example, praying and proclaiming victory through the blowing of their shofars --- right there on Mt. Gilboa!  It helped them to understand the magnitude of Gideon's victory and how with the Lord's help, Israel can be delivered from impending doom to dominion; and from destruction to victory.

I was so inspired by the words that their retreat leader spoke through this newsletter, and I would like to share them with you:  The "weapons" at our disposal are no match for the powerful, culturally entrenched resources of those who stand against us. But that is exactly the kind of odds that the God of Israel prefers. It seems He takes pleasure in stacking the deck against Himself, "for nothing can hinder the Lord from saving by many or by few" (1 Samuel 14:6). Our part is to keep moving forward, to go in what strength we have and to remember and proclaim the covenant faithfulness of our God. The words of assurance sent to Gideon, "Surely, I will be with you" are our words too: "... even to the end of the age" (Matthew 28:20). Amen.
While these words have special relevance to our fellow Jewish Believers, we must take them into our hearts and minds, as well.  Don't pay attention to the odds against us; the Battle belongs to the Lord and He is Mighty to equip us with the means to defeat the Enemy.  "Nothing can hinder Him from saving", so hold on to his promise of "Surely, I will be with you," and expect the victory!