As the United Nations General Assembly meets this week, I thought you would find this little tidbit interesting.  Only in this crazy, upside-down world of the Twenty-first Century, could a man accused of genocide, crimes against humanity, and war crimes by the International Criminal Court (ICC) be awarded a seat on the United Nations Human Rights Council.  That's right, this self-proclaimed and exalted inter-governmental body, which is "responsible for strengthening the promotion and protection of human rights around the globe", has just agreed to let the President of Sudan, Omar Hassan Ahmad Al-Bashir, have a say in addressing situations of human rights violations and to make recommendations on them. 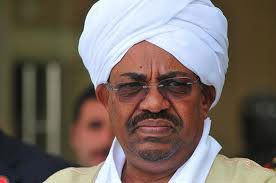 In case any of you don't recognize his name, Al-Bashir has been brought to the attention of many Americans by the efforts of George Clooney.  The actor has been on the world stage trying to bring attention to the violent conflict in Darfur, which has easily resulted in a death toll in the hundreds of thousands.
Al-Bashir assumed the Presidency of Sudan after a bloodless coup in 1989, and the ensuing years have seen his country engulfed in a violent and deadly civil war.  The Pro-Arab North has effectively decimated South Sudan and the Western region of Darfur through brutality, disease and starvation.  For his part, Al-Bashir has alternately been called a Dictator, Warlord, and Genocidal Murderer.  Sounds like the perfect person to consider matters of human rights violations, don't you think?  But why should it surprise us?  The leaders of Cuba, Iran and Venezuela also have a seat on the Human Rights Council! What's one more murderous Despot?
So how can it be that this man, who has been charged by the ICC of "murdering, exterminating, raping, torturing, and forcibly transferring citizens in his own country (through forced removal)", will be expected to uphold the highest standards in the protection of human rights?  How can a man that an independent world organization, such as Human Rights Watch, and Judicial Watch, a watchdog over our own government's judicial system, be allowed to pass judgment on other human rights violators?  And perhaps worst of all, why are Americans continuing to fund the existence of such a corrupt organization as the U.N., to the tune of over $7 Billion per year?
The fact that the U.N. is corrupt cannot be disputed.  Remember the Food-For-Oil scandal?  The problem is this:  It is not accountable to anyone.  It makes its own rules and sets its own agenda, which appears to be increasingly "one-world-like".  Tolerance, Sustainability and Equality are all U.N. touchstones.  Just a quick, cursory glance at the U.N. Secretary-General's 5-year Action Plan is enough to make the hair on the back of your neck stand up.  Most prominently, you will find Sustainability through Agenda 21, which includes Green Climate Control and securing (by 2015)  "a comprehensive climate change agreement applicable to all parties with legal force under the United Nations Framework Convention on Climate Change!
Why are we standing for this?  How do we force the U.N. out of our country?  Why are we making it easy for them to institute their brand of hegemony over us?  I feel like we have been invaded by some alien force from another planet!  They do not represent the values of a majority of Americans; yet our national policies are beginning to mirror the objectives of this renegade organization.  Our rights are being suppressed and decimated by an organization that doesn't represent us!
It seems to me that the U.N. has overstepped its original purpose.  It was founded in 1945 after World War II to stop wars between countries, and to provide a platform for dialogue.  Now it has appointed itself caretaker of international law, international security, economic development, social progress, human rights, and the achievement of world peace.  Take a look at the world!  Is it more secure?  Is the world economy stable, let alone growing?  World peace seems further away than it has ever been.  I think it is pretty obvious that the United Nations is a miserable failure.   Yet our elected officials keep signing U.N. treaties we don't want and refusing to stand up for the sovereignty of the United States.
The appointment of Al-Bashir is just a symptom of the deceit and non-relevancy of what I think is a dishonorable and frankly, evil, organization.  It will be interesting to see what develops this week, and how our country and the world will be affected.  I don't have much hope that it will be constructive or beneficial to either us or the world.

Psalm 36:2-4       "In their own eyes they flatter themselves too much to detect or hate their sin.  The words of their mouths are wicked and deceitful; they fail to act wisely or do good. Even on their beds they plot evil; they commit themselves to a sinful course and do not reject what is wrong."