Are We Doomed To Repeat History?

We are all familiar with the sayings History repeats itself because the world doesn't learn, and Those who cannot remember the past are condemned to repeat it.  I'm afraid that we are about to prove that these clichés are more truth than fabrication.  I have long been fascinated with the circumstances that led to the outbreak of WWII, and stumbled upon a very informative two-part article on a German website, (Spiegel Online International) titled The Road To WWII; Why Wasn't Hitler Stopped.  After reading it, I couldn't help but notice an alarming number of similarities with what is taking place today. 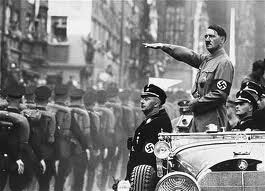 The article is an extensive look at what it was like in the days before WWII.   It explored a lot of questions that I have often wondered about.  Since Hitler was the embodiment of Evil, what were the signs that war was inevitable?  What was he saying, and what were the world's leaders doing or saying in response?  What were the efforts to appease him, and were his threats taken seriously?  It has only been 73 years since Hitler invaded Poland, resulting in a six-year war that claimed 60 million lives.  Could he have been stopped before Poland fell, and what can history teach us about what the world faces today?
Let me expound on my trail of thoughts.  Europe in the summer of 1939 resembles the Middle East in 2012.  From the ashes of defeat in WWI, Hitler and his Foreign Ministry wanted to take advantage of the postwar instability and called for a fast and comprehensive military buildup.  They wanted to dominate Europe, and Hitler set his sites on the invasion of Poland as his means of demonstrating Germany's emerging strength and dominance.  Naturally, the swift rise of the German dictator's powerful military caused unease and tension in neighboring countries and the world.
It does not take a mental giant to see the similarities with what we are facing in the Middle East. The nation of Iran is pursuing a nuclear program at breakneck speed, and it is putting the nations of the world on edge.  No one believes that it is for peaceful means alone.  Furthermore, the President of Iran, Mahmoud Ahmadinejad has openly threatened the nation of Israel.
It was well known in the German Foreign Ministry that Hitler was "not a man of logic or reason."  The same could be said of Ahmadinejad.  Although, technically, Germany found itself isolated internationally, it had no problems finding willing partners to help establish a new order over Europe.  Italy's fascist dictator Mussolini, wanted a share of the pie for himself, and unholy alliances were made. Today we see the same scenario in the Middle East.  Countries are aligning themselves in shaky alliances, all with one goal in mind:  to wipe Israel off the map.
As the Western European countries tip-toed around Hitler and his growing bravado, he continued with his massive military buildup and increased his words and rate of aggression.  He greedily eyed the raw materials, mineral resources and gold and foreign currency reserves in neighboring Czechoslovakia, and proclaimed that there was a "Czechoslovakia problem that had to be rectified." Hitler loved to bluff, but there soon came a day that he removed all restraint.  He openly declared that it was his "staunch desire to wipe Czechoslovakia off the map."  Sound familiar?
Europe feared that an impending war was eminent, yet no one would stand up to Hitler.  Worse yet, no nation came to the aid of Czechoslovakia, who like Israel, was the only true democracy in the region.  While other nations in Europe hemmed and hawed and deferred to England, British Prime Minister Neville Chamberlain (according to the article) sought to appease Germany by fulfilling its wishes, provided they appeared legitimate and were not enforced with violence.  This sounds eerily like the U.N. continuing to give Iran the benefit of the doubt, letting them continue with their threats toward Israel, as long as it's not enforced with violence....YET! 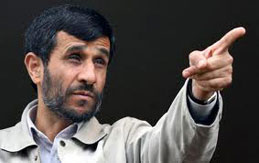 Historians have long debated the reasons why European powers looked the other way; why they continued to appease Hitler when he so demonstrably announced his goals.  And by the way, Hitler found their conciliatory tones contemptible, just as Ahmadinejad views the West as weak.  In WWII, Czechoslovakia was virtually sacrificed for the hopes of a few more months of peace.  But in today's world, and to the consternation of both East and West, Israel will not be the sacrificial lamb.  Therefore, I fear that we are headed down the same road that led us to a World War in the last century.  Our willingness to accept false promises of compromise, our refusal to realize that the Eastern mindset is different than the West's, and our denial (whether intentionally, or not) to acknowledge the extreme hatred for Israel by the powers in the Middle East; all are leading us towards a conflagration beyond our control.
And to continue the comparison, we have Russia, who lurked in the background the last World War, ready to take advantage of the situation.  Both sides courted Russia who, make no mistake, was always looking out for their own interests.  Nothing has changed.  Poland and Czechoslovakia were partitioned and surrendered, just as Western powers ask Israel to hand over portions of their sovereign land today.  What is it going to take for the leaders of the West to wake up and see that we are careening towards a repeat of history?  Why can't they see that concessions and policies of pacification never work when an evil dictator has set his sights on annihilation?
My post may be an oversimplification of the facts at play, but above all else, I want the leaders of the world, both East and West, to realize what is at stake if we continue down this road.  If strict and swift measures are not taken, AND SOON, then the consequences will be beyond anyone's prognostication.  There will be no winners in this War; it will have eternal significance.  World leaders need to heed the lessons of history and not repeat the horrific miscalculations that resulted in WWII.  Is anyone paying attention?

Ezekiel 33:7       "Son of man, I have made you a watchman for the people of Israel; so hear the word I speak and give them warning from me."