Do You Understand The Implications of Unlimited QE3?

For just a moment, I'm going to take my eyes off the pandemonium that currently defines the Middle East, and take a quick look at the economy.  There's not an American alive that should not be aware that Ben Bernancke and the Federal Reserve just implemented QE3.
If you are like me, you instinctively know this is not a good thing, but maybe don't quite understand all the implications.  So I've done some cursory research, and I'd like to share with you what I've learned.  My explanation is two-fold --- to clarify the formal definition and actions of Bernanke and the Fed; and to look behind the curtain and see another possible pretext. 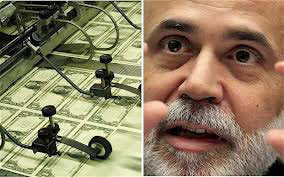 First of all, I learned that Quantitative Easing is a form of monetary policy that central banks use to stimulate the national economy when conventional monetary policy has become ineffective. I think we can all agree that whatever our policy has been, it has been ineffective.  What constitutes monetary policy?  Definition: that is the process by which the monetary authority of a country controls the supply of money, often setting a low interest rate to promote economic growth and stability. The hoped-for goals of this policy would be relatively stable prices and low unemployment.  (So how's that working for us?)  A central bank is a private institution that manages a state's currency, money supply, and interest rates.  In the case of the United States, our central bank is the Federal Reserve.  So far so good?
What I also learned was that Quantitative Easing is considered unconventional.  I think traditional economists would interpret that as meaning "a last ditch effort."  Remember that this part of my explanation is taking the viewpoint that QE is meant to stimulate our economy.  With that in mind, what is involved in Quantitative Easing?  A central bank implements QE by buying financial assets from commercial banks and other private institutions (mortgages, for example) with newly created money (read that to mean "printed money"), in order to inject a pre-determined quantity of money into the economy. (That would be $40 Billion per month under QE3!)  Quantitative Easing is designed to control deflation (an unhealthy decrease in the price of goods), but there is a risk that the policy could become more effective than intended in acting against deflation – leading to higher inflation (a destructive rise in the price of goods), or of not being effective enough if banks do not lend out the additional reserves.  In short, QE involves the Federal Reserve artificially controlling the value of the dollar.  I think it's pretty apparent that in spite of all the maneuvering by the Fed, the strength of the dollar has been mortally damaged.  Instead of allowing our economy to self-correct, the Powers That Be have something much more deceptive in mind.  It's the same old "bait and switch".  Let's watch Bernanke continue to promote "stimulus" to prop up the economy.  While he promises that "indefinite Quantitative Easing" is on the table to ease our pain, the other hand is working to destabilize our economy.  That's the second part of my explanation.
And here's where I proceed to put on my conspiracy hat.  Sorry, folks, but I just don't think we are being told the truth, so my mind always takes me to other motivations.  The most obvious and glaring question to me is this:  if QE1 and QE2 didn't solve our economic woes, the policy isn't working.  So what else could be behind the adoption of QE3? 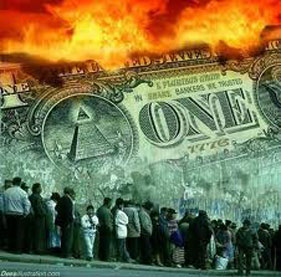 Let me refer you to our old friend, George Soros.  Here is what he said in 2009:  "An orderly decline of the dollar is desirable ... in order to compensate for the fact that the U.S. economy will be a drag on the world economy ...  We need a managed decline."  Let me be plain:  THE GOAL IS TO ACHIEVE GLOBAL ECONOMIC EQUALITY; AS LONG AS THE DOLLAR REMAINS STRONG, THIS GOAL CANNOT BE ACHIEVED.
It all comes back to the One World Order.  In order to level the playing field, there needs to be a global economic collapse, so "They" can manage a reset and redistribute the world's wealth.  The Central Banks of Europe have added $10 Trillion to the balance sheets of their countries.  As I mentioned, the Federal Reserve just added $40 Billion/month to ours with QE3.  It is all unsustainable; that is the plan!  If the dollar can be devalued, America is no longer a great investment for the world.  Until recently, we have been the main obstacle to the idea of a "just order" in the world's economic picture.  We are the fly in the ointment.  And our decline must be "managed".
No one can deny that our dollars buy less.  Since 2008, health insurance costs have risen 23%.  College tuition has increased 25%.  There has been a 46% increase in food stamp recipients.  The saddest statistic of all:  We have dropped in our Global Competition standing from 1st to 7th .... in just 4 short years.
Is Quantitative Easing working?  It depends on your reasons for enacting it.  If you ask us freedom-loving, entrepreneurial, unapologetic Capitalists ..... NO!  But if your goal is to destroy the individual and independent economies of sovereign countries in order to establish a "just and equitable" world economic system, then you are probably applauding.  It looks like you're winning.
But I promise you that I will not go down that road in an accommodating manner.  I will never believe in "the collective".  I embrace a doctrine that those who work hardest, deserve the most reward.  I believe in being a lifeboat to those who are in danger of drowning... until they are able to swim on their own.  God gave each of us the same innate ability to succeed.  It is up to each of us to determine how much we are willing to work to achieve success.   And when you consider that definition of success, you have to ask yourself, what is the Federal Reserve really trying to accomplish?  To me,  it doesn't look as if the Fed is really interested in promoting economic growth.  All their Quantitative Easing policy seems to be accomplishing is the destruction of our currency's purchasing power.  But could it be .... that is their ultimate goal?  Unfortunately, yes!

Psalm 9:15-16        "The nations have fallen into the pit they have dug; their feet are caught in the net they have hidden. The Lord is known by his acts of justice; the wicked are ensnared by the work of their hands."