You know that the elitists and so-called journalists are stooping to new lows when they claim to use Jesus's words to prove their own socialist agendas.  Case in point:  Erika Christakis of Time Magazine wrote an article in which she chastised the faithful for yearning to return to our Christian founding principles, yet failing to recognize that what Jesus was clearly mandating was a higher tax rate.  What?  Did I read that correctly?  Hmmm, Ms. Christakis, methinks you are not much of a Bible scholar.  What did you do..... google "how Jesus treated the poor" and pull a few Bible verses out that you could interpret to fit your progressive mindset?

Let's take a look at how she perverts the Gospel, shall we?  According to Ms. Christakis, Jesus would advocate, at the very least, a 50% tax increase.  How does she get there?  She loosely quotes the following Scripture:  “Anyone who has two shirts should share with the one who has none, and anyone who has food should do the same.”  Problem is, Jesus didn't say this.  John the Baptist did.  She then goes on to assert that Jesus even went as far as promoting a 100% tax rate.  She does this by giving a very imprecise quote of the Sermon on the Mount.  I believe her exact summary was, "If you want to get into heaven, be poor."  She went as far as contending that Jesus's real goal was to get people to "give up all their money for the benefit of others."  I'm assuming she was trying to use the parable of the rich young ruler, in which Jesus instructs the young man to  “Go, sell everything you have and give to the poor, and you will have treasure in heaven. Then come, follow me.”
But this is where Ms. Christakis shows her lack of discernment and true understanding of Scripture.  Either from sheer ignorance of the Bible, or because she is a follower of the heretical Emerging Church doctrine, she totally misses the point!  She is focused on the money; Jesus is focused on the man's eternal life.  He instructed the rich young ruler to rid himself of the obstacle (his wealth) that kept him from trusting in Jesus.   Salvation and Trust were at the heart of Jesus's command; not money and redistribution of wealth. 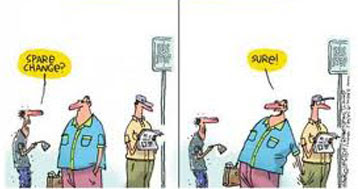 But there is a main point that Ms. Christakis misses and it is this:  Jesus never says it is wrong to be wealthy.  It is what we do with the blessing of money that interests Him.  He never advocates that we give up our wealth to a government entity in the hope that they will apply it to the needs of the poor in the most equitable way possible.  No, what he asks is that we use the money we receive as a blessing to bless others.  We are to help the poor directly.  And that's where she gets it so wrong.  We don't need a government agency telling us to help the poor.  We, through Christian charity, do a much better job than any powers that be.
Whenever misguided ideologues attempt to quote the Bible, it only serves to show just how unlike God and Christ they really are.  They mimic Scripture in a purely out-of-context manner.  If they truly understood the concept behind the teachings, they would comprehend that everything Jesus asks us to do should come from the heart; He wants it to be voluntary and on an individual, personal level --- not because the State mandates it.  Yes, the feeding of the poor is important to Him, but it is the Spiritual needs of man, rather than the physical, that Jesus is most interested in.
People of Ms. Christakis's political persuasion, however, are more interested in judging their fellow man and forcing charity, by taking away from one to give to another.  And it's always someone else who should give more, not they themselves.  So my advice to her would be to study her Bible a little more, and know what Jesus meant when he said, "Give back to Caesar what is Caesar's, and to God what is God's."  Jesus was not making a political statement; He was not concerned with the amount of taxes a citizen paid.  His commandments are above any earthly government.  We are to be mindful of our civic duty, but what we owe the government is inconsequential to what we owe God for the grace He has shown us.  And if our focus is on Him, out of the love of our hearts, we will voluntarily feed the poor and take care of the helpless.   That's a concept that is foreign to those like Ms. Christakis.  But my prayer is that she will come to know the real Jesus of the Bible, not the one that she uses to sell her misinformed doctrine.