Can you feel it?  Is there really a "Values Movement" beginning to sweep across America?  If the Chick Fil-A controversy has done nothing else, it has energized the citizenry to define what they believe in, and then take a stand to protect and defend those beliefs.
I couldn't be prouder of the people who felt strongly about, what I perceived, to be an unfair attack by the media who hoped to stir up the ire of the gay/lesbian populace and thereby bring about an indictment against Christianity and its followers.  This shouldn't have been the major story it has become.  There was no discrimination, no denial of service, and no judgment.  Dan Cathey, the CEO of the company, simply stated that he believes in the Biblical view of marriage.  That was it!  No condemnation if you happened to disagree with him; no vilification of the opposite viewpoint --- he just stated his opinion and the philosophy of his company.  No harm was committed.
But those who wish to see Christianity discredited just couldn't let this golden opportunity fade away.  No, they grabbed hold and twisted and magnified implications that weren't there.  They thought they could show just how hateful and marginalizing we Christians are.  They also thought we would be afraid to show our support for this man or his company; not wishing to be viewed as "homophobic" or an unloving Christian. 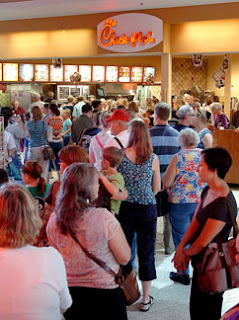 Instead, we showed them all that we Christians are tired of being categorized in an unfavorable light; we are no longer going to sit back and turn the other cheek, neglecting to show our support for the Biblical principles of our faith.   We've been politically correct for too long.  So we showed up this last Wednesday in incredible numbers --- to let Chick Fil-A know that we stand with them, and to show our solidarity with the values of the Bible.  We didn't carry hate-filled signs, we didn't taunt the media or judge our brothers.  We simply bought chicken sandwiches.  And by doing so, we sent a message loud and clear to anyone who wants to disparage our faith:  THERE ARE MORE OF US THAN YOU THINK, AND WE WILL NO LONGER SIT BACK AND WATCH OUR FAITH MOCKED AND SCORNED!
But what the media didn't count on were the thousands of people who also came to Chick Fil-A that day, not because of their religious beliefs, but because of their stance on the First Amendment.  Freedom of Speech was nearly as huge a component of support as Freedom of Religion!  People just didn't like the idea that a business owner could be denied the right to conduct business in Chicago or Boston on the basis that he voiced his religious belief.  That was government overstepping its bounds, and the public was not buying it.

But they did buy chicken nuggets and waffle fries.  Chick Fil-A broke a sales record that day; but they didn't boast by releasing the numbers.  It wasn't the dollars that counted.  In fact, an awful lot of the increased sales went to charity.  What mattered was the hundreds of thousands of people who stood in line in scorching 100 degree-plus weather; it was the cars that waited for over an hour to go through the drive through; it was the courteous wait staff and polite customers who showed what commitment and devotion to their Belief looks like --- all this came together in a peaceful, loving show of solidarity.
Friday was the opportunity for those who felt slighted by the media distortion and misrepresentation of Mr. Cathey's remarks.  Gay rights activists called for a "National Same-Sex Kissing Day", and encouraged gay and lesbian couples to ascend upon Chick Fil-A restaurants for a PDA-fest.  Now, I happen to agree with Gov. Mike Huckabee, who was responsible for the call of support for the maligned restaurant.  Those who wish to participate in the "Kiss-In" had as much right to show up at Chick Fil-A as the supporters did on Wednesday --- as long as they displayed the same politeness and non-confrontational attitude.  Unfortunately, there were at least two incidents that showed the Chick Fil-A protestors were unable to show the tolerance that they demand from others. 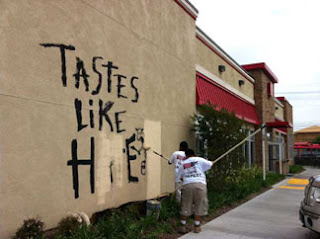 One gentleman, whom I will only identify as Adam, decided to make a video protesting the restaurant, but only succeeded in showing how confrontational and ugly he could be to a young employee.  Instead of calling attention to his point of view in a positive manner, he has only shown a negative light on his "cause."  And then the "hate" grafitti on the side of one store does not win any converts either.   Both sides claim they promote love, but the results of this protest prove that those who claim to be persecuted are the ones who seem to be the angriest and the least understanding.
So maybe this will discourage the media from stepping over the line again.  Surely they have seen the power of a peaceful display of unity; and surely they won't want to risk another exhibition of the multitude who embrace faith-based values.  Alas, I'm afraid this will only embolden them to come against us in an even more overt attempt to limit the scope of Christianity in this country.  But next time, we will be stronger, too, and I pray that our churches and our pastors will stand with us.  There is a spiritual battle waging in our country, and everyone who calls themselves a Christian better know what is at cost, and stand their ground!

Colossians 2:8     "See to it that no one takes you captive through hollow and deceptive philosophy, which depends on human tradition and the elemental spiritual forces of this world rather than on Christ."
Posted by Pam Kohler at 7:00 AM