Our Military Is Facing Threats From Within ... But Is It Being Reported Accurately?

I'm probably going to be excoriated for this blog post, and I want to make it clear that I am in no way condoning the actions of any hate group, whether in the military or the general society.  But I believe what I have witnessed in the last couple of days is another case of Political Correctness run amok.
I'm sure you've seen the headlines over the last few weeks .... there are new concerns over White Supremacists and Neo-Nazis in the U.S. military since Wade Michael Page murdered six innocent people in a Sikh Temple in Oak Creek, Wisconsin at the beginning of the month.  Although he was discharged from the military in 1998 (that's 14 years ago), and was known for his Neo-Nazi connections and affiliations, he has become the new poster boy for what the media would like everyone to think .... our branches of the military are full of white supremacists and skinheads who are preparing to wage a racial holy war. 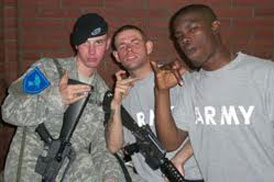 Reuters, an international news agency out of London, wrote a pretty condemning article this week, titled U.S. Military Battling White Supremacists, Neo-Nazis In Its Own Ranks.  To hear them tell it, every military veteran who sports a Confederate Flag or barbed wire as a tattoo, is a potential right wing extremist, and a threat to national security.  But when you actually analyze the article, they provide very little data to substantiate their bold claim.  In fact, the few instances they site are more than 10 years old.  And to quote the article, "No one knows how many white supremacists have served since then. A 2008 report commissioned by the Justice Department found half of all right-wing extremists in the United States had military experience." (My emphasis).  In addition, a spokesman for Fort Bragg, Colonel Kevin Arata, stated "We don't really think this is a huge problem, at Bragg, and across the Army.  In my 26 years in the Army, I've never seen it."  Now, I find that a little naive, and I am in no way, saying that White Supremacists don't exist in the military.  My complaint is that they used a military veteran like Page to support a shoddy argument and push their own opinion and agenda.
So why the rush to paint a broad brush across all the military?  Because you have some Neo-Nazi nutcase, who happened to serve in the military over a decade ago?  For their evidence of White Supremacists, they use Timothy McVey (1995), and a member of the Hammerskin Nation, a skinhead group, who served from 1988-1991.  This same vet, T.J. Leyden, has since renounced the white power movement and works to eradicate it.
So, pardon me, if I'm just a little suspicious.  After reading this article that was heavily promoted in other media outlets, I'm questioning the accuracy of the report and the motives.  Are they trying to create a bigger problem than really exists?   They go out of their way to state that the Pentagon has "launched three major pushes in recent decades to crack down on racist extremists."  Yet, the only racists they mention are White racists.
Why didn't they cite the report, Gang Activity in the U.S. Armed Forces Increasing, dated January 12, 2010?  That certainly has more relevance than reporting on white supremacists that served nearly 14-20 years ago!  A much more verifiable article was written, quoting FBI statistics on gang-related activities by virtually every street gang in the country, and on multiple military installations over the last few years.  This report names them all, including the Bloods, Crips, Black Disciples, Gangster Disciples, Hells Angels, Latin Kings, The 18th Street Gang, Mara Salvatrucha (MS-13), Mexican Mafia, Nortenos, Surenos, Vice Lords, and various white supremacist groups.  Yet, Reuters chooses to focus on only one threat ... White Supremacists. 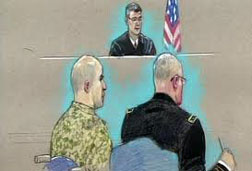 And of course, there is no mention, ever, of Muslim extremists in the military.  Why that would be "Islamophobic"!  Oh, I forgot ..... Nidal Hasan was just a disgruntled employee!  Another article I read reported that the FBI is investigating over 100 suspected Islamic jihadists in the U.S. Military.  And the article goes on to state that "Since 2001, law enforcement officials have foiled and prosecuted more than 30 plots or attacks against military targets within the United States." --- all by Islamic jihadists.
With all this information out there, I just find it odd that the Southern Poverty Law Center and the Anti-Defamation League (ADL), another civil rights monitor, seem to only want to point out that the military is ignoring the White Supremacist groups.  Like I said at the beginning of this post, there is no room for any hate group in the military, or anywhere in society.  Are there extremists in the military? Yes.  Does racism still exist in this country?  Unfortunately, yes.  It has existed from the beginning of time, and I'm afraid it will continue to exist until Jesus sets foot on the Mount of Olives.  I'm not making excuses for any particular race, religion, or ethnicity -- anywhere racism exists, it lessens our humanity.  But I guess I'm just getting a little tired of the PC attitude in the media.  I think we can all agree that racism is wrong .... but that includes ALL racism.  Let's be honest with the facts and shine the light of Truth in all the corners.  Electing to point the finger at one group, while avoiding the mention of others, serves only to keep all of us in the dark.

Psalm 101:4      "I hate what faithless people do; I will have no part in it.  The perverse of heart shall be far from me; I will have nothing to do with what is evil."