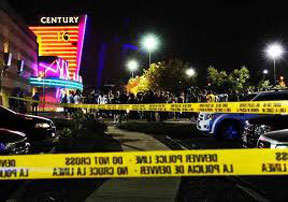 As I sit writing this post, it has been less than 24 hours since the senseless killings in Aurora, CO.  I've listened to the endless news commentary, until I can take it no longer.  They seem to be less interested in mourning the loss of innocent lives, than they are in recounting the minute details of "death by shooting."  And I am appalled at the lack of professional journalistic standards in the reporting of this tragedy.
There are over 30 men in the Denver area with the same name as the monster who perpetrated this act.  Yet major news sources incorrectly identified several of these men as "possible" suspects, even going as far as posting on their Facebook pages.  ABC News reporter Brian Ross was especially despicable for mis-identifying one gentleman who happened to be a member of a Colorado Tea Party as  a viable candidate for the shooter.  His ill-disguised attempt at maligning the Tea Party was almost laughable, if the contempt and his motive weren't so obvious.
And of course, the coming days will find all news sources jumping on the "gun control" bandwagon.  It's the same old argument they trot out every time a criminal chooses a gun to inflict his insanity upon the populace.  Yes, I wish this person had not used a gun to commit murder, but it is my understanding that the theater in which he chose his victims, was a "gun-free zone"; no guns allowed.  So that particular gun law didn't stop him, did it?  And it's hard for me to understand how so many people can claim that stricter gun laws would stop this kind of senseless killing.  If just one person in that theater had been carrying concealed, there's a good chance that the victim count would have been far less than the current 70.  I'm not saying that a law-abiding, and armed citizen could have prevented this massacre, but I guarantee you that the shooter would not have found such easy targets if someone had been shooting back.
And of course, guns become the quick and easy answer to why this tragedy happened.  This event will  become the "poster child" for anti-gun legislation; celebrities and politicians are already swarming the air waves with their tired rhetoric and inflammatory opinions.  But I have a question for them all:  why is no one looking at the extreme violence that the movie "Dark Knight Rises" promotes?  The Batman series of movies have become increasingly disturbing; each successive movie ramping up the sadistic brutality.   Film directors seem to be blurring the boundaries between reality and cinema, and the video games that consume our youth are becoming more and more realistic.  In the 1960's Batman TV show, the Joker was a sinister, but cartoon-like villain.  But in the latest carnation, the Joker is all too real; a cruel, sadistic, perverted human being.  (In the last Batman movie, The Dark Knight, actor Heath Ledger, who played the role of The Joker, was allegedly so disturbed by the darkness of his character that some speculate it contributed to his death). 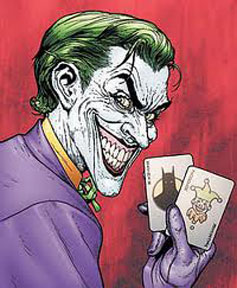 Does anyone besides me see the connection between characters in these movies (and games) wearing masks and disguises, and the murderer in Colorado appearing in a gas mask and costume, and calling himself "The Joker", one of the characters in the movie?  Our culture is conditioning our children to hide behind a veil of anonymity; to become a "character" and thereby giving themselves the freedom to experience their savage and barbaric selves without feeling any responsibility as a human being.  As The Joker stated in an earlier movie in the series,  "Guns are too quick. You can't savour all the little emotions."   Here Hollywood gives our kids a character that encourages them to "savour" what it's like to harm another person.  But he's not real, so they, too, can conceal their identities behind a mask and act out their aggression.  And what's even more despicable is that Hollywood makes heroes out of these characters, and fans are wearing tattoos of their favorite villains.  What's next?  I shudder to think where all this gratuitous savagery leads the masses.  And believe me, they will follow.
Here's another disturbing thought: in the ever-increasing quest for profit, film-makers and studios are lowering the age limits for these sadistic movies; even to the point of encouraging parent-and-child screenings.  Perhaps that explains why some of the victims in Colorado were ages 6, 3 and 3 months at a midnight showing.   And that disturbs me beyond belief.  But the bottom line is that 12 people lost their lives in the early hours of Friday morning and many families are grieving today.  We must not forget them.
So while I try to listen for God's voice in the midst of this adversity; and the world tries to make this murder fit its agenda, Evil scores another victory.  There is a spiritual battle being waged for our souls, and the Deceiver is winning converts.  He is able to convince the unsuspecting that there is nothing wrong with embracing violence as entertainment.  And from there, it's one tiny step to pretending that you, too, could "savour all the little emotions", and no one would know.   It's easy; just hide behind the mask.


Postscript:  Several hours after writing this post, I saw an interview with Chris Ramos, one of the eyewitnesses to this tragedy.  Mr. Ramos stated, "No one teaches you what to do in these kinds of situations; no one tells you how to survive this."  I must respectively disagree with Mr. Ramos.  I have been taught operational security and how to go to cover when approached by an assailant.  I have been trained how to operate my concealed weapon and give myself the best chance to survive.  So while I may not be able to avoid a situation in a crowded theater, I would not ever let myself be defenseless.


Ephesians 5:15-17     "Be very careful, then, how you live —not as unwise but as wise, making the most of every opportunity, because the days are evil.  Therefore do not be foolish, but understand what the Lord’s will is."
Posted by Pam Kohler at 7:00 AM