History of Freemasonry and How It Is Affecting the U.S. 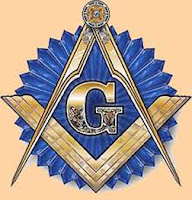 I'm sure you're wondering ..... "How did Belle decide to write on this topic?" and "Why should I be concerned?"  First of all, if you are like me, my first impression of Masons and Freemasonry is of men riding around in funny little cars with funny little hats.  They are involved with fund-raising for Children's Hospitals, right?  Well, that was the full extent of what I knew about Masons.  Then a few weeks ago, I heard an astonishing podcast on the real significance of Masonic lodges and their rituals.  What I subsequently uncovered through further research, turned my blood cold.  Freemasonry has attempted to co-op Christianity and lay claim to the very foundations of our nation.  It is for this reason, that I have decided to tackle this difficult subject.
Let me begin by saying this post will barely touch the surface of Freemasonry.  I would refer you to an in-depth article if you want to go deeper.  I have cross-referenced this article with several others and then did my own on-site research, and you will be shown the physical evidence as you read further.
History of Freemasonry.   For a period of 700 years (900 A.D. to 1600 A.D.), England went through a period of cathedral building. Masons (men in construction trades who specialized in brick or stone) formed guilds or craft organizations for self protection. In current terminology we would call them "unions." At that time, structures called "lodges" were used by workers as shelter. Later this became the basic unit of Freemasonry. It is for this reason that most symbols are founded on the tools and practices of the building profession.  Their rituals are mostly occult, with building trade rituals mixed in. These stonemasons were called "free masons" because they were not indentured servants which local guild masons were at the time.  Before the Enlightenment years masons were Christian, and their history is tied to the Knights Templar.  The two groups share many of the same rituals and beliefs. 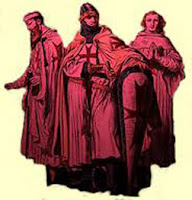 The Knights Templars were initially established to protect Christian pilgrims en route to the Holy Land.  The Templars reached the zenith of their might in the 13th century, when they wielded great power both in the Holy Land and in Europe. But when the Holy Lands fell back into Muslim hands in 1291, the Templars lost their apparent reason for existence.  There is so much lore about the Knights Templar that it is hard to know what to believe.  But what is known is that many Templars gathered great wealth in the Holy Land and they became powerful in Europe.  Perhaps too powerful and too overconfident of their status.  The King of France had most of the Templars rounded up, tortured and executed.  The Order of the Temple was officially dissolved by the Pope in 1312.  And perhaps this is where the Templars and Masons got so far off track.  Masons probably deny their ties with the Knights Templars because the last Grand Wizard (Jacques de Molay) of the Knights Templars denied Christ in front of both Pope Clement and the King of France.  And it gets worse than this.
Masons all deny Christ as being part of the Trinity.  In fact, they have their own system of "gods" they worship.  They worship all the gods of the Ancient Mysteries, and believe that God has simply taken many names, including: Marduk, Amon-Re, Osiris, Krishna, Demeter, Yahweh and Allah. In many lodges the holy name of Jesus is not allowed to be spoken.  Praying to Jesus, or ending a prayer in the name of Jesus is an "offense" big enough to get a lodge closed.
So what does all this have to do with America, and why should you care? We are a nation that allows freedom of religion, right?  So why should we be concerned with these benign groups of men with a long, heralded history?  After all, members of the Masons had a hand in the founding of our country.  George Washington, Henry Knox, Benjamin Franklin, John Hancock and Paul Revere were all members of Masonic lodges.  What you need to understand is this:  most members of lodges never rise far enough in the ranks to know what this Society actually stands for.  (Washington actually left writings that clearly stated he was not an active member of any lodge.)  But this much is clear:  from the beginning of the 18th century onwards the basic Freemasonry was stripped of the direct Christian elements, and that is what makes it significant to today.
The Secrets of Masonry.   As a Mason you will be led into believing there is useful knowledge to be learned in Masonry.   At each new level you attain, you will be allowed to know more of the "Secrets".  This so-called "knowledge" is costly, and very time consuming -- away from your family. It is the lure of curiosity and nothing more that will be satisfied by Masonry. You will be made to "swear" things and take "solemn oaths"; and in doing so, to act against your conscience as both a Christian and an American.  At the heart of Masonry is a secret Luciferian doctrine which a Mason only comes to understand as he reaches the higher levels.   New candidates are falsely taught that the beginnings of Freemasonry are lost in the "mists of time".   That's convenient, isn't it?
There is so much more that I could tell you, but I want to get to the heart of this post, and why I felt compelled to write it.  It is because almost all of our seats of governments have been built by Freemasons, and they have laid claim to the very cornerstones of every county courthouse in the land.  Why should this concern you?  It is because Masons say they offer new candidates "the light". The light they are actually giving is: Lucifer. The Christian Bible says that Satan walks to and fro on this earth masquerading as an "angel of light", that many might be deceived. 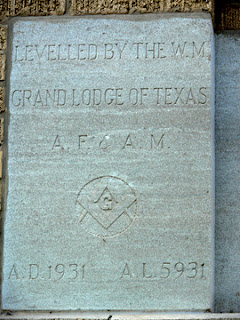 Many of the inscriptions on our buildings and monuments record the date they were built as A.D., which stands for Anno Domini; or "in the year of our Lord."   Many (not all) of the cornerstones placed by the Masons also list A.L., which stands for Anno Lucis; or "year of Light (Lucifer)."  The Masons have their own Luciferian based calendar, which begins 4000 years before Christ was born, when they believe Lucifer was thrown out of heaven.  So imagine my surprise when I examined my county courthouse and found the A.L. date listed!  While the cornerstone dates the building at A.D. 1931, the Masons date it as A.L. 5931; this is 1,931 years since Christ plus the 4000 years since Lucifer gained his power.  And then on our little road trip to Colorado this past week, we stopped at various courthouses and also found that most of them listed both "the year of our Lord" and "the year of Lucifer" as the date that the cornerstone was placed!
So now do you see the significance?  The seats of government in our land have been claimed for Lucifer!  This makes me want to examine every cornerstone on every courthouse, monument and memorial in the land.  What does the Washington Monument in Washington D.C. say?  The White House?  Is it no wonder that our country seems to be sliding into a bottomless pit of moral decay and corruption?
I fully expect this post to be controversial and declared both inconsequential and inaccurate.  But if anyone can explain to me a different significance of A.L. 5931, I'll be glad to listen.  And if you can't, then you have no basis for discounting the history or the implications.  As outlandish as all this seems, it doesn't even surprise me when I look at the state of the world.  Evil has infiltrated the infrastructure of our society, and God's principles are under assault.  Be aware ..... be very aware!

2 Timothy 2:19        " Nevertheless, God’s solid foundation stands firm, sealed with this inscription: “The Lord knows those who are his,” and, “Everyone who confesses the name of the Lord must turn away from wickedness."
Posted by Pam Kohler at 7:00 AM