What Do Tanks In The Streets of St. Louis and the Insurrection Act of 1807 Have in Common? 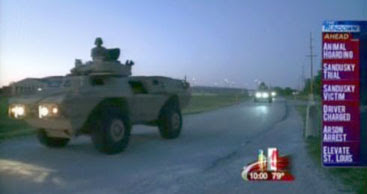 When I first saw the article announcing that U.S. Army troops from Maryland were conducting "urban training exercises" on the streets of St. Louis, Missouri, I was shocked!  All kinds of scenarios popped into my head:  Is it setting up a false flag for the November elections?  Is it to slowly desensitize us to seeing troops in the streets?  Since when are our military bases not suited to conduct training? Does the Government fear riots come election time, and this is a pre-warning?
As I looked into this incident further, I gained some more insight.  The area in St. Louis where the "exercises" were being conducted is a high crime area, and St. Louis has a history of being a hotbed for civil unrest.  I grew up in the St. Louis area, and as a child, I can remember when Martin Luther King was assassinated, there was real fear that the city would burn.  Perhaps this is a show of power for any other city who might experience forms of social upheaval?  Or a signal to the nation that dissent will not be tolerated?
But then that led me to Posse Comitatus, a term that is at the forefront of every freedom-lover's vocabulary.  The Posse Comitatus Act was passed in 1876 and its purpose was to act in concert with the Insurrection Act of 1807 to limit the powers of local governments and law enforcement agencies in using federal military personnel to enforce the laws of the land.  The Insurrection Act of 1807 is the set of laws that govern the US President's ability to deploy troops within the United States to put down lawlessness, insurrection and rebellion.  The general aim is to limit Presidential power as much as possible, relying on state and local governments for initial response in the event of insurrection.  Therefore, when the Insurrection Act of 1807 is coupled with the Posse Comitatus Act, Presidential powers for law enforcement are limited and delayed.
Since I am not a legal scholar and don't pretend to know all the legal ramifications of these Acts of Congress, my understanding is on a much simpler level.  It's my humble opinion that what these Acts attempt to do is limit the power of the President or the Federal Government to use military power against the citizens.
What further investigation revealed was actually quite astounding.  I don't want to bore you with a lot of tedious facts, but this condensed explanation should broaden your understanding.
In 2006 Congress modified the Insurrection Act as part of the 2007 Defense Authorization Bill.  Section 1076 of the law changed the Insurrection Act and widened the President's ability to deploy troops within the United States to enforce the laws.  This flow-chart shows how these changes gave considerably more discretion to the President. 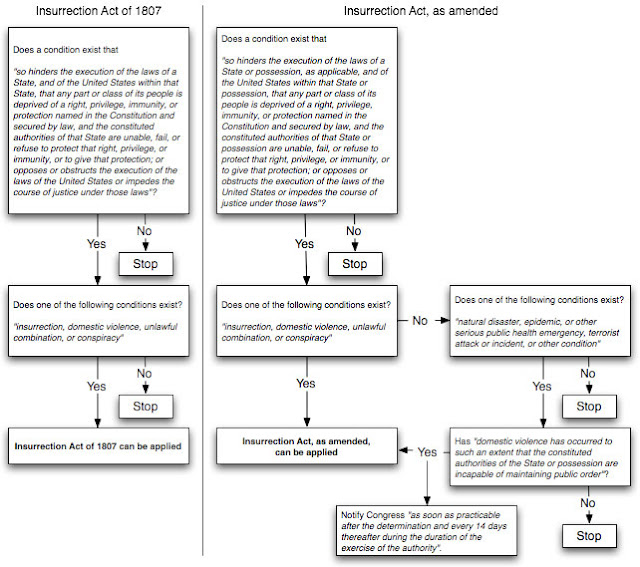 Fortunately for us, On February 7, 2007, Sen. Patrick Leahy (D-VT) and Sen. Kit Bond (R-MO) introduced legislation that would revert the Insurrection Act to its previous state.   Sen. Leahy argued that the modifications to the law make it "unnecessarily easy" to assert federal authority over national guard elements without the consent of governors, and that the changes removed a "useful friction" that existed between the Insurrection Act and the Posse Comitatus Act.
In perhaps a prophetic statement, Senator Leahy remarked on September 19, 2006, "we certainly do not need to make it easier for Presidents to declare martial law. Invoking the Insurrection Act and using the military for law enforcement activities goes against some of the central tenets of our democracy. It creates needless tension among the various levels of government – one can easily envision governors and mayors in charge of an emergency having to constantly look over their shoulders while someone who has never visited their communities gives the orders."
The amended changes to the Insurrection Act were repealed in 2008.  Yet that doesn't seem to have dampened the efforts to introduce the possibility of military forces in our urban streets.  Did the Governor of Missouri invite the Federal Government to conduct these exercises?  And if so, under what auspices?  And if the State did not ask for assistance, why is the Federal Government exerting a show of force that is un-Constitutional?
I am far from being able to predict what all this means, but I'm perceptive enough to know this is unprecedented and unwarranted.  It means something!  I just pray that it's not what I think.

1 Peter 5:8       "Be alert and of sober mind. Your enemy the devil prowls around like a roaring lion looking for someone to devour."
Posted by Pam Kohler at 7:00 AM