Faith in God Is Dishonored in Our Military

When I made my trip a few months ago to Fort Sam Houston to minister to our Wounded Warriors, our group spent a lovely morning with two Army chaplains.  They held an honest and frank discussion with us regarding their faith and serving in the military.
They lamented the fact that they were being asked to compromise their faith and their values for "political correctness".  With the repeal of "Don't Ask, Don't Tell", they are now required to counsel gay service members, without being able to state their religious beliefs.  It is not the counseling that they protest, it is the inability to express their faith.  In addition, Christian values are being suppressed in favor of promoting Muslim ideology.  Christian symbols are being taken down from chapels because the Military doesn't want to "offend" anyone.  These faithful and devoted men of God know that their time in the military is short.  There will soon come a day when they must stand for their faith and can compromise no longer. 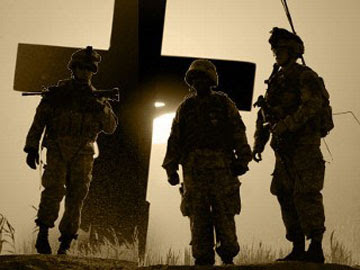 And lately there is more evidence.  Several dozen Republican House members have sent a letter to Defense Secretary Leon Panetta accusing the Air Force of creating a “culture that is hostile toward religion.”  Among the incidents cited in the letter:   a decision to change a Latin office motto to remove reference to God; no longer requiring staff to check for Bibles in Air Force Inn rooms; and suspending an ethics course because the material included Bible passages.
The Air Force's response?  “Airmen are 'free to exercise their Constitutional right to practice their religion — in a manner that is respectful of other individuals’ rights to follow their own belief systems.'" Unfortunately, there are far too many outside groups that are eager to claim that the mere presence of a Cross in a Chapel is not "respectful" to another religion.  And it seems pretty plain to me that military personnel are to exhibit "respect" to all religions, except Christianity.
Furthermore, the White House has made strong objections to H.R. 4310, which would protect military chaplains who refuse to perform same-sex marriages because it violates their religious beliefs.  Apparently, everyone else is allowed to follow their belief systems, except Christians.  Whether you agree with same-sex marriage or not, no chaplain should be forced to perform any ceremony against his beliefs, regardless of his faith.
Then there is the Military Religious Freedom Foundation (MRRF) which calls military-themed Bibles a "threat to national security."  While claiming to advocate "diversity" for all religions in the military, the group seems only to have targeted Christian applications in the armed forces.  Under "Accomplishments" on their website, the atheist group cites the removal of the "Crusader" cross from an Army Hospital's emblem; the removal of Christian inscriptions from Trijicon rifle scopes; the removal of "Left Behind" video games from active-duty recreation areas;  raising awareness and criticism of Billy Graham-sponsored "Rock the Fort" Christian concerts on various Army posts; and numerous Nobel Peace prize nominations (that should tell you something).
Other groups, such as the Military Association of Atheists and Freethinkers (MAAF) should give you a pretty good idea that Christianity in our military is under assault.  It seems to me that rather than making a move to create a non-discriminatory environment, the Military is going out of their way to bow to the demands of these atheist groups.
I shudder to think of our Armed Forces devoid of God.  His "Divine Protection" has been a force in our military since the first ragamuffin patriots took the field at Bunker Hill.  I guess those groups who think He is "offensive" have forgotten that age-old truth .... There are no atheists in foxholes.


Numbers 10:9     "When you go into battle in your own land against an enemy who is oppressing you, sound a blast on the trumpets. Then you will be remembered by the LORD your God and rescued from your enemies."