A Shout Out To Florida Governor 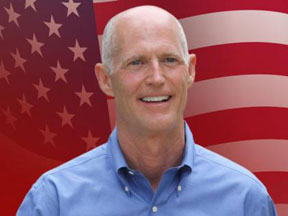 I want to publicly congratulate Florida Governor Rick Scott for his wise, and Constitutionally-correct decision last week to uphold the Second Amendment.
Tampa Mayor Bob Buckhorn expressed concern over the possibility of violent anti-government protest (and various forms of civil unrest) during this summer's Republican National Convention in his city.  He asked Governor Scott to issue an Executive Order that would temporarily override state laws allowing people with concealed weapons permits to transport firearms downtown.
Governor Scott's reply was immediate and firm:   “It is unclear how disarming law-abiding citizens would better protect them from the dangers and threats posed by those who would flout the law.  It is at just such times that the constitutional right to self-defense is most precious and must be protected from government overreach,” Scott wrote. “I am confident the many federal, state and local law enforcement agencies focused on the RNC will fully protect Floridians and visitors, without the need to resort to sweeping infringements on our most sacred constitutional traditions.”
Mayor Buckhorn's response was perplexing: ".... to be clear, I am far less concerned with those who have concealed weapons permits than the ones who may somehow acquire a weapon and use it to create mayhem …"  So let me see --- if you think the law-abiding citizens with concealed carry permits are going to be less of a problem than those who are intent on creating mayhem..... umm, shouldn't you be asking the Governor to help you provide a check on those who aren't obeying the law?
And there have been no reports that the violence of the May Day Occupiers were perpetrated by CCL holders.  I'm sure the presence of anarchists and Occupiers will be felt at the Convention.  Is the Mayor interested in curtailing their First Amendment rights?  An "Event Zone" that prohibits lumber, hammers, hatchets, and chains --- favorite "weapons" of the violent fringe of the Occupy movement --- is an effort to allow Free Speech and prevent chaos and disorder.  The very need for such a "Zone" makes me more nervous than allowing law-abiding citizens to protect themselves from "Zone" protestors. 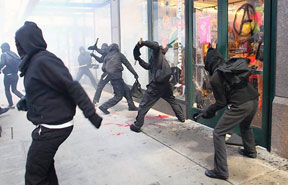 Then there is the comment by Dennis Henigan, vice president of the Brady Campaign to Prevent Gun Violence, “This kind of debate outside a national convention should be done without the intimidating presence of guns."  What Mr. Henigan and Mayor Buckhorn fail to realize is that it is not the intention of those with CCL permits to intimidate, threaten, or "create mayhem".  In fact, you would be hard pressed to identify who was carrying and who wasn't.  It is their intent to AVOID using their weapon.  It is only employed when it is needed to protect their life or that of their loved ones.
Can these two gentlemen say that anyone found carrying a hammer, hatchet or chain has the same intent?  Why would you even have those items, if you were not contemplating using them?  The violence that was a part of the Seattle May Day protest was caused by thrown bottles and incendiary devices; what I would definitely consider "deadly weapons".  Yet there was not one report of any damage, death or injury caused by a CCL holder.
I guess I would like to ask those who are using the RNC as an excuse to attack the Second Amendment, Where is your proof?  Can you cite any evidence where another convention, or big event, or a protest broke out in violence caused by a group of CCL permit holders?  As a culture, we seem to be hell-bent on protecting the First Amendment rights of citizens, while interfering with our Second Amendment rights.
I can't express my overall philosophy any better than Governor Scott's closing statement in his letter to Mayor Buckhorn.  So I'll let him give voice to my final thoughts:  "We have had political conventions in this country since the dawn of the Republic.  They are an essential means of furthering our constitutional rights to free speech and to vote.  Our fundamental right to keep and bear arms has coexisted with those freedoms just as long, and I see no reason to depart from that tradition this year."     Well said, Governor!