Just A Spoonful of Sugar Makes The Medicine Go Down

Thanks to CZ, a faithful reader, for suggesting this post topic.  She sent me a link to an article about a major city in our state, (and the Southwest) that is implementing a Radio Frequency Identification (RFID) system on two of their Independent School District campuses.  Granted, the program is being instituted on a trial basis ..... for the time being.  But news sources report that if deemed successful, it could eventually include all 112 of its schools and all of its nearly 100,000 students. 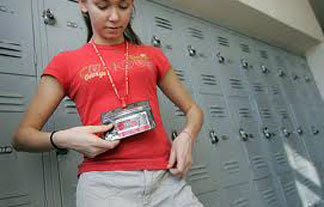 So just what is an RFID system and what does it accomplish?             Among other things, it is a wireless non-contact system that uses radio-frequency electromagnetic fields to transfer data from a tag attached to an object, (in this case the Student ID Card) for the purposes of automatic identification and tracking. Some tags require no battery and are powered by the electromagnetic fields used to read them. Others use a local power source and emit radio waves (electromagnetic radiation at radio frequencies). The tag contains electronically stored information which can be read from up to several yards away. Unlike a bar code, the tag does not need to be within line of sight of the reader and may be embedded in the tracked object.
Of course, the powers-that-be trot out all the usual benefits of such a program;  it will increase the safety for students, allowing them to be located at all times; at a cost of $15 per ID card, it would bring in much needed revenue to the educational system, offsetting cuts in state funding.   But that didn't add up, and this is what I couldn't understand ---- if the school district is suffering from spending cuts, then how are they affording the $525,065 to implement the pilot program and $136,005 per year to run it?  All I had to do was read between the lines, and there it was --- buried within a paragraph of the article.   Now I get it!  According to the School District's Assistant Superintendent for Budget and Finance, if successful, the school district would get $1.7 million next year from both higher attendance and Medicaid reimbursements for busing special education students.  The FEDERAL GOVERNMENT would pay for it, and ultimately control it.
Furthermore, it was explained, the payoff could be a lot bigger if the program goes districtwide.  This official said the program was one way the growing district could respond to the State Legislature's cuts in state education funding.  So, let me see if I understand this correctly ---  if the State won't give us the funds we want, then we'll just sacrifice a little of our students' freedoms and implement this small pilot program and get our funding from the Feds.  So it's a financial decision!  And obviously worth the trade-off!  Never mind the fact that our entire educational system has failed to properly educate our kids over the last few decades, and they don't deserve their overblown budgets!
They also cite the fact that "national school safety experts" (whoever they might be!) compare the RFID chips to nothing more sinister than security cameras.  They attempt to further mollify privacy concerns by blithely commenting that it is just a pilot program, and not permanent.
And you wouldn't believe the number of parents who fell for this nonsense!  Don't they see that we are incrementally losing our freedoms?  Security cameras were once going to be a pilot program, too --- and used exclusively to capture the "bad guys".  Remember that?  Now they are everywhere, and are an intrusion upon our privacy, notwithstanding all their nefarious uses. 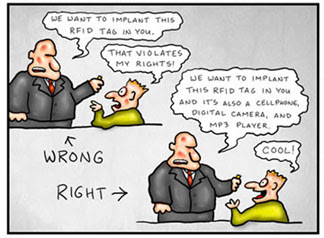 One school district spokesman summed it up neatly, "“We want to harness the power of (the) technology to make schools safer, know where our students are all the time in a school, and increase revenues.”  That about covers all the bases --- introduce technology that will lull the sheeple into a false sense of security; use it to gain more private information on individuals; and justify it all in terms of money.
What I want to know is this --- what happened to the days when teachers had enough authority and influence to motivate students to be in their seats in the classroom, where they were supposed to be?  Now we need "technology" (translation: some person sitting at a computer tracking our children) to be assured that our children are getting the education we send them to school for???
One school board trustee actually had a brain cell working, and voiced her concerns over whether the administration would soon be tracking the teachers' every move.  That's what these people don't understand.  It doesn't stop with just making sure a student hasn't skipped out on Second Period Math.  If they can start out small, and gradually implement it, then before you know it, all of society will fall into step and accept it as part of our everyday life.
Fortunately, this is one matter where the ACLU and I agree.  They were able to successfully cancel a similar program in California, citing not only privacy issues, but the risks of identity theft or kidnapping if somebody hacks into the system.  And if that doesn't convince the ill-informed parents, this should:  a State Education Agency spokeswoman stated that no state law or policy regulates the use of such devices.  How's that for checks and balances?
And finally, these additional little tidbits about RFID chips made the hair stand up on the back of my neck .... An RFID tag attached to an automobile during production can be used to track its progress through the assembly line (and who is responsible for turning that chip off?).  Pharmaceuticals can be tracked through warehouses (and records kept on your personal medical information).  Livestock and pets may have tags injected, allowing positive identification of the animal (and further tracking of the pet's owner).  RFID identity cards can give employees access to locked areas of a building (and anyone with harmful motives); and RF transponders mounted in automobiles can be used to bill motorists for access to toll roads or parking. How many of us have these innocuous toll road tags on our cars?  Do you really think that's all those little chips are good for?   Since RFID tags can be attached to clothing, possessions, or even implanted within people, the possibility of reading personally-linked information without consent grows increasingly conceivable.  I even watched a recent television series where an isotope was added to the pitcher of cream at a local coffee shop, allowing government officials to track everyone who decided to add a dollop to their morning cup of joe.  Think it sounds too far-fetched?  Be honest.  Do you, really?
I'm sure that most parents signed the consent form that was sent home with their child.  The Nanny State was once again stepping in to take care of their children, because the parents and the teachers were not capable.  It's almost laughable, how easily we give up our rights.  Almost.  But how long before we are all just a blip on someone's computer screen?

Proverbs 2:11     "Discretion will protect you, and understanding will guard you."