I was hoping that I wouldn't have to write this post.  And before I'm labeled a stuffy conservative, who can't understand the passion of youth, let me say that I've been known to do a little screaming, fist-pumping and spontaneous rejoicing when my favorite sports team wins.
But I was appalled and disappointed in the behavior of the University of Kentucky students after their win in the NCAA Final Four over rival Louisville.  State rivalries have occurred for over 100 years, and the enthusiasm and energy of the fans is understandable.  But since when is the burning of over 50 couches, at least one car, and garbage in the streets an acceptable form of fan spirit? 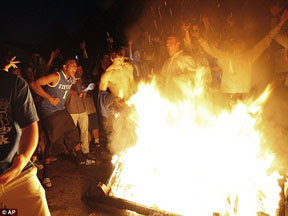 "We are the best team in America.  I think houses should burn."  That was a statement given the Louisville Courier-Journal by one jubilant Lexington, Kentucky resident.  Where does that mindset come from?  What gives these "kids" the right to destroy property that doesn't belong to them?
I rightfully call them "kids", because that's what they are by definition:  a child, a minor, a juvenile.  They are far from showing adult characteristics.  Unfortunately, the whole student body of UK now has a black eye from the antics of these immature, self-absorbed and uncaring students.
And I was hoping for better after the Final Game.  No luck.  After the University of Kentucky's win over Kansas, the mayhem escalated.  Cars crashing into restaurants; more fires being set; fights that involved both fists and guns.  Guns?!?!  Over a sports game?   This will be one more example the anti-gun protestors will use to support their argument.  But the gun didn't cause the incident --- don't you think alcohol, the inability to govern your mouth, and uncontrollable actions precipitated the event?  Any responsible gun-owner knows when it is appropriate to brandish, yet alone use a weapon.  None of these people showed any responsibility or common sense.
This generation is not the first to get caught up in the fervor of cross-state rivalries.  They are a memorable part of any college student's experience.  But when did a heavy police presence become the norm?  When did it become standard (and necessary!) to use pepper spray for crowd control?
And what's even more disturbing to me than these antics?  (No!  "Antics" is too mild; I'm going to call it what it is:  Dangerous and Criminal!)  It's that the participants see nothing wrong in what they've done, nor have they given any thought to what it will cost those who have been harmed.
Did they think about what it will cost the people whose cars were overturned and demolished?  Did they consider the cost to the restaurants and storefronts that must clean up the mess and suffer a loss of business?  No, of course not!  And if they are expelled from the University, Mommy and Daddy will be on the steps of the University complaining that their child was mistreated.
And that's the problem with this culture.  No one is held accountable; the mob rules.  Give me the days when it was a "Leave It To Beaver" world; when Ward and June taught their sons what it meant to respect another person, and that there were consequences to their bad actions.   Somewhere along the way we quit being the Cleavers and became the Simpsons.  And while none of us ever lived up to the squeaky clean values of the Cleaver family, they were role models that we aspired to.
Now, values seem to be a thing of the past.  In this country, Winning gives you the right to destroy.  These are the kinds of demonstrations we've recently seen in countries that are fighting for their freedoms.  This was only a basketball game!  Where does it escalate from here?  I shudder to think.

Matthew 7:13       "Enter through the narrow gate. For wide is the gate and broad is the road that leads to destruction, and many enter through it."
Posted by Pam Kohler at 7:00 AM