Our Constitutional Lessons Being Played Out In Real Time!

I couldn't have asked for a better series of developments!  As I'm progressing through Hillsdale College's online lecture series on the Constitution, lo and behold, we have a real-life Constitutional battle right before our eyes.  The very relevancy of the Constitution is at stake, and we are seeing the Executive branch attempting to intimidate the Judicial branch.
This past week we have seen the President make disturbing comments in regard to the Supreme Court hearing a particular mandate of the Affordable Care Act.  On Monday President Obama said "for years we've heard the biggest problem on the bench was judicial activism or a lack of judicial restraint, that an unelected group of people would somehow overturn a duly constituted and passed law.....I'm pretty confident that this court will recognize that and not take that step." 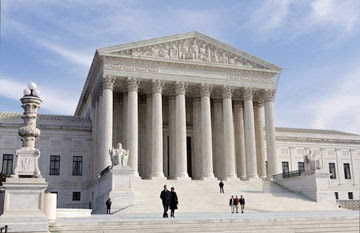 Last November, the president said of this court case, “if the Supreme Court follows existing precedent, existing law, it should be upheld without a problem. If the Supreme Court does not follow existing law and precedent, then we’ll have to manage that when it happens.”
Federal Judge Jerry Smith, who is hearing a healthcare case at a court in Houston, demanded the justice department write a "three-page letter" affirming the supremacy of the courts in deciding the constitutionality of the legislation.
This conflict will be played out in the days and months to come, and we will ultimately find out just how strong our Constitution is.  And since Progressives like to spout that the Constitution is outdated and is no longer appropriate for governing our nation, let's take a look at what the Founders would have thought.
As it turns out, they anticipated just such a struggle when they formed our institutions of government. They spelled out the Separation of Powers clause which would help ensure "good" government at the same time it guarded against tyranny.  They had first-hand experience in resisting the regime of King George III who violated the rights of the people.  In setting up our government, they purposely designed a regime that would secure the rights of the people.  "Regime" has taken on negative connotations in these latter days, but in its root meaning it is interpreted as 1) Ruling institutions or forms of government  2) Ruling persons (can be of good or bad character)  3)  Way of life of the governed people; our attitude and the way we think of our lives under a particular system of government.
So Regimes Matter!  In the Bible, God has a regime.  He is our Sovereign Ruler;  He has laws and ruling institutions; and the way we live our lives is influenced by how we feel as members of His system.  On the other hand, Iran has a regime.  Their people live another way of life, ruled by sharia law, and despotic rulers.  In forming our regime of government, the Founders recognized that the Balance of Powers played an essential part in securing our individual liberties.  Each branch of the Government governs by consent of the others.  A Balance of Powers forces the government to act slowly and deliberately.
Now our current administration has definitely acted deliberately, and I contend anything BUT slowly.  We have heard countless news conferences bemoaning our deadlocked Congress.  But James Madison, the father of the Constitution, asserted that legislative deadlock isn't necessarily a bad thing  --- he maintained that deadlock is better than legislative impulsiveness that tramples on our individual rights. 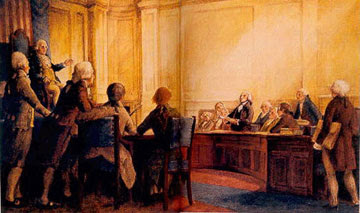 And he believed wholeheartedly that any legislation imposed on the people, should equally be shared by the rulers (legislators)....."If this spirit (a vigilant and manly spirit) shall ever be so far debased as to tolerate a law NOT obligatory on the legislature, as well as on the people, the people will be prepared to tolerate anything but liberty."  To this end, our liberties require vigilance and courage on the part of the people, in order to secure them.  I fear we have fallen down on the job!
And it is as if Madison had a crystal ball when he said, "Excessive changes in policy poisons the blessings of liberty itself, if laws are so voluminous they cannot be read; so incoherent they can't be understood; or if laws undergo such incessant changes that any man who knows the law today, can only guess what it will be tomorrow." Can you think of any better description of the Affordable Health Care Act?
It will be interesting to see how this conflict between the Executive Branch and the Judicial Branch plays out.  The strength of our Constitution is being tested, and I don't think I am being too harsh when I say it is under clear attack.  The question is this:  Do we have the "spirit" James Madison warned us would be requisite to save our liberties and our republic?  Will we fight for the Constitution that has sustained our freedoms and rights to self-determination these nearly 225 years?  If we don't have the courage and the character, then we don't deserve the blessings.

2 Chronicles 1:10       "Give me wisdom and knowledge, that I may lead this people, for who is able to govern this great people of yours?"
Posted by Pam Kohler at 7:00 AM