This Nation WAS Founded On Christian Principles!

Two nights ago, I sat in a packed theatre in a mid-sized Southern town and watched Kirk Cameron's self-promoted movie, "Monumental".  It was the story of the Pilgrims and their journey to America.  But it was a much different story than I was taught in my American history classes in public school.
Let me say that the first thing that struck me about this movie was the audience.  I can't remember the last time I attended a movie where people came as families to watch a screening.  Parents came as couples, bringing their children; and more often than not, they were accompanied by grandparents.  It was obvious to me that they wanted to experience this movie together, and they thought it's message important enough to explore together. 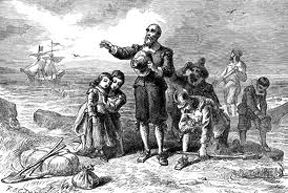 Cameron's enthusiasm for his subject was obvious and contagious.  But it was the personal aspect, supported by the historical facts of the Pilgrim experience, that was so powerful.  In England, the Puritans received the benefits of reading some of the first Bibles printed in English.  For the first time, the peasantry became aware that their rights were not transferred from God through the King.  They now could read for themselves that God granted personal liberty to everyone.  They became persecuted for their beliefs and fled to Holland.
They printed more Bibles from the relative safety of their new home and smuggled them back to England, spreading the liberating word of the Gospel.  But they were eventually imprisoned and forced to flee on a treacherous 66 day trip across the Atlantic, during the harrowing winter months, in a leaky ship that threatened to split apart in the violent and stormy seas.
That first winter, over half of them died!  It was from this small contingent of people, whose faith had carried them so far, that this nation was founded.  Over 400 years ago, they planted a seed of Liberty that was clearly nourished by Faith.  And lest the descendants of this land forget their heritage and the reason this nation was settled, over 200 tons of granite sits atop a hill in Massachusetts to remind us. 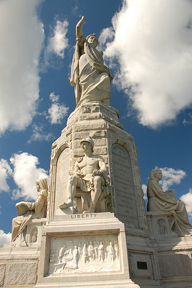 The National Monument to the Forefathers stands on the summit of Monument Hill. The heroic figure of Faith points to heaven, her foot on Plymouth Rock.  Below Faith are seated four statues:  Liberty with Peace flourishing under her protection, and Tyranny overthrown by her power;  Law is attended by Justice and Mercy;  Education has Wisdom on one side and Youth led by Experience on the other; and finally, Morality, between a Prophet and an Evangelist, holds the Commandments in her left hand and the scroll of Revelation in her right.
The Monument was designed by the Boston artist Hammatt Billings and is 81 feet high. The Pilgrim Society laid the cornerstone in 1859 and finally dedicated the finished monument in August, 1889. The total cost for this tribute to the "memory of the virtues, the enterprise, and the unparalleled sufferings of their ancestors" was over $150,000 and came from the Federal Government, the Commonwealth of Massachusetts, the State of Connecticut and 11,000 individuals.  So at least 250 years after the Pilgrims set foot on Plymouth Rock, this nation still extolled and honored our founding principles.
So what has happened in the 150 years since?  How have we forgotten and veered so far off course?  How can anyone say that we are not a Christian nation?  The movie ends with substantial evidence from historians and educators that America and Christianity are irrevocably intertwined.  From the actual words of our Founders to the mottoes of our first universities, God is a part of who we are.  And it's time we recognize Him again in this country.
As the audience in our theatre sat in silence during the closing credits of the movie, a woman's voice rang out.  She stood and asked for our attention.  She announced that she was a Catholic, and that her church had taken a pledge during the Lenten season.  She invited the audience to join them in praying each night at 8:00, between now and Easter.  She asked that we pray to God to forgive our sins of omitting Him from the consciousness of this land; that we ask for mercy and express our desire to once again make Him the center of this nation.  The audience's applause signaled our solidarity.  I invite each of you reading this post to join us.  For without God, this nation doesn't stand a chance.

2 Chronicles 7:14      "If my people, who are called by my name, will humble themselves and pray and seek my face and turn from their wicked ways, then I will hear from heaven, and I will forgive their sin and will heal their land."
Posted by Pam Kohler at 7:00 AM