A Force To Be Reckoned With

This past weekend I increased my confidence in being able to defend myself.  Although a SHTF scenario is always in the back of my mind, I live in the country, and I know that if I am threatened, there is more than likely no one that is coming to my aid in time.  I need to know that I can stop a threat if it presents itself, and that means man or animal. 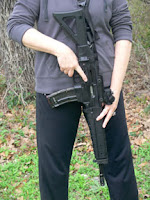 So with that in mind, I signed up for a 12-hour training class on Saturday and showed up at 8:00 with my brand new SIG522 semi-automatic rifle.  Now before all you guys start giving your opinions that your AKs and ARs have more man-stopping power, I totally agree!  But hear me out, and let me give you a few reasons why this .22, in a military-style platform, is the perfect self-defense rifle for your wife or daughter.
First of all, I was one of 25 shooters training that day, and I had no problem running my gun the entire 12 hours we were on the range.  There were a couple of 10-22's that went down; one broke a part and the other just quit running because of carbon and powder build-up.  There was also a Smith and Wesson M&P that was a disaster.  We had to stop the training for lengthy sessions while we first scoured the ground for a lost extractor spring, and then again when the extractor broke altogether.  There were two other Sigs along with mine, and we shot over 300 rounds that day, no stoppages.  The guys with the ARs had periodic problems; nothing major, but they can't claim the same success rate. 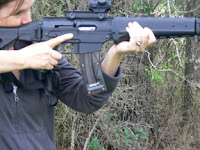 But one of the main reasons that I recommend this rifle is because it allows me to train for that many hours without the recoil of the full-size battle rifles.  I know that the Sig isn't a man-stopper and doesn't have the knock-down power of an AK or AR, but when I can increase my confidence by getting all my hits on the target and keep my gun running, I'm still a valuable asset in any fight.  There aren't too many bad guys that will be expecting a woman who can defend her home and do it with both precision and faith in herself.
I contend that a woman who can shoot a SIG522 and repeatedly hit her target, using a 25-round mag and a red-dot site is a greater asset than a woman who has trouble training all day with a full-size rifle and can't get her hits.  This rifle also allows me to get off 6 or 7 rounds of rapid fire with recoil management and hitting the target, versus 1 or 2 rounds fighting the recoil of the heavier rifles, and more than likely giving up accuracy.  The one thing I know for sure is this:  I can be a good support system for my husband with this rifle. 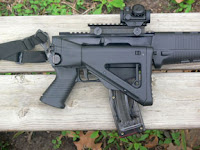 Another aspect of this rifle that appeals to me is the collapsible/foldable and locking stock.  It makes it easy for transporting and storage.  And consider this: the cost of my ammo.  I trained for 12 hours, shooting approximately 300 rounds at a cost of $24.  Other shooters using the AK or AR platforms, shot the same amount of ammo and it cost them around $84.  So owning a SIG522 benefits your wallet, too.  What husband doesn't find that factor appealing?
And if I still haven't convinced you, and you're hell-bent on diminishing the effectiveness of my new self-defense weapon, well......I invite you to step out there and let me zap you with a few rounds from about 10 yards and see if you still think it's not a man-stopper!  I may not be able to claim the cool factor, or massive firing power, and the sound of my .22 bullet "plinking" against the metal target isn't as formidable as a .223 round, but I guarantee you that I'll make my shots count when they have to and the bad guys will think twice about threatening me or my family.

Psalm 27:3     "Though an army besiege me, my heart will not fear; though war break out against me, even then I will be confident."