Gun Culture 2.0: OODA Loop and Getting Off The X

One of my greatest accomplishments this past year was completing the 3-day Defensive Training course offered by John Farnam.  I won't lie, I didn't get much sleep the night before we began the intense gun training.  I had heard the stories....both John and his wife, Vickie, were no-nonsense, passionate, and sometimes harsh instructors.  Did I even belong here, with men and women who knew more than I did?  Would I be able to perform to their expectations?  And most importantly, would I get yelled at? 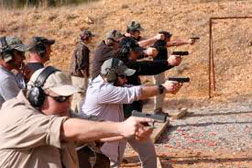 Because, you see, for more than 30 years John Farnam has been teaching defensive firearms techniques to police departments, federal and state agencies, and even foreign governments.  I knew I had a lot to learn!  And they are serious task-masters; there's no holding your hand or soothing words.  The information this man and his wife have to offer has been battle-tested, so to speak, and what they teach you can save your life.  Today, I want to share a couple of the important concepts they taught us.
I can hear John's booming voice in my head:  "You need to understand that, when you are attacked, the assault is taking place for two reasons:
1)   The attackers believe they have something to gain, and
2)   You are where the attackers want you to be.
In order to give ourselves the greatest advantage for staying safe, John and Vickie taught us to apply a method called OODA Loop.  This is what it stands for: 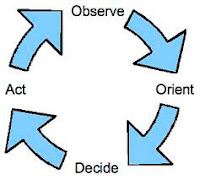 OBSERVATION --  Scan the environment and gather information from it.

ORIENTATION --  Form a mental image of your circumstances.
DECISION --  Consider options and select a subsequent course of action.
ACTION --  Carry out your decision.  Once the result of that decision is observed, you start over.
So what are we to take away from all this information?  First of all, we have to realize that most criminals will pick out their victim and then stalk them until they perceive they have them in a weak position.  They will then begin to get aggressive, probing for an advantage, and then proceed to a full-on attack.  You need to get this picture!  The bad guys wouldn't be attacking if you weren't where they wanted you to be.
If you're aware of your surroundings, you should pick up on this threat and get to a place where the criminal doesn't want you to be or didn't expect you to go --- such as a strong covered position (perhaps, behind a parked car, or a low wall).  But you need to remember something else, and again I hear John's direction:  "Anyone, in any position, armed with any weapon, can be successfully attacked, provided attackers are willing to pay the price."  His advice?  "Make the price so high, that no sane attacker will press the issue."
So, if I've picked up on the threat, put some distance between me and my attacker, and positioned myself behind some protective covering....and he's still advancing, what do I do?  John and Vickie offered a simple, but effective method of frustrating your attacker.  Remember that if your attacker is still pressing forward, he perceives that he has the advantage.  The simple act of quickly moving laterally; taking a step or two to your right or left, is always advisable, no matter what your situation.
Just getting away from where you were positioned will frustrate the attack plan of most criminals.  You have to take the advantage away from the attacker.  The second or two it takes him to adjust to your move, could give you the time to successfully fire and stop the attack.  John refers to this method as "Getting Off the X!" 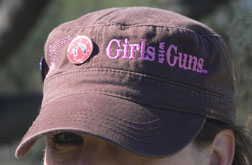 Applying this method, after implementing OODA Loop, can quickly stack the deck in your favor.  We practiced different scenarios of being approached by a potential attacker; how to be observant, orient ourselves to the situation, decide how to act, and then follow through.  And over and over and over, you heard, "MOVE!  Get off the X!" I want you to get this!  By moving off the X, you instantly take the advantage away from your attacker. And that simple move can save your life.
After two days of this repetitive training, it stuck.  I graduated with my Red Pin; a symbol that proclaims to all that I have successfully completed a Farnam Defensive Training course.  I have to admit.... I walk a little prouder now!

Deuteronomy 23:14    "For the LORD your God moves about in your camp to protect you and deliver your enemies to you."