I recently saw an interview with Kevin Freeman, financial analyst and author of a 2009 paper for the Department of Defense, titled Economic Warfare: Risks and Responses, and a new book titled, Secret Weapon: How Economic Terrorism Brought Down the U.S. Stock Market and Why It Could Happen Again.  Got your attention?
I want to make it very clear that I am no financial wizard; I'm just an American woman who is paying attention and becoming increasingly alarmed at the vulnerability of our economic status.  Unless you're living on Mars or have your head buried 10 feet underground, it's apparent that we (and the world) are teetering on the edge of economic collapse. 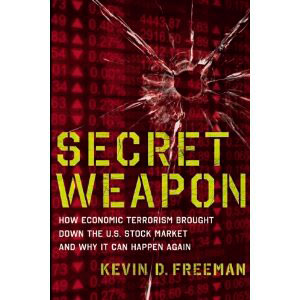 Mr. Freeman hasn't really uncovered some new diabolical plot, but seems to have connected the dots in a murky and confusing sequence of events.  In the rearview mirror, we have always viewed 9/11 as the actions of radical Islamic fanatics, who hated the West and were bent on destroying "the infidels" and "the Great Satan".  But Mr. Freeman carries that theory a step further and introduces the proposition that besides fanatical religious ideology, there was an economic objective in the evil plot, and it is not the only maneuvering that is taking place to destroy the economy of the United States and the West.
Osama Bin Laden made no secret that "attacking the U.S. economy is our goal."  But what if he was not the only player?  Who else could be involved?  I have to admit that this runs so deep, and is so complicated that I will never understand it's full implication, but I'm not stupid.  I can see the veracity of some of Mr. Freeman's conjectures, and they make sense to me.
The West's dependence on foreign oil has left us VERY vulnerable to economic attacks, and it doesn't take a genius to see that a conglomeration of Islamic States could control us at will.   Our reliance on foreign oil for our massive transportation system, and our reluctance to pursue drilling our own massive reserves, OR explore alternative energy sources leave us wide open to attack on several fronts.   I mean, when we use over 20,000,000 barrels of oil a day, wouldn't you say we have put a big bulls-eye on ourselves?  The fact that Iran and Venezuela are playing "buddy-buddy" and attempting to control the oil reserves in the Middle East and elsewhere should make us all lose sleep.
And I was stunned to discover that Russia and China owned our Freddie Mac and Fannie Mae bonds, which put us at great risk, and may have contributed to our financial crisis in 2008.   Apparently Fed Chairman Bernanke was aware that they had discussed dumping these bonds.  I have only heard Mr. Freeman speak, and have not read his book yet, so I don't know the details of all these schemes and the plot to destroy us economically--- what he calls "Phase One".  But I do know that the corruption appears to run deep.
Mr. Freeman reveals in "Phase Two" that Sovereign Wealth Funds of foreign countries, (mostly in the Middle East - no surprise!) have undertaken major market manipulations--- like naked short selling, high frequency trading, etc. --- and used our rules against us.  He even alleges that Nasdaq was hacked, which helped bring the markets down in 2008.  Combined with attacks on European markets and  "Sharia-complicit trading" (more on this term in a future post), the economies of the world are under full-blown attack.
According to the author, we are now involved in "Phase Three", where Brazil, Russia, India and China are trading in their own currencies, and we are seriously threatened with losing our Reserve Currency.  If that happens....well, let's just say we don't want to go there!   Finally, he hints that a "nontransparent and hidden (dark) market" exists--even more manipulation!  Who is it?  I don't know, and an even scarier thought emerges..... what can we, the average American citizen, do to protect ourselves against all this intrigue and maneuvering?  Well, you will have to tune in on Monday, to see what, if anything, Mr. Freeman offers us.  In the meantime, I suggest you go to Amazon and order Secret Weapon , and another insightful book, Confessions Of An Economic Hitman.
Don't cower in the corner.  Become informed and know what we're dealing with.  And remember that God is in control!

Psalm 5:10-11      "Declare them guilty, O God!  Let their intrigues be their downfall.  Banish them for their many sins, for they have rebelled against you.  But let all who take refuge in you be glad; let them ever sing for joy.  Spread your protection over them, that those who love your name may rejoice in you."