How They See Us

My husband and I recently had an interesting conversation with some new friends from Canada.  The husband is an extraordinarily successful leader in a major corporation.  He is in charge of coordinating business in the States in a highly profitable sector of the economy.  His wife is equally interesting, with a keen, intelligent, and perceptive mind.
As we spent an evening together, getting to know each other, they revealed some very insightful impressions of Americans.  They began by remarking on the unique and unparalleled characteristic of Americans......"when the chips are down, you come together and get the job done."  They felt that Americans, while seemingly polarized, will back each other up when attacked from the outside.  They acknowledged that there is something in our American DNA that sets us apart; a fearless attitude that is quite admirable. 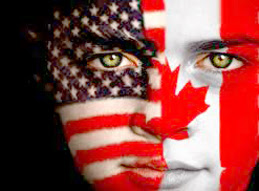 At the same time, they were also appalled at the lax way in which Americans live on credit, seeking instant gratification, often to the detriment of their future.  They said they noticed that Americans feel they are "entitled" to have whatever they want, regardless of whether they need it or can afford it.  While admitting that Canada has become increasingly Socialist, and the government provides everything from health care to a college education, they stated that Canadians were better at living within their means and saving for the future.  They find it hard to understand people living in bigger houses, driving bigger cars, and piling up college debt and loans that they obviously cannot afford.  And careless spending practices are not limited to American citizens.  Our government has gone off the deep end, too!  Our new friends said they fear that a reckoning is headed our way, and we could soon be facing the extremely high tax rates that Canadian citizens suffer in order to pay off our national debt.
You may find it hard to believe, but where we stood politically was never a part of the conversation.    We could agree that there appears to be a decline in the image of America, and that the media is duplicitous.  In fact, we agreed across a wide range of topics; and one would have been hard-pressed to put any of us in a solid political category.  We agreed that we must  know where we stand on issues, but blind ideology must never stifle the conversation.
Equally hard to understand, for the four of us, is the seeming ease with which we are giving up our sovereignty to other nations.  Allowing China and Japan to own American conglomerates, while impeding the growth of American businesses with ever-increasing regulations, is just plain perplexing!
We have an election coming up in 2012 in which the country is extremely focused.  The economic crisis, the high unemployment rate, and the high cost of health care are at the top of American's list of important issues.  Also, there is an increasing lack of trust in our politicians and many Americans feel their representatives are more interested in looking out for themselves and their government pensions than they are the constituents who sent them to Washington.
So I guess my question to all of you is this:  Will we sit idly by while what makes us "uniquely American" is bred out of us?  What will it take to make us all come together to work for the common good and for the country?  Is America worth saving to you?  Our Canadian friends definitely think it is.  Even with all of our faults, we are still desirable to the rest of the world.  Let's pray that we will do what we have always done, and come together to restore the values and principles that have been taken for granted for far too long.  One thing is for certain...if we don't fight for our country, we are going to lose it!

Psalm 4:4-5    "Tremble and do not sin; when you are on your beds, search your hearts and be silent.  Offer the sacrifices of the righteous and trust in the Lord."
Posted by Pam Kohler at 7:00 AM