Hotter Than A Pepper Sprout!

I don't know why, but that line from the old Johnny Cash/June Carter song, Jackson, just struck me as an appropriate title for this post.  Because today I'm going to be talking to you about pepper spray. 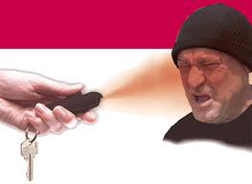 You may remember that my husband and I recently completed a DTI handgun training class with John and Vicki Farnham.  This was really a memorable event for me.  One thing we discussed was that in addition to carrying a concealed pistol, making us capable of delivering deadly force, we (the trained and armed) should also carry a non-lethal method of defense.  Why?
A non-lethal method allows us to defend ourself when the level of lethal force is not met.  How about the friendly drunk who isn't a deadly threat, but has pushed things a bit far?  How about the belligerent unarmed homeless guy who doesn't take no for an answer?  Or the teenage thug stealing your golf clubs out of your garage?  The moral issue of who and when we shoot can get very murky, very quickly.  None of these scenarios rise to the use of deadly force.  But a quick non-lethal dose of pepper spray could, in most cases, stop the perp and let you continue on your way without a D.A. barking up your tree.  And remember, the use of deadly force should always be your last resort in safely exiting a situation.
So you're thinking, what's the big deal?  Pepper spray is pepper spray, right?  Well, after doing a considerable amount of research, I realized that there are lots of brands on the market, and more than half of them may not be as effective as you would like OR need them to be.
The first thing I learned is that pepper spray is effective because it is made from the oil of red peppers.  But the most important fact I learned is that it's not the amount of pepper that is in the spray, but the strength of the entire formulation, or in other words, how many Scoville Heat Units (SCU) the spray is.  Unfortunately, this is an unregulated market, so the effectiveness of different sprays can vary widely. 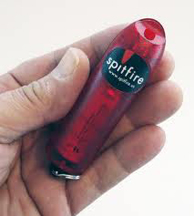 The spray that I recommend is called Spitfire, and I like it for several reasons.  First of all, as a keychain canister, it is compact, easy to carry and easy to engage. It pops right off your keychain, so there is no fumbling with your keys if you are driving.  Also it sprays a wide arc, or fog of spray, so there's no worry about precise aiming.  It contains Sabre Red pepper, which is the strongest and most effective on the market.
The other reasons I like this product is that it has an 8-foot range; it is refillable; it has a heat rating of 2 million SCU, which means it burns like hell; it has an 8-foot cone pattern and the effects last 30 minutes, giving you plenty of time to escape the situation; it stays effective for 2 years; and it has a quick release on the keychain, along with a child-resistant design.  And the fact that it is made in the U.S. is an extra bonus.  And if these aren't enough reasons, it will allow you to adequately defend yourself and escape without any need to draw a weapon.
I advise you to watch this video, which shows you the effectiveness of this product.  It should put your mind at ease about feeling adequately protected in a variety of situations.