You Will Be My Witnesses 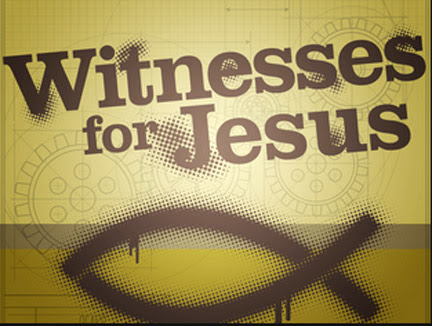 This day after Thanksgiving, I find myself meditating on the future; specifically how we Christians are fulfilling our commission from the Lord to be His witnesses to the end of the earth. That's a very serious request made to each of us! And what does it mean to be "His witness"; to witness about Him to another? As I considered the definition of what constitutes a witness, it struck me that there is a difference between being a witness in the sense of a noun, and being a witness in the sense of a verb.

If you identify as the noun form of witness, then you are likely to be stationary; an observer, a spectator, a viewer/watcher. If you align yourself with those who approach being a witness as a verb, then the definition is different -- the dictionary actually portrays movement as you become a witness. You begin by being an observer and a watcher, then move into undergoing an experience, and end up endorsing and validating. To me, that implies that becoming a witness for Jesus involves receiving the power to make that progression. We all know that power to be the Holy Spirit!

And my inspiration for approaching just what kind of witness I want to be for my Lord comes from a note I received from Asher Intrater, President of Revive Israel, an Israeli Messianic Jewish organization that seeks to spread the Gospel of Jesus Christ and His Kingdom to those Biblical "ends of the earth". Asher reminded me of Paul's declaration [near the end of his life] that he had "finished his race" and met the goals set before him by the Lord. And that spoke to my spirit of Hebrews 12:1, which says, Therefore, since we are surrounded by so great a cloud of witnesses [who by faith have testified to the truth of God’s absolute faithfulness], stripping off every unnecessary weight and the sin which so easily and cleverly entangles us, let us run with endurance and active persistence the race that is set before us... Can you see the action and progressive faith in this call to run our race?

Asher reminded me that in a race, each runner has a starting and ending point. These points both anchor and propel the runner to intimately know his or her race, plot out the track, and then aim precisely for the tape at the end of the race, breaking through it for their victorious ending. But how are we to accomplish this race and the goal of being a quality witness for the Lord, who has given so much to us? What kind of witness am I destined to be? Jesus speaks to the Disciples [who have gathered in the Upper Room after His resurrection] that they don't need to be concerned where they are on the timeline of the earth's existence, but "you shall receive power when the Holy Spirit has come upon you; and you shall be My witnesses both in Jerusalem, and in all Judea and Samaria, and even to the remotest part of the earth" (Acts 1:6-8).

Now, you may be thinking, "But that was  for THOSE Disciples! That power had to be greater for the tremendous calling they were given"! And you might be asking if this verse even applies to you? So, I have a question for you -- isn't it the same Spirit, and the same Lord who exists today? And isn't the need for witnesses of Jesus just as great today? And here is the really important question ... Can you believe that promise in Acts 1 is for you?

I want each of you reading this post to know that the world is desperately in need of witnesses that testify to the power and authority of Jesus in their lives. People need to hear of the ways He has worked miracles and wonders in your life; changed your circumstances from poor [by worldly standards] to rich in spiritual wealth; and restored lives that were torn asunder and discarded.

Too many of us have been convinced that all the work has been done because Jesus declared on the Cross that "It is finished". Too many think our job now is to wait patiently for Him to return and whisk us out of this cruel world. But that's not experiencing the fullness of our relationship with God! And I want to state that it is so important that we not be afraid of experiencing God! Being a bold witness for God is the highest calling of our lives. With the power of the Holy Spirit, you can have the strength, the courage, the capabilities, and the deep faith/conviction to be passionate witnesses for Christ!

And remember that analogy of a race well-run? Effective and impactful witnesses for the Lord Jesus will bear fruit in their lives. At the end of the race, there will be testimonies of salvation among those they witnessed to. The seeds they sowed along their track will result in generations declaring that the Kingdom of God is here! Seeing others being Born Again, and then seeing and entering the Kingdom, will propel them across the finish line. It's just as it was when Jesus called those 12 men to become His witnesses ... Disciples making Disciples! Being a witness is not just something we do; it is who we are! It is our spiritual identity!

My final thought: As the Holy Spirit witnesses to our spirit, may we all run our race as part of Jesus's long distance relay team. Let us run our predetermined distance, stretching with all our might to pass the baton to the next person on Jesus's team so they might continue their race with power and confidence. And let us be convinced, as we witness, that God will empower our efforts and we will be part of the crowd of witnesses that has gone before us, each generation serving to encourage the next that God will see His Gospel taken to all the nations, tribes, peoples, and tongues. Amen!

2 Timothy 2:1-2    You then, my child, be strengthened by the grace that is in Christ Jesus, and what you have heard from me in the presence of many witnesses entrust to faithful men, who will be able to teach others also.

Email ThisBlogThis!Share to TwitterShare to FacebookShare to Pinterest
Labels: End of the World, End Times Prophecies, Witness for Jesus